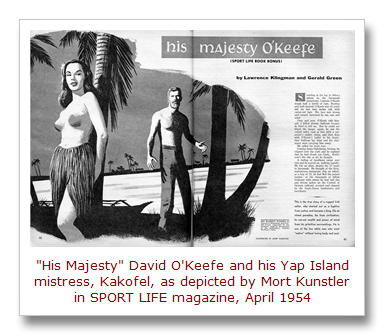 My plan to post another set of Norm Eastman paintings from the Rich Oberg collection today changed when I got a surprise email from Jane Kunstler, daughter of legendary artist Mort Kunstler.

She told me Mort wanted me to call him. Naturally, I jumped at the chance.

In the 1950s, 1960s and 1970s, Mort Kunstler was one of the best and most prolific illustration artists in America. Since the 1980s, he has focused on historical paintings.

Today, he’s especially known for his Civil War paintings and is considered one of greatest living historical artists in the world.

Some of illustration art Mort created between the late Fifties and late Seventies appeared in top tier periodicals like National Geographic. But much of the vintage magazine art he did was for men’s adventure magazines.

Among fans of that genre, Mort is probably best known for his cover paintings. (Click here to see some cool examples.) Occasionally, he also did interior illustrations for men’s pulp mags. And, last year I did a post about a superb series of interior illos Mort created for the condensed “Book Bonus” version of the novel His Majesty O’Keefe, published in the April 1954 issue of Sport Life magazine. 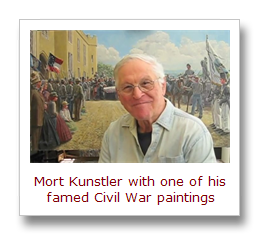 When I called Mort on the phone, I found out that post was one of things he wanted to talk to me about.

I had written that Mort’s O’Keefe illustrations look like they were done using the scratchboard technique. Mort told me they were actually done with black, gray and white paint on illustration board. He said he probably used a drybrush technique, which accounts for the “scratchy” look of some of the details.

I had also written that Mort did “hundreds — probably thousands — of cover paintings and interior illustrations for men’s adventure magazines.” Mort told me he didn’t know exactly how many he did, but it was between one thousand and two thousand, not “thousands.”

On the call, I asked Mort if he’d be willing to do an interview with me about his work for men’s adventure magazines. He said he would. I plan to schedule that interview soon and do a series of posts based on it, like the series I did after I interviewed Gil Cohen — another great artist who created hundreds of cover paintings and interior illustrations for men’s pulp mags.

For those readers who missed my original post showing Mort Kunstler’s illustrations for His Majesty O’Keefe, I’m reposting them today. As you can see from the two-page spread above and the other examples below, they’re masterfully done. 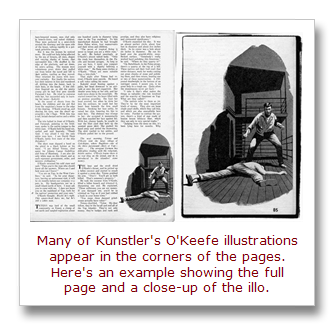 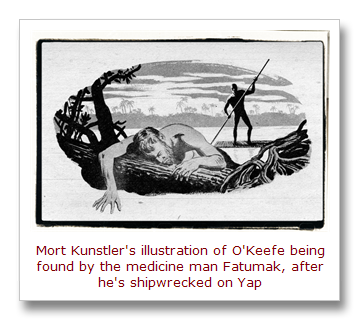 The book His Majesty O’Keefe is a South Seas adventure novel that was made into a rousing movie starring Burt Lancaster. It’s based on the true story of — and legends about — an Irish-American sailor and entrepreneur named David Dean O’Keefe.

In 1871 O’Keefe sailed from Savannah on a merchant ship to the South Pacific. According to legend, he was shipwrecked on the exotic island of Yap the following year. (In reality, he probably just landed there).

O’Keefe finds out that Yap could be a major source of copra — the dried coconut meat used to produce coconut oil, a highly valuable commodity at the time. However, the islanders had little interest in working to harvest large quantities of copra or in the goods German and Spanish traders offered them in exchange. 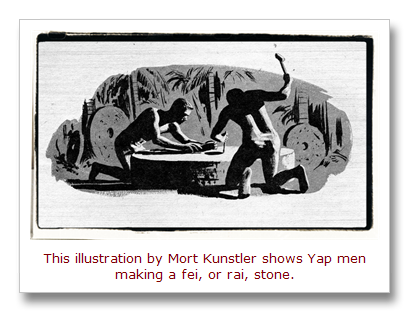 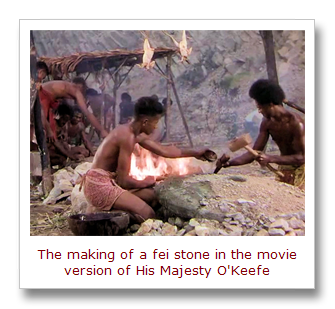 O’Keefe also learns that the most valued form of currency on Yap are large circular stones, called rai, or fei. The production of this unique stone money required Yap men to travel by sea to a quarry on faraway Palau to mine the stones, then bring them back via canoe and raft. It was a difficult, dangerous and often fatal enterprise.

This gives O’Keefe an idea. He finds a partner in Hong Kong who gives him the use of a large junk (a Chinese sailing ship). Then he strikes a business deal with the Yap Islanders. 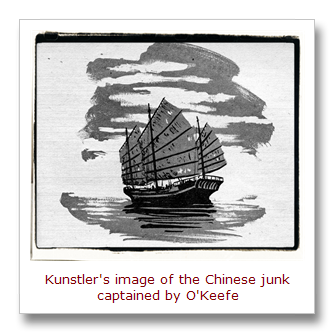 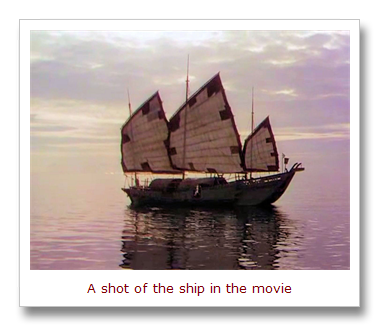 He takes Yap men to the Palau quarry on his Chinese junk, gives them modern tools and gunpowder to speed up the quarrying process, and transports them and the big fei stones safely back to Yap on the ship. In return, the Yap islanders provide O’Keefe with huge quantities of copra that he sells in Hong Kong, making him rich.

Along the way, O’Keefe makes an alluring Yap babe his mistress, marries the beautiful half-breed daughter of white businessman on another island, gets caught in a love triangle between the two women, and has violent run-ins with hostile natives, rival copra traders and the infamous pirate Bully Hayes.

As legend and the novel have it, he ultimately becomes viewed as the King of Yap — thus “His Majesty O’Keefe” — creating one of the prototypes for future “white king” stories common in adventure novels and men’s adventure magazines in the 1950s and 1960s.

His Majesty O’Keefe was written by Gerald Green and Lawrence Klingman. Green went on to become a highly successful novelist and screenwriter, and co-creator of The Today Show.

Klingman’s career seems to have peaked with the publication of the O’Keefe novel.

The first edition of His Majesty O’Keefe was published in 1950 by Charles Scribner’s Sons. It has been reprinted several times since then in hardcover and paperback editions. 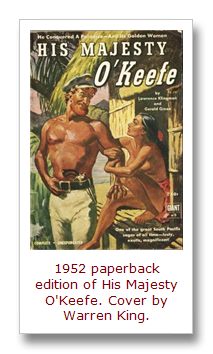 My favorite is the 1952 Universal Publishing “Giant” paperback edition.

That one features a cool, pulpy cover painting by Warren King, an artist who is best known for his political cartoons and comic book art. The Giant edition also has a classic pulpy cover blurb: “He Conquered A Paradise — And Its Golden Women.”

In 1954, the same year the Sport Life published the condensed version of the novel, the movie adaptation of His Majesty O’Keefe was released by Warner Bros.

It was filmed in Fiji over a period of eight months and generally follows the storyline in the novel.

If you haven’t seen the movie, seek it out. It’s a rousing South Seas adventure flick. (It’s available on DVD and is sometimes shown on the Turner Movie Channel, which has a trailer on its site.)

As the stills shown below suggest, the setting is exotic, Burt Lancaster is at his buff, manly peak as O’Keefe, and his leading ladies — Tessa Prendergast as the dusky Yap beauty Kakofel and Joan Rice as O’Keefe’s wife Dalabo — are both gorgeous.

Of course, since it was made in the Fifties, the movie had to leave out the topless women and the sexiest scenes depicted in the novel and Sport Life’s illustrated book bonus version. 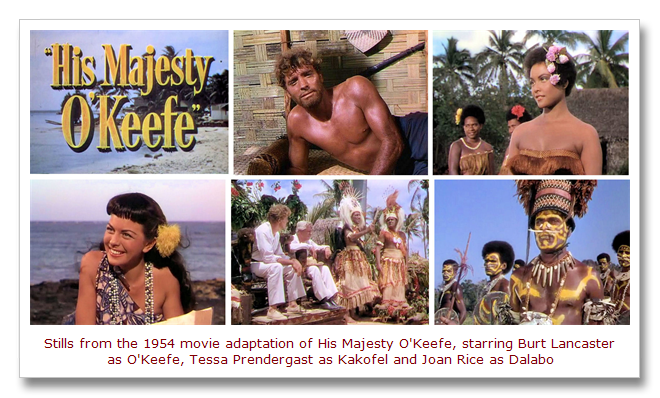 However, like the book, the movie did spawn some cool art, such as the posters shown below.

The original Warner Bros. poster is a classic. But the French and German posters are my favorites. The French title for the film is Les Roi Des Iles, literally “King of the Islands.” The Germans called it Weiser Herrscher Uber Tonga, which means “White Ruler Over Tonga.” (I guess Tonga sounded better to the German distributors than Yap.) 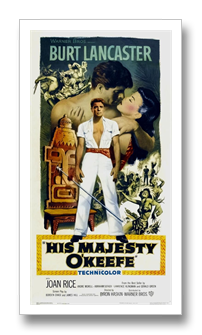 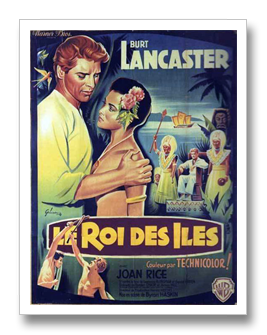 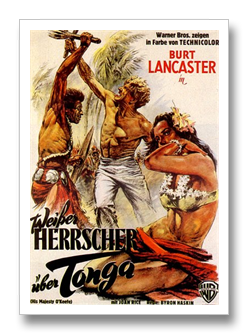 If you’re a fan of exotic adventure, I highly recommend that you seek out copies of both the novel and movie version of His Majesty O’Keefe.

By the way, I know that Mort spells his last name with an umlaut accent mark above the u, like this — Mort Künstler. However, most people tend to spell his name without it. As a result, if you Google “Mort Kunstler” without the umlaut you get about 186,000 hits, compared to 9,870 hits if you use “Mort Künstler.” On this blog, I’ve decided to use the spelling that’s mostly likely to show up in searches.

Thanks again to Jane and Mort Kunstler for contacting me. I look forward to doing an interview with Mort in the near future.