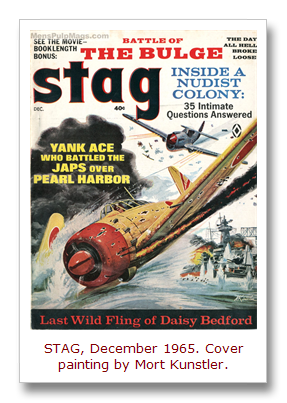 Every year on the anniversary of the December 7, 1941 attack on Pearl Harbor, I think about my favorite men’s adventure magazine story about that fateful event: “YANK ACE WHO BATTLED THE JAPS OVER PEARL HARBOR.”

The story was published in the December 1965 issue of STAG, one of the best mags in the genre in the 1950s and 1960s (before it morphed into a HUSTLER clone).

It was written by the late Robert F. Dorr, one of the best writers who worked for the men’s adventure magazines.

I was a fan of Bob Dorr’s gritty, realistic men’s adventure stories before I met him. I talked about him in some of the earliest posts I did on this blog.

Bob noticed those early posts and contacted me.

We struck up a long distance friendship that lasted for about five years, until his death from brain cancer on June 12, 2016.

Shortly before Bob died, my publishing partner Wyatt Doyle and I had the honor of working with him to publish an anthology of some of the great war and adventure stories he wrote for men’s adventure magazines.

It’s titled A HANDFUL OF HELL, after one of the stories it includes (about World War II Medal of Honor recipient, Air Force Staff Sergeant Henry “Red” Erwin).

There are more two dozen other great Dorr short stories in the book, along with full color reproductions of the cover and interior artwork and photographs that went with them in the men’s adventure magazines they first appeared in. 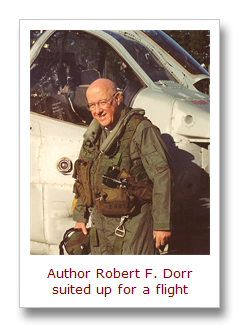 One of the stories is “YANK ACE WHO BATTLED THE JAPS OVER PEARL HARBOR.”

Like the “HANDFUL” story, and many others Bob wrote for men’s adventure periodicals back in the day, it’s based on fact.

Bob Dorr was an avid fan of airplanes from an early age. He served in the U.S. Air Force in Korea, then became a Foreign Service officer for the State Department.

He had a vast knowledge of military planes and history and a deep respect for the men and women who served in military.

After the MAM genre faded away in the mid-1970s, Bob went on to become a top military aviation historian.

He wrote more than 70 books about military aircraft and key roles they played in World War II, the Korean War and the Vietnam War.

Among my favorites are those that focus on the personal stories of pilots and crews who served in World War II, such as HELL HAWKS!, MISSION TO BERLIN, MISSION TO TOKYO and FIGHTING HITLER’S JETS.

All of the history books written by Robert F. Dorr are heavily researched and full of fascinating facts and statistics.

They are also illuminated with first hand accounts by servicemen who flew the missions described in the books, taken from diaries, letters and other sources and from interviews Bob did with hundreds of pilots and crew members he sought out. And they are full of gripping, jaw-dropping, ball-shriveling anecdotes about the bravery and sacrifices of those pilots and crew members.

The same basic elements are present in Bob’s men’s adventure magazine stories. But there is a difference. 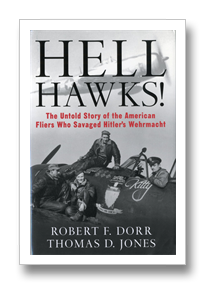 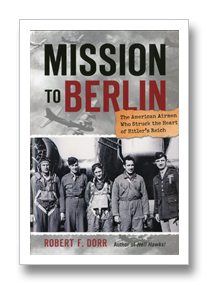 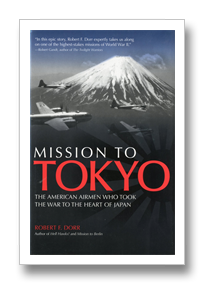 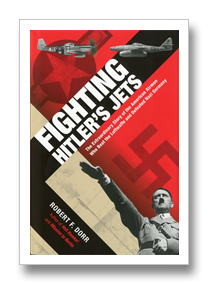 He wrote the MAM stories in his spare time, first while working in various jobs before he served in the State Department and then during his worldwide travels as a Foreign Service official.

For his men’s adventure stories, Bob did what research he could using the books, newspapers and magazines he had access to.

He was already an expert on military aircraft and well-steeped in military history. But before he left the Foreign Service in 1989 and became a full-time professional writer, he couldn’t spend a huge amount of time doing research.

Moreover, when he was writing men’s adventure stories in the ‘50s, ‘60s and ‘70s there was no internet that made information about every topic easily accessible, no email, no nationwide database of phone numbers, no websites listing members of various military and how to contact them.

Thus, while most of Bob’s men’s adventure magazine stories are based on historical facts and the descriptions of planes and other military elements are almost always accurate, he often used his imagination to create quotes and certain story details even in stories involving real people.

“YANK ACE WHO BATTLED THE JAPS OVER PEARL HARBOR” is a good example. 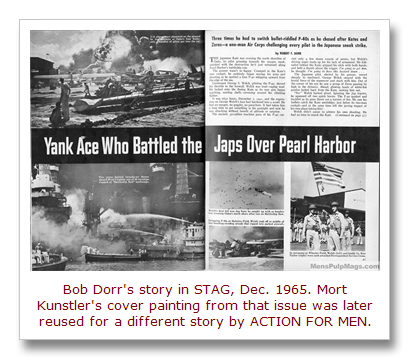 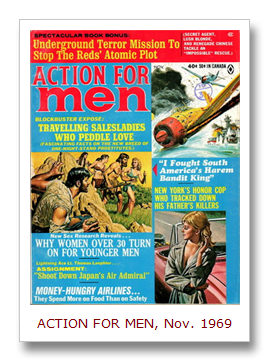 The story focuses on George Welch, a real-life hero who was of the few American fighter pilots who were able to engage the Japanese planes that were attacking Pearl Harbor on December 7, 1941.

Like many of Bob’s stories, it was the featured cover story on the issue it appeared in and the cover painting that went with it was done by one of the greatest of the many great illustration artists who worked for men’s adventure magazines, Mort Kunstler. (Kunstler’s Pearl Harbor painting was later recycled on the cover of ACTION FOR MEN, November 1969.)

Inside, the story is illustrated with historic photos taken during the attack on Pearl Harbor and photos of Welch and his buddy Ken Taylor being awarded the Distinguished Service Cross for their bravery during the attack.

The basic facts in “YANK ACE WHO BATTLED THE JAPS OVER PEARL HARBOR” are true. Some of the quotes are taken from historical sources. But Bob couldn’t and didn’t interview Welch or Taylor for the story.

So, as he often did at the time, he used his vivid imagination and made some stuff up, creating a ripping yarn that largely true but part fiction. Bob used the same approach in several of the other MAM stories about American war heroes we reprinted in A HANDFUL OF HELL.

The book also includes some of his rip-snorting action and adventure fiction stories. One that seems timely to mention in light of the recent death of Fidel Castro is “I FOUGHT CASTRO’S CUTTHROAT GUERRILLA SQUAD.” 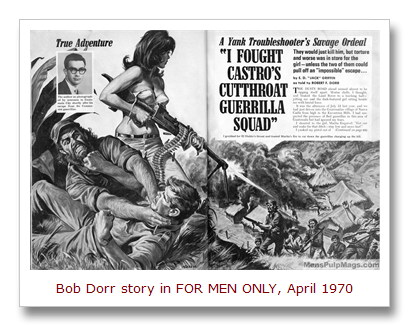 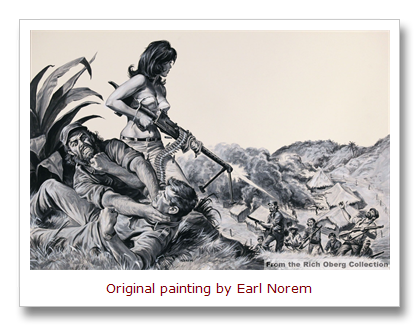 It was originally published in the April 1970 issue of FOR MEN ONLY and features an illustration by another great illustration artist, Earl Norem. (The original painting now resides in the collection of my friend Rich Oberg.)

A third type of men’s adventure magazine story Bob wrote was the news-style exposé. These usually have some basis in fact. But they are typically sensationalized with imaginary people, events and anecdotes and further spiced up with pulpy artwork or with photos picked to enhance both believability and “shock value.”

One of my favorite examples of a Bob Dorr exposé that I featured a past post on this blog is “INNER SECRETS OF THE INTERNATIONAL COCAINE COMBINE”, in the July 1971 issue of BLUEBOOK.

But much of it comes from Bob Dorr’s imagination. And the photos seems more laughable than believable. 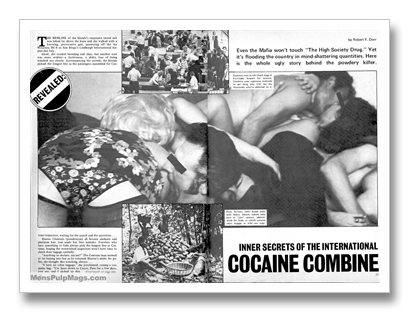 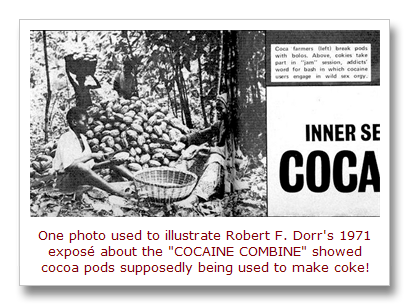 In reality, the pods are from the cacao or cocoa tree. They are used to make chocolate — not cocaine. As most people know today, cocaine is made from the leaves of coca plants. In 1971, the editors of this story were either clueless or it was an inside joke they figured most readers back then were unlikely to catch.

Another men’s adventure mag exposé written by Bob is one of the bonus stories included in the deluxe hardcover edition of A HANDFUL OF HELL.

It’s what I call a “sexposé” and first appeared in from MAN’S MAGAZINE, June 1965. It’s about the “SEX LIFE OF OUR GIS IN GERMANY.”

Bob talked about such sexposés in his introduction to HANDFUL (which you can read excerpts from here). He said:

“For the men’s adventure magazines I wrote some articles about well-known American heroes, like Medal of Honor recipients. But generally they were war and adventure stories with a realistic-sounding factual type background. Those were the most common thing I wrote for the men’s pulp magazines until the magazines started changing in the late 1960s. As they evolved to compete with magazines like PLAYBOY and HUSTLER, they had covers with photos showing fully exposed female nipples instead of painted covers and the types of stories changed. So then I also began writing sex stories. Most were sex exposé stories like the “SEX LIFE OF OUR GIS IN GERMANY,” and “BEHIND THE SCENES OF BUDAPEST’S SEX REVOLT” and “THE EROTIC STEWARDESS TAPES.” I think people often do too much over-analyzing of such stories. I wrote many for the men’s pulp magazines and it would involve too much analyzing for me to say a great deal about them. But I can tell you there was no first hand research involved.” 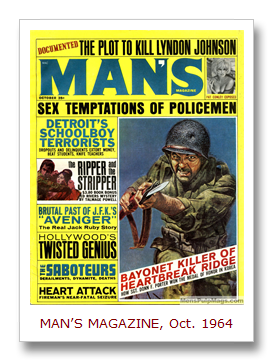 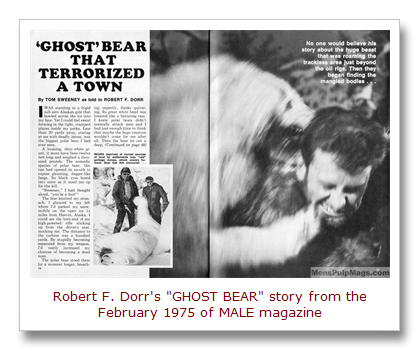 I should note that we also included two classic Robert F. Dorr stories in the first book in our Men’s Adventure Library series, WEASELS RIPPED MY FLESH!

One is a Korean war story from MAN’S MAGAZINE, October 1964: “BAYONET KILLER OF HEARTBREAK RIDGE.” 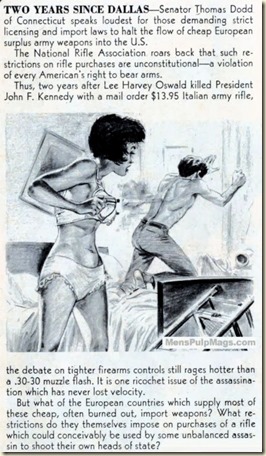 The other is an unusual example of a men’s adventure animal attack story that is sympathetic to the animal: the “‘GHOST BEAR’ THAT TERRORIZED A TOWN,” originally published in the February 1975 issue of MALE.

I will also note that the December 1965 issue of STAG, which includes Bob Dorr’s Pearl Harbor story, is one of the complete issues I offer as a download in PDF format in my Payloadz store.

It’s a truly great issue for a MAM fan.

In addition to Bob’s story, it contains many other men’s adventure treasures, like great illustration art by Earl Norem, Bruce Minney (“The Man Who Painted Everything”), Mort Kunstler and Samson Pollen.

Another thing that caught my eye in that issue is a news item about the debate over gun control that developed after President John F. Kennedy was assassinated by Lee Harvey Oswald with a mail order rifle.

It’s quite interesting from a historical perspective, regardless of which side of the gun control debate you’re on.

But even more interesting for fans of retro pop culture is the scantily-clad babe in the illustration.

She’s blasting away at some shirtless guy with a “bra gun” like the one Ursula Andress used in the 1965 movie THE TENTH VICTIM.

Coincidentally, THE TENTH VICTIM was released in the US in December 1965.

You may also recall that a variation of the bra gun, sometimes called “nipple canons,” were built into a fembot in the 1997 movie AUSTIN POWERS: INTERNATIONAL MAN OF MYSTERY.

More recently, a bra gun was used by Sofia Vergara in the 2014 grindhouse-style flick MACHETE KILLS.

Coming back full circle to the attack on Pearl Harbor on December 7, 1941, here’s a link to a post on one of my other blogs, ThisDayinQuotes.com, that discusses the origin of a famous saying that was coined that day by Navy Chaplain Howell M. Forgy: “Praise the Lord and pass the ammunition!”

Respect to him, to the 2,403 American servicemen who were killed in that attack, to all of the men and women in the Armed Forces who have served and currently serve our country, and to my dearly-missed friend, Robert F. Dorr.