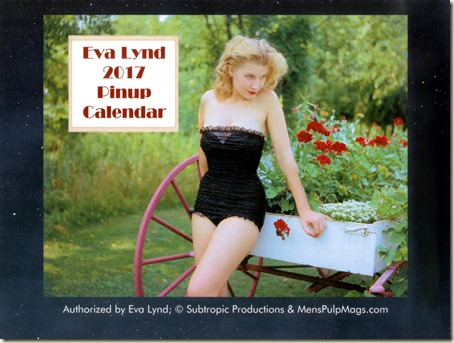 One of the nicest things that has happened to me as a result of writing this blog about vintage men’s pulp adventure magazines was getting an email from model and actress Eva Lynd a few years ago, after I did a series of posts about her multifaceted career.

As noted in those posts, Eva was, among other things, a favorite model of two top men’s adventure mag artists, Al Rossi and Norm Eastman.

She often posed for Al and Norm with their favorite male model, the legendary Steve Holland. Holland’s manly image appears in hundreds of MAM cover and interior illustrations and countless paperback cover paintings.

Through my conversations with Eva, I learned that she also posed for other great illustration artists, such as James Bama.

Bama made Steve Holland’s image even more iconic by using him as the model for Doc Savage on the covers of the Bantam paperback series.

Eva Lynd was also a popular model for many professional pinup photographers in the late-1950s and the 1960s.

In addition, she was — and still is — an actress.

She appeared in episodes of a number of popular variety and drama TV shows in the ‘50s and ‘60s, including THE STEVE ALLEN SHOW, THE GARRY MOORE SHOW, THE THIN MAN, PETER GUNN and THE TEXAN, and in some later shows, like HOGANS HEROES and CAGNEY & LACEY. 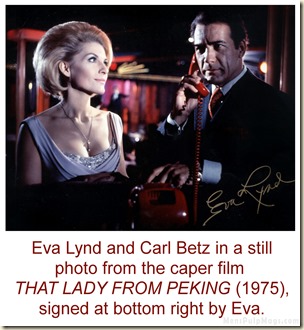 In the latter, also called THAT WOMAN FROM PEKING, she co-starred with Carl Betz, Nancy Kwan and Bobby Rydell under her birth name name Eva von Feilitz.

It’s a fun action romp shot in Australia that you can watch on YouTube.

One of Eva’s most remembered roles was as the “Girl in the Tube.” She’s the alluring seductress who wriggles up out of a tube of Brylcreem in the classic Sixties TV commercial that’s considered one of the best television ads ever made.

Eva’s most recent acting job was in a 2016 TV commercial for Campbell’s Soup.

She appeared in it with her husband, actor Warren Munson.

If you’re a serious Trekkie, you’ll know him as Admiral Paris in the “Persistence of Vision” and “30 Days” episodes of STAR TREK: VOYAGER TV series.

Eva and Warren are the grandparents in the Campbell’s ad, titled “Grandchildren and Chaos.”

After Eva contacted me in 2013, we kept up a regular correspondence by email and phone. As a result, we’ve become long-distance friends (she’s in California, I’m in Florida) and I’ve learned a lot more about her.

Before I became friends with Eva, I knew she was a popular model for pinup or “glamour girl” photos taken by some of the top professional photographers of the 1950s and 1960s, including: Peter Basch, Wil Blanche, Herb Flatow, Leo Fuchs, Emil Herman, Morris Kaplan, Charles Kell, Lester Krauss, Earl Leaf, Ed Lettau and Jerry Yulesman. (By the way, you’ll also find pinup spelled as pin-up or as two words, pin up. Merriam-Webster uses pinup. Wikipedia uses pin-up.)

In the course of talking with her, I learned that she had modeled for even more photographers than I was aware of.

I also learned that photos of her had appeared in dozens of different men’s magazines from the late 1950s to the mid-1960s, as well as in several other types of periodicals. 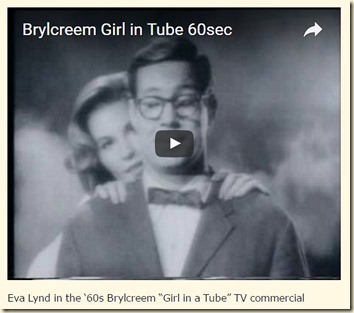 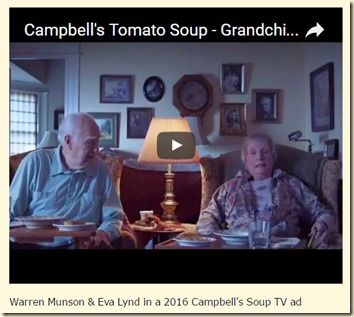 Twelve of my favorite photos of Eva are featured in the 2017 Eva Lynd Pinup Calendar. They come from Eva’s collection or mine. Scans of some of the calendar pages are are shown in this post.

The calendar is officially authorized by Eva and copyrighted by my Subtropic Productions LLC (the company that partners with Wyatt Doyle’s New Texture imprint to publish the Men’s Adventure Library book series).

Almost all men’s adventure magazines included “cheesecake” photo features in between their stories and articles, and many published pinup pics of Eva. 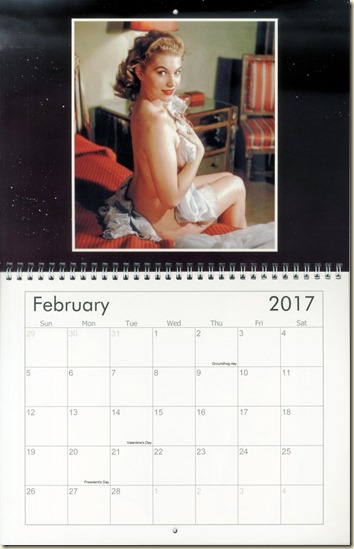 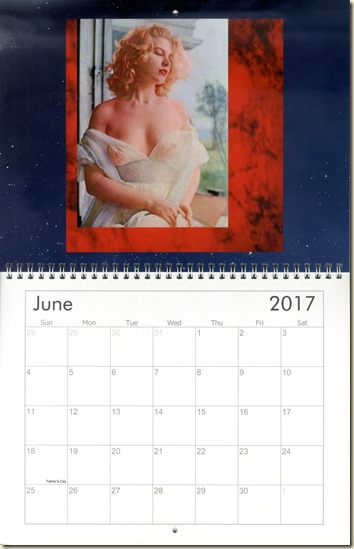 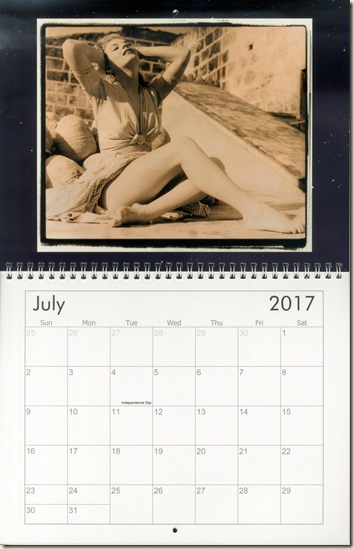 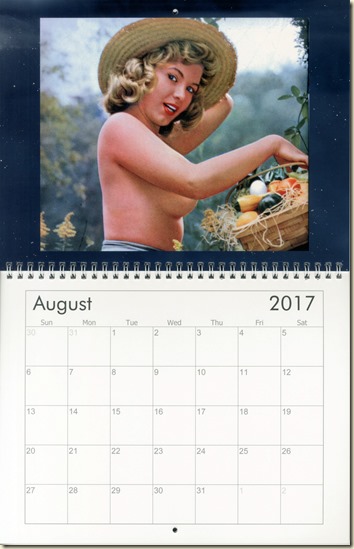 The pinup photographs of beautiful women published in men’s magazines during the years when Eva Lynd was a photo model were comparatively tame.

The models were usually partially clothed, not nude. They were shot by professional photographers who were adept at composition, the use of both natural and artificial lighting, and other photographic skills.

Personally, I prefer the type of glamour girl images shot in the ‘50s and ‘60s to the more explicit photos that became common in men’s magazines in the 1970s. 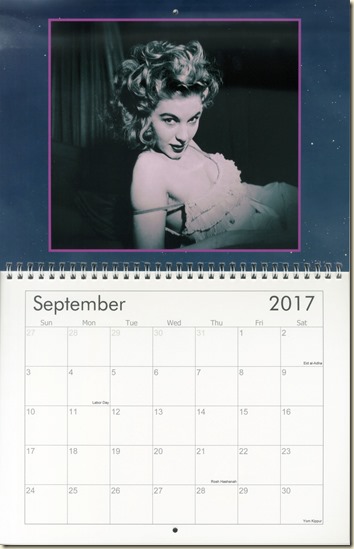 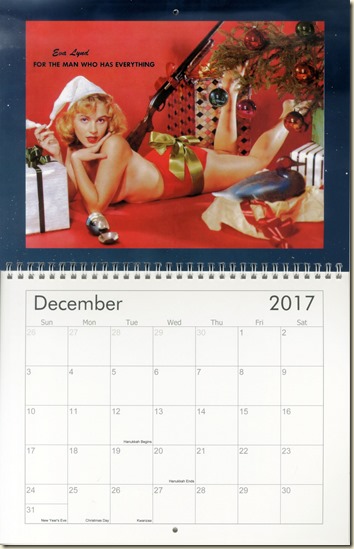 A couple of years ago, I asked Eva if I could create a custom calendar that showcased some of my favorite men’s adventure magazine cover and interior illustrations that she had modeled for, along with some examples of pinup photos that feature her. She said yes. So I did, and sold copies through my CafePress store.

Recently, Eva asked me if I’d be interested in producing a new authorized Eva Lynd calendar. Naturally, I said yes! The result is the Eva Lynd 2017 Pinup Calendar.

You can find them in my eBay store at this link.

I’ll be doing more posts about Eva in the near future. In the meantime, you can click one of the images below click this link to see some of my previous posts about her. 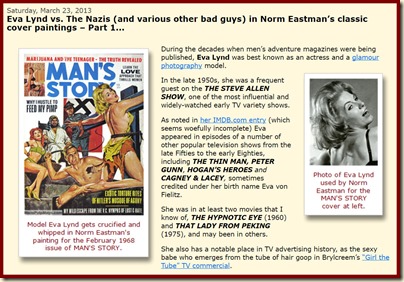 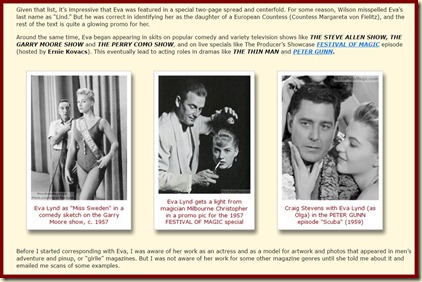