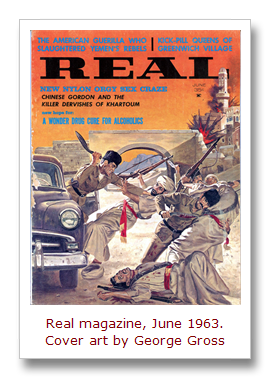 Today, fairly or not, many Americans primarily associate the word “Arab” with terrorists and religious extremism.

Back in the 1950s and 1960s, we had somewhat different stereotypical mental images of Arabs.

In those days, the word tended to conjure up images of sheiks, harems and desert adventure in the Lawrence of Arabia style.

This was reflected in the men’s adventure magazines of the era.

Some of the Arab-related stories and art published in men’s pulp mags were straight ahead Arabian adventure tales or Middle East war stories.

For example, at left is a bloody battle adventure cover from the June 1963 issue of Real magazine.

The cover painting, by artist George Gross, is for a story titled “THE AMERICAN GUERILLA WHO SLAUGHTERED YEMEN’S REBELS.” (The American was a mercenary who was the “hero” of the story.) 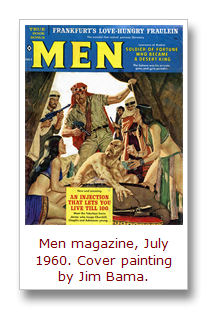 Next, at right, is the cover of the July 1960 issue of Men magazine, which has an Arab adventure action cover by the great pulp and horror artist Jim Bama.

As I mentioned in a previous post, you may notice that it has the flavor of a Doc Savage paperback cover – which is not surprising when you know that Bama also painted most of the cool covers for Bantam’s Doc Savage reprint series.

The editors and readers of men’s pulp magazines of the Fifties and Sixties had a special fondness for stories about endangered damsels in distress and “sex slaves.”

So, naturally, Arab slavers and harems were a perfect fit. And, they were often mixed with other common themes in the men’s “sweat mags”, like bondage and torture or evil Nazis.

As a group, I call these kinds of covers and stories the “Arab peril” subgenre.

Here are two Arab peril examples in the harem and DID mode, from Adventure magazine and Man’s Illustrated… 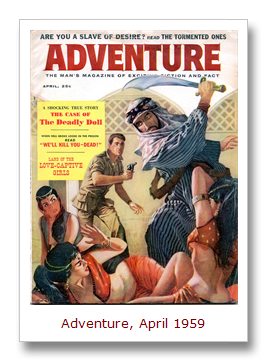 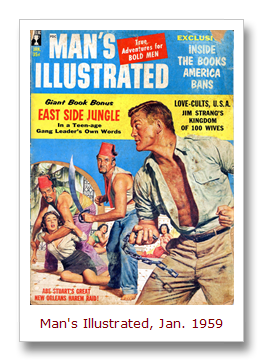 Even more creatively gonzo are the Arab peril covers that managed to mix together Arab slavery, bondage, torture and evil Nazis – like these examples from World of Men and Man’s Story magazine… 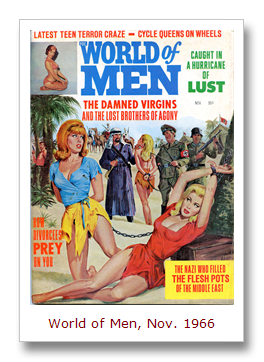 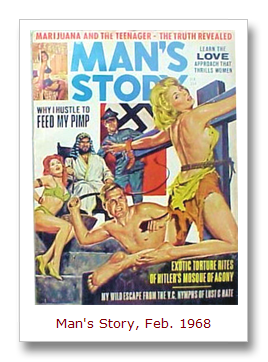 Of course, these examples are politically incorrect, sexist and racist.

But somehow their images seem less scary than things we tend to associate with “Arabs” today – like terrorist attacks and suicide bombers.