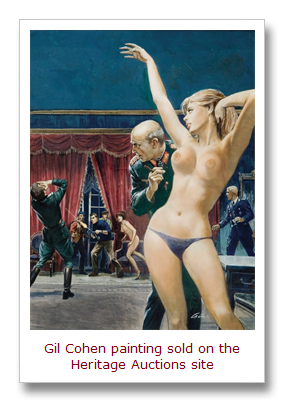 A while after I posted my three-part interview with former men’s adventure magazine artist Gil Cohen, I ran across an online photo of one of his original paintings that made me do a double take.

The painting, which was sold on the Heritage Auction Galleries website, was very familiar to me. 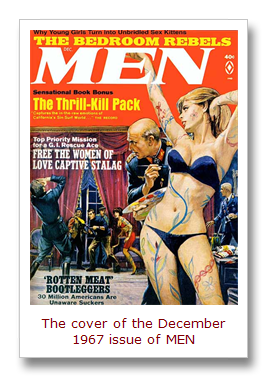 It was used for the cover of the December 1967 issue of Men magazine, which happens to be one of my all-time favorites. It goes with the story inside titled “FREE THE WOMEN OF LOVE CAPTIVE STALAG,” written by Charles Kranepool.

But the painting I saw on the Heritage Auction site was noticeably different than the one used on that campy, classic cover.

The scene depicted on the cover of Men features a Nazi officer and a beautiful babe who looks a lot like Goldie Hawn did on the Laugh-In TV series.

Unlike most of the infamous Nazi bondage and torture covers used on men’s “sweat mags,” this Nazi is not subjecting the woman to some fiendish torture — he’s holding a paint brush and palette and subjecting her to a fiendish session of body painting.

However, in the painting sold on the Heritage Auction site, there’s no body paint on the babe and she’s topless. Instead of holding a paint brush, the Nazi officer is holding a cigar. And, the palette is gone.

In the scene on the cover of Men, there’s another body-painted babe in the background, next to the hero who’s coming into the room with machine gun blazing. In the painting on the Heritage Auction site, that background babe is entirely nude. 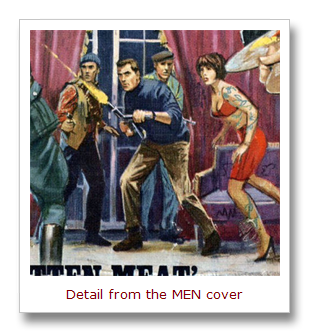 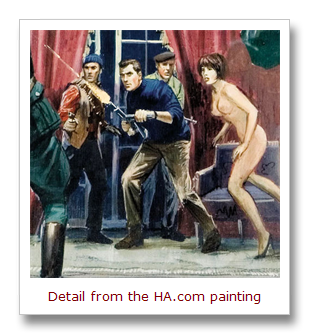 Men’s adventure magazines in the 1950s and 1960s showed a lot of scantily-clad women on their covers. But they didn’t feature nudity until they switched from using cover paintings to cover photos in their waning years, during the 1970s.

Starting in the late 1960s, men’s adventure mags did have interior illustrations that showed women topless, with their nipples showing. (Before that, no nips were allowed in illustrations or photos unless the women were “natives” and thus acceptable under the “National Geographic rule.”) 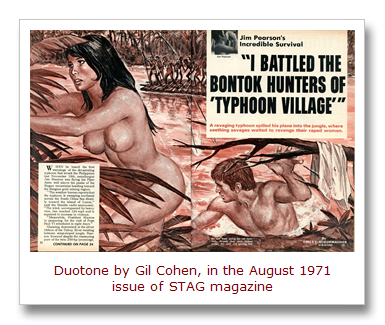 Now, I knew Gil Cohen had painted some great interior illos with topless babes, like the lush duotone he did for the story “I BATTLED THE BONTOK HUNTERS OF TYPHOON VILLAGE,” published in the August 1971 issue of Stag.

The original painting for that one, shown in Part 1 of my interview with Gil, is now in Rich Oberg’s amazing collection of men’s adventure magazine art.

So, I started wondering…

Was it possible that the painting shown on the Heritage Auction site was an earlier version of the cover painting used on the cover of the December 1967 issue of Men?

Was the nudie version perhaps originally intended as an illo for the interior, where nude paintings were “allowed” in 1967?

Or, did Gil Cohen alter the painting for some reason after it was used for the cover of Men? 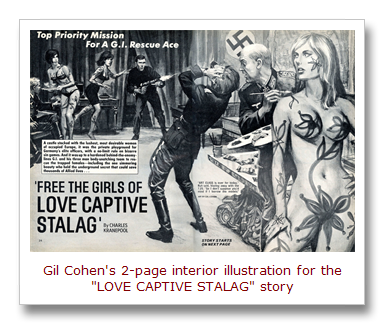 The first possibility seemed unlikely, since Cohen also created a separate two-page interior illustration that was printed with the “LOVE CAPTIVE STALAG” story. (It was also illustrated with an odd set of photos that look like they came from movie stills and a stock photo house.)

It also seemed unlikely to me that Cohen would have altered the painting after it was used for the cover of Men.

In my interview with him, Gil told me he stored most of his original artwork at home until the mid-1970s.

Then he impulsively sold most of it at incredibly low prices in a bin at his brother’s hardware store in Philadelphia, simply because he was tired of storing it and had moved on to another stage of his long career. (That bin is where a lot of the original Gil Cohen paintings now sold on the Heritage Auction site and eBay come from.)

When I took a closer look at the nudie version of the painting, I saw another clue that indicated it probably wasn’t Cohen who did the altering.

I could see a faint, leftover image of the black bra on the chest of the woman in the foreground. I highly doubted that such sloppy work would be done by a meticulous artist like Cohen.

So, I decided to find out if Gil could clear up the mystery. I emailed him the photo of the altered painting and asked if he had any idea how and when it had been changed. 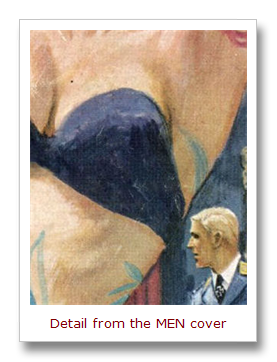 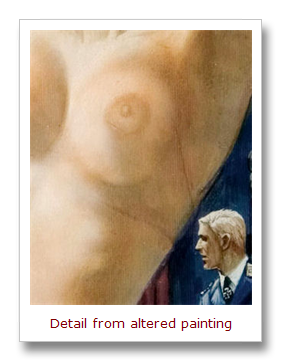 Gil replied: “After all these many years I cannot actually recall what happened nor when. The only thing that I can say for certain is that I did a cover illustration showing the girls with body paint and the Nazi holding an artist’s pallet and paint brush. I don’t remember painting bare breasts.” 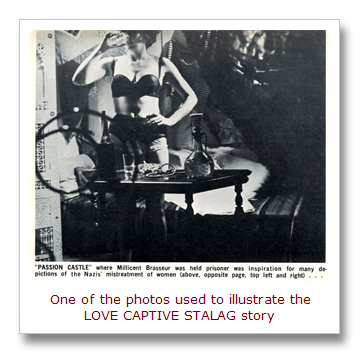 That means somebody other than Cohen painted over the original artwork and turned it into a “nude painting,” thinking it would be more salable. (The bastard!)

By the way, in the “LOVE CAPTIVE STALAG” story, a Nazi officer really does practice body painting on the women. (The bastard!)

I should also note that the story is actually worth reading. It’s a fast-paced, fairly bloody, credibility-stretching yarn with some intriguing characters — including three American Indian GIs who kill Nazis the old-fashioned way, with arrows and hatchets.

Not quite as over-the-top as Quentin Tarantino’s Inglourious Basterds. But I think Quentin would like it.

Men was published from 1952 to 1977. It was one of the Diamond/Atlas group of magazines published by Martin Goodman’s Magazine Management company or it’s subs.

In it’s heyday, from 1952 to 1968 (before it started changing from a men’s adventure magazine into more of a Hustler-style stroke magazine) Men was published by the Mag Management sub Zenith Publishing Corp.

Coming soon: a post about the Holy Grail of man vs. nature cover paintings and stories, “WEASELS RIPPED MY FLESH.”