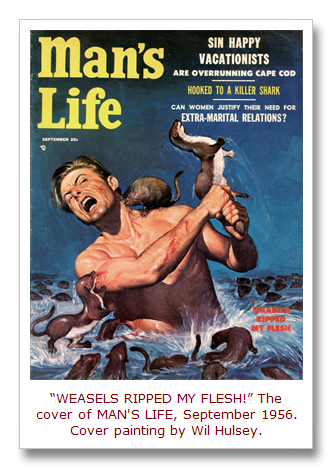 My very first post on this blog, back in August of 2009, was about the magazine cover that sparked my initial fascination with men’s adventure magazines: the cover of the September 1956 issue of Man’s Life, Vol. 4, No. 5.

That’s the cover that features the famous “WEASELS RIPPED MY FLESH” headline and painting.

Some 6,000 or so issues of men’s adventure magazines were published between 1950 and the early 1970s, before the genre faded away.

The “WEASELS RIPPED MY FLESH” issue of Man’s Life is undoubtedly the most famous, thanks to the late, great, gonzo musician Frank Zappa.

Zappa had a copy of the issue and the absurdity of flesh-ripping weasels appealed to his unconventional sense of humor.

In 1970 he decided to use WEASELS RIPPED MY FLESH as the title of the latest album by his band, The Mothers of Invention. (He also used it for the title of an instrumental piece included on that LP.)

However, Zappa didn’t use the Man’s Life cover painting for the cover art on his album. Instead, as recounted on many websites, he showed a copy of the issue to a hip young illustration artist who called himself Neon Park. (His birth name was Martin Muller). According to legend, Zappa said to Park: “What can you do that’s worse than this?”

I assume that by “worse” Zappa meant something even more over-the-top than the OTT scene on the cover of the September 1956 issue of Man’s Life, which shows a horde of vicious, apparently aquatic weasels attacking a screaming, bare-chested, bleeding man who’s waist deep in water.

Neon Park came up with his own bizarre image for the album cover. Inspired by a Schick Razor ad he saw in the October 3, 1953 issue of the Saturday Evening Post, he created a cartoony painting of a nerd in a suit and tie who is shaving himself with what appears to be an, er, electric weasel razor.

The weasel’s teeth are ripping a bloody gouge in the guy’s cheek. But he’s smiling blissfully. A word balloon next to his head says “RZZZZZ!” Another shows the name of the album, which became far better known than the music on the album. 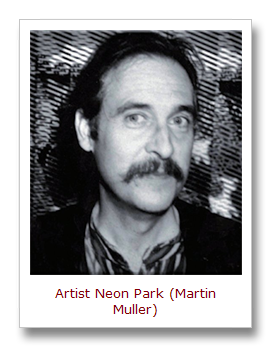 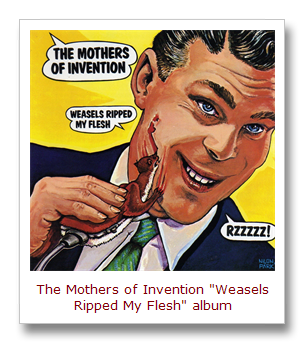 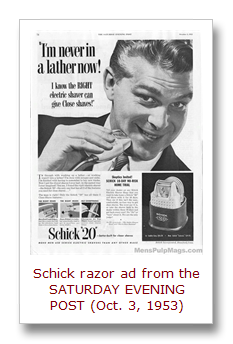 The album’s name and cover turned out to be very memorable to Frank Zappa fans. They tracked down the September 1956 issue of Man’s Life that inspired Zappa’s title and Park’s cover painting. At some point, someone familiar with men’s adventure magazines recognized that the cover painting on Man’s Life was done by artist Wil Hulsey.

Whoever first noted that Hulsey did the painting had to know something about men’s adventure mags because there’s no artist signature shown on the cover and the content page doesn’t mention Hulsey. It says: “Cover by AMERICAN ART AGENCY.”

However, to aficionados of vintage men’s pulp magazines, Hulsey’s work is very recognizable. His style is smooth and realistic, even though the scenes he depicted are often fantastic. His colors are especially lush.

In most Hulsey cover paintings, the focus is on a person or people the foreground. Unlike some men’s pulp mag artists, such as Mort Kunstler and Basil Gogos, Hulsey didn’t do panoramic images, like big battles scenes.

Many of Hulsey’s cover paintings are incredible, often bloody animal attack covers, in the “WEASELS RIPPED MY FLESH” vein. I’ve featured some of my other favorites in that subgenre in previous posts here, such as his classic killer turtles cover, “CHEWED TO BITS BY GIANT TURTLES” (Man’s Life, May 1957) and his “LIZARDS FROM HELL” cover (True Men Stories, February 1957). 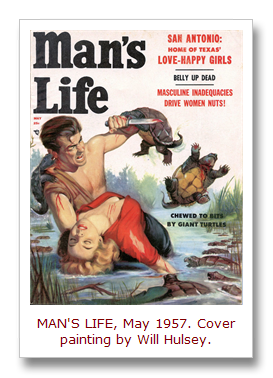 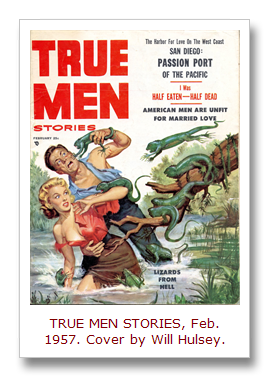 Hulsey did at least 20 great killer creature covers that I’m aware of. He was a master at it. But he also did covers in several other categories, including exotic adventure scenes, sexy Civil War scenes, modern battle scenes and Westerns. 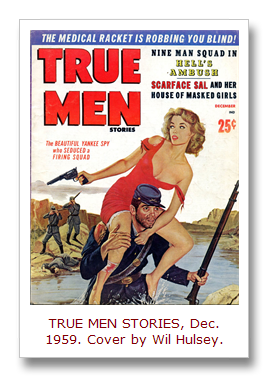 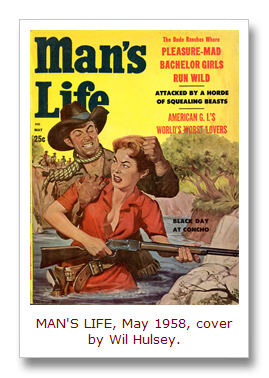 Most of Hulsey’s cover paintings appeared on issues of Man’s Life and True Men Stories from the mid-1950s up until about 1962.

Many of them include what collectors call “Good Girl Art,” or GGA for short — images of beautiful, well-endowed, scantily-clad women. (The term is applied to those images not only in men’s magazines, but also in comics, cartoons and vintage paperbacks.)

A lot of Hulsey’s covers show damsels in distress being attacked or menaced by evil critters or evil men. However, unlike several other famous men’s adventure mag artists, such as Norm Eastman, Norman Saunders and Basil Gogos, Hulsey didn’t do evil Nazi bondage and torture covers.

Regardless of the scene, many of the women in Hulsey’s covers are wearing (barely) a blazing red blouse or dress. Less frequently, the color is bright yellow. Using these hot colors on busty babes enhanced the eye-grab potential of the magazines’ covers and, along with ample cleavage, helped ensure that an issue would stick out on newsstands — in more ways than one. 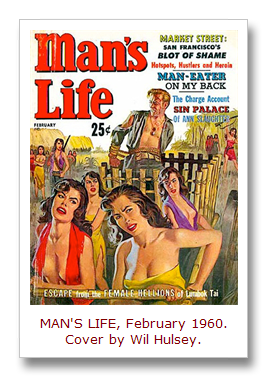 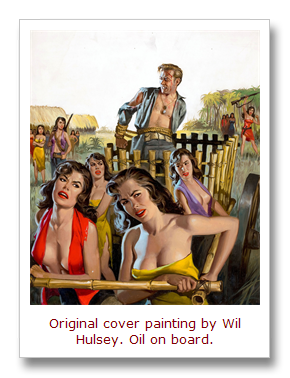 I love Wil Hulsey’s work and rank him among the best artists who worked in the men’s adventure magazine genre. A lot of other collectors agree. Magazines with Hulsey covers are some of the most sought after. The rare examples of his original paintings that show up on sites like the Heritage Auction Galleries sell for thousands of dollars. 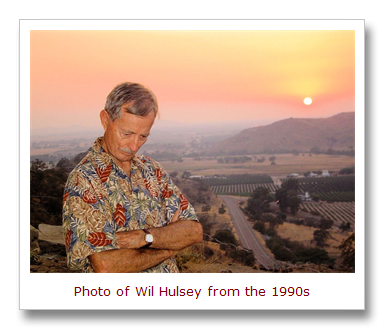 So, it’s has always been a bit surprising to me that information about Hulsey is very scarce. There’s no basic bio for him online or in any books I’ve seen. And, sources that do mention him often incorrectly give his first name as “Will.” I referred to him as “Will Hulsey” myself until late last year, when I got an email from his granddaughter.

She’d seen a post I did mentioning her grandfather and wanted me to know that his first name is Wilbur, so he’s a “Wil” — not a “Will” — for short.

In her email, she told me: “It’s a common misconception that his name is William, but it is actually Wilbur. He was born in Kansas but moved to New York where he met my grandmother. From there they moved to the San Fernando area. They still live there in the same house that my father and two aunts grew up in. Wil is still alive and is 84. He will be 85 in March.”

That was pretty exciting news to me. Finally, I had some biographical facts about Hulsey and confirmation that he was still alive.

It inspired me to take a shot at getting him to do an interview for this blog. To my knowledge, no one has done an interview with Hulsey for any book, magazine or website. It would be a real coup if I could snag one.

So, a while ago I got up the nerve to call him on the phone and asked him if he’d be willing to do an interview with me about his work for the men’s adventure magazines. 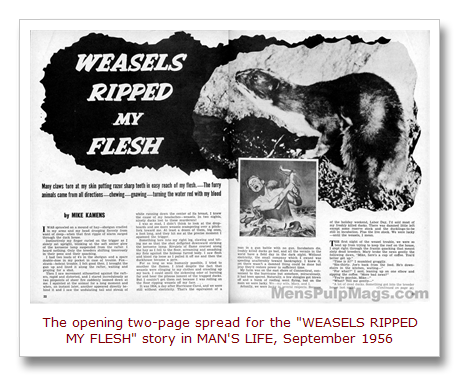 So, a while ago I got up the nerve to call him on the phone and asked him if he’d be willing to do an interview with me about his work for the men’s adventure magazines.

There was a long moment of dead air.

Then Wil said: “Well, you know, that was a long time ago and I’ve been happily retired for many years. I’ll have to think about it. Call me back in a few days.”

When I called him back a few days later and repeated my request for an interview, Wil said: “Well, I don’t know. That was many years ago. I’ll think about it. Call me back in a few days.”

I did. He didn’t want to talk then either. At that point it seemed pretty clear to me that not much is known about Wil Hulsey because he prefers it that way.

I gave up on trying to talk to Wil and he passed away passed away in 2015 at the age of 89. But I’ve noted more of what I’ve learned about Hulsey and show more of his artwork in various posts on this blog.

If you’ve ever been curious to read the story that inspired his famed flesh-ripping weasels painting and don’t want to spend hundreds of dollars to buy a copy of the rare MAN’S LIFE issue it originally appeared in (if you can even find one), there is a way.

Wyatt Doyle and I reprinted in our book WEASELS RIPPED MY FLESH!. That book includes the famed killer weasels yarn and 21 other classic men’s pulp adventure magazine stories. Some are by well-known writers who once sold stories to MAMs, such as Lawrence Block, Harlan Ellison, Robert Silverberg, and Bruce Jay Friedman.

It was the first book in our Men’s Adventure Library series and, although there are some overpriced copies on Amazon, you can get one for a reasonable price by buying directly from me via my eBay listings or the online bookstore linked to this  blog.