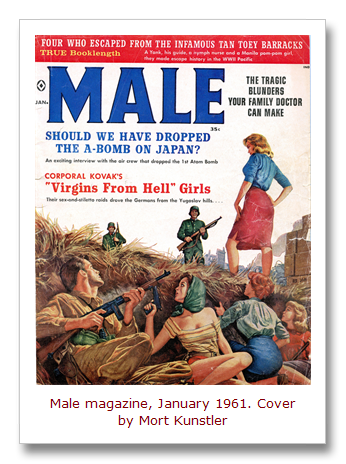 Recently, I bought a copy of the January 1961 issue of Male magazine online, largely because it had a cover painting by Mort Kunstler, one of the greatest and most famous artists who provided artwork for men’s adventure magazines.

Kunstler’s cover painting is for the story “Corporal Kovak’s ‘Virgins from Hell’ Girls.” An enticing explanatory subtitle under the cover headline adds: “Their sex-and-stiletto raids drove the Germans from the Yugoslav hills.”

It’s a clearly untrue “true story” about an American G.I. on a secret mission behind German lines in Yugoslavia during World War II. The Yank hooks up with a group of hot, Nazi-hating female freedom fighters who enjoy killing Krauts. (Quentin Tarantino’s Inglourious Basterds would have loved “The Virgins from Hell.” Corporal Kovak sure did.)

When I read this new addition to my men’s pulp mag collection, I discovered that it’s even more of a treasure than I knew when I bought it.

For example, the contents page notes that the Editorial Director of Male when this issue was published was Bruce Jay Friedman.

As I noted here in another recent post, Friedman wrote a book that has very interesting and funny anecdotes about his years as a men’s adventure mag editor, titled Even the Rhinos Were Nymphos

In addition to the cover painting, Mort Kunstler provided a luscious blue-and-black duotone illustration for another WWII story inside. This one is about a Yank soldier who meets up with “a never-say-no British nymph and a beautiful Manila pom-pom girl” in the Japanese-occupied Philippines. 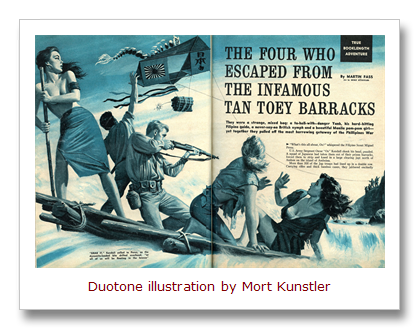 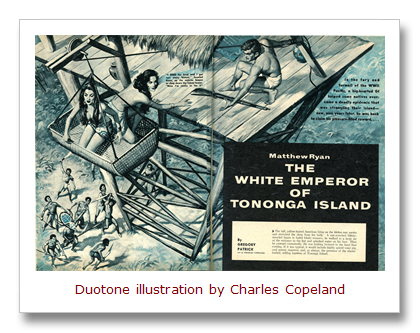 And, there’s the rip-snorting illustration shown below, by Jim Bama, who is probably most famous for the cover paintings he did for the Doc Savage paperbacks published by Bantam. 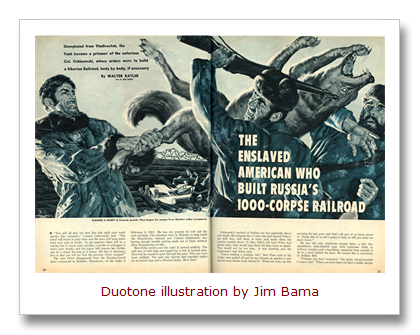 There are plenty of other great things in this issue, but that’s enough for one blog post. I’ll get to some of those other things in a future post.