Artist Basil Gogos has been called “a bizarro-world Norman Rockwell.” He’s best known for the legendary monster paintings he did for horror magazines like Famous Monsters of Filmland, created by monster and sci-fi superfan, Forrest Ackerman (1916-2008) and Warren Publishing. 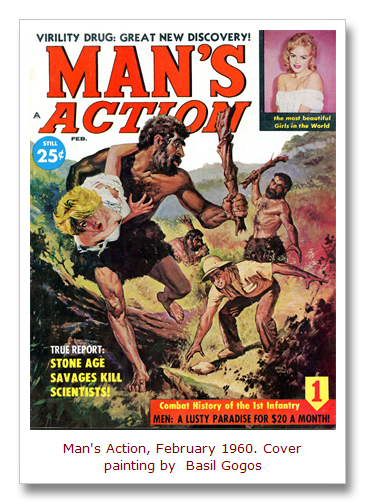 In the 1960s, Gogos also created great cover art for men’s adventure magazines, like the example at left from the February 1960 issue of Man’s Action magazine.

Gogos is of Greek descent, but was born in Egypt. (His official bios don’t give a birth date, though I’d guess he’s in his 80s.)

After his family immigrated to the United States, Gogos studied at various art schools and started his professional career as an artist and illustrator in the late ‛50s.

His club-wielding, babe-stealing cavemen scene on my prized copy of Man’s Action is one of the men’s pulp mag covers he did that looks like poster art for a Grade B horror movie.

The title of the cover story it goes with is “TRUE REPORT: STONE AGE SAVAGES KILL SCIENTISTS!”

It’s about an adventuresome guy and gal who tag along on an African trip with an anthropologist who’s searching for a lost race of proto-humans.

They find the lost race. And, they turn out to be extremely hostile 600-pound cannibalistic ape-men.

It’s a totally over-the-top story that could only be a “true report” if it took place in an alternate universe. (Like the universe of men’s adventure magazines.)

You can read this bloody, ripping yarn yourself by clicking on this link and downloading it as a PDF.

I’ll come back to other wild stuff in this classic issue of Man’s Action and to the art of Basil Gogos in future posts.

In the meantime, in case you had a deprived childhood and never saw any of Basil’s incredible monster paintings, below are some examples for your viewing pleasure. If you like them, be sure to check out the gorgeously illustrated book Famous Monster Movie Art of Basil Gogos. 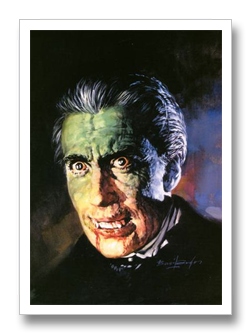 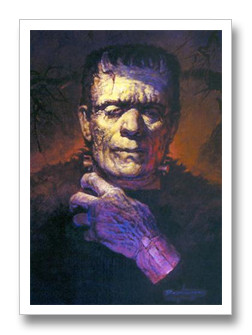 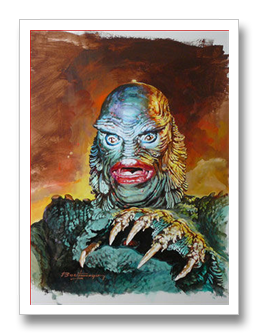 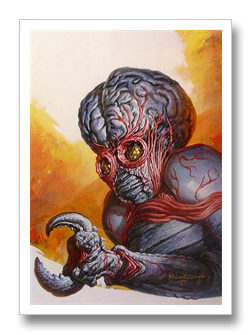