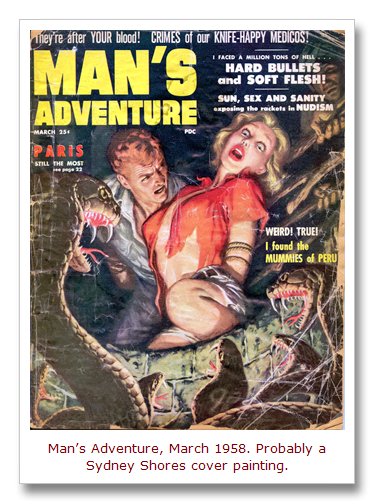 Remember that snake scene in the original Indiana Jones movie, Raiders of the Lost Ark (1981)?

Indiana (Harrison Ford) looks down at the slithering mass in the “Well of Souls” and says: “Snakes! Why’d it have to be snakes?”

His native sidekick Sallah (John Rhys-Davies) has a great reply.

(Watch it again on YouTube if you haven’t seen it lately.)

Of course, that’s exactly why snakes were a popular subject in men’s adventure magazines. They’re always frakkin’ scary and dangerous! At least, in the men’s postwar pulp zone.

I have a number mags in my collection with snake cover paintings and stories that could provide the basis for some great Indiana Jones sequels.

The March 1958 issue of Man’s Adventure at left is one I particularly like, even though it’s a bit tattered.

It has killer creatures from the “Weasels Ripped My Flesh” genre of art. (With the added plus of a similar headline on the cover: “HARD BULLETS FOR SOFT FLESH!”)

It also has a studly, Dudley Do-Right hero. And, of course, there’s a gorgeous babe in peril with only a few shreds of clothing left on her curvy body. (Though her lipstick still looks perfect!)

In addition, it has some snakelicious interior artwork by the renowned comics and magazine artist Syd Shores (1913-1973), a.k.a. Sydney or Sid Shores. He probably painted the cover, too, but it’s uncredited in the magazine. 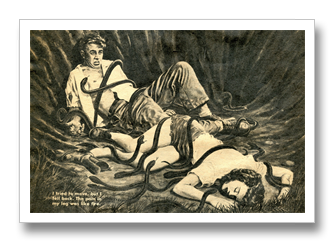 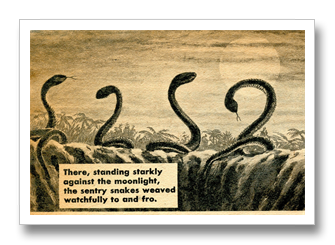 Shores may be best known for his work on the “Golden Age” Captain America comics in the 1940s. But he continued to do much-admired penciling and inking for Marvel Comics through the 1960s, as well as many illustrations for men’s adventure mags.

The title of the story that goes with Shores’ artwork for the March 1958 issue of Man’s Adventure is “Crawling Death.”

It’s an exotic jungle adventure tale set in New Guinea, with a corpse and Ophidian-filled pit.

You can read this gonzo story for yourself in PDF format by clicking this link.