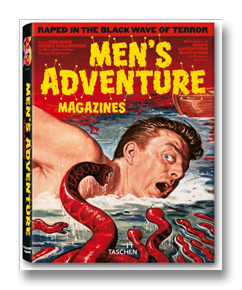 Recently, I had the good fortune of talking with Rich Oberg, who is literally the world’s greatest collector of men’s adventure magazines and the original artwork created for them.

Examples from the Rich Oberg Collection are what you see in the richly illustrated book Men’s Adventure Magazines, which Rich helped create for the Taschen publishing company, with writers Max Allan Collins and George Hagenauer.

Rich told me he started down the road to putting together the world’s biggest collection of men’s adventure magazines and art after making a spur of the moment decision to attend a Pulpcon at Bowling Green in 1994. (Pulpcon is a popular convention for fans of pre-WWII pulp magazines.)

“I’m 55 and missed most of the men’s adventure magazines when I was a kid.” Rich said. “But I remember being fascinated with some of their wild covers as a teenager when I saw them on the store shelves. I also remember I found one my dad had in our attic, Man’s Book January 1966, which I quietly confiscated hoping he wouldn’t notice. He didn’t.”

Many years after “collecting” that first magazine, Rich recalled his fascination with men’s adventure magazines and thought it might be fun to collect them. 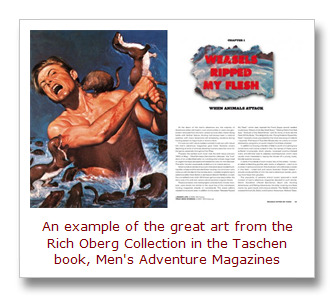 “In the 1980s, I found a guy who sold mostly adult photo mags from the ‘60s who also had some nice men’s adventure magazines,” Rich said. “I bought some from him and other sellers and had a fledgling collection, and then the pipeline stopped. This was in the days before eBay, and I just couldn’t find many high quality copies.”

[the premier collector of prewar pulp art] had an exhibit of original pulp art from his collection there. I heard the stories of how Lesser was once considered a ‘nut’ for investing in pulp artwork. Of course, later, when examples of original prewar pulp art were going for tens of thousands of dollars each, no one was laughing anymore.”

“Then, I thought, what about the men’s adventure magazines? I like the postwar men’s adventure art even better, stylistically and as examples of American realism art. But where is it? And, does it even exist? After a lot of phone calls and trips to see dealers and artists, I found out it did exist. I went nuts! I decided I wanted to be the ‘Bob Lesser of men’s adventure art’ and guess by most accounts I’ve succeeded.” 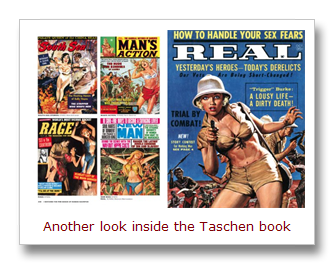 The Taschen book that the Rich Oberg’s collection made possible — now in its 25th edition — is largely responsible for the recent interest in the these great vintage magazines and the art created for them, along with Adam Parfrey’s book It’s a Man’s World: Men’s Adventure Magazines, The Postwar Pulps.

Rich and I both feel that “men’s sweats” should probably only be used to refer to the subgenre that focuses on bondage and torture artwork and stories (if at all).

The term “men’s adventure magazines” is more comprehensive and includes other common subgenres, like the artwork and stories that focus on war, exotic adventure and animal attacks.

I also use the term “men’s pulp magazines” interchangeably with “men’s adventure magazines.” And, the Parfrey book uses the term “men’s postwar pulps.” (There’s a discussion thread about this terminology debate in the new Men’s Adventure Magazines Facebook Group associated with this blog.)

In future posts here, I’ll pass along some more interesting facts and great anecdotes I’ve heard from Rich Oberg, the Dean of the men’s adventure magazine realm. Thanks, Rich!