There’s a debate going on among members of the new Facebook Group associated with this blog about the terminology used for the magazine genre featured here. 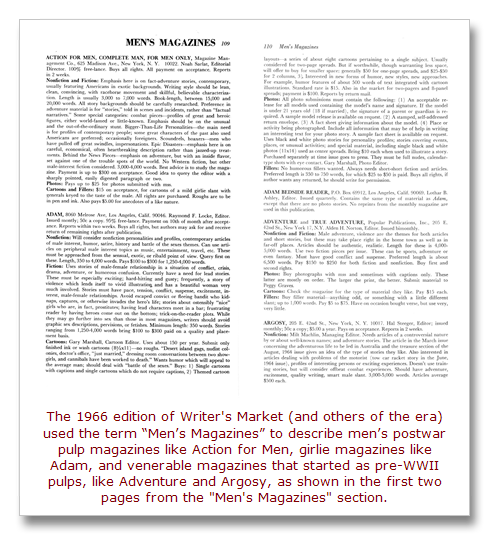 Back in the 1950s and 1960s, these magazines were categorized simply as “Men’s Magazines” in the annual Writer’s Market books published in those decades.

The men’s magazines printed on pulp paper, which are the main subject of this blog, had painted covers (printed on slick paper) and were somewhat similar to or, in some cases, directly descended from some of the pre-WWII pulp magazines.

The men’s “slicks” of the Fifties and Sixties, also called “bachelor” or “girlie” magazines, typically had photos of pretty girls on the covers rather than painted scenes. And, unlike most of their pulpy relatives, which typically had fairly mild “cheesecake” photos, the girlie magazines featured nude photos (though sans any visible “dark triangles” until around 1970).

Some vintage men’s magazines were printed partially on pulp and partially on slick paper and some featured both painted illustrations and photos on their covers. In addition, in the late 1960s and early 1970s, some men’s magazines changed from a pulp adventure style format to a slicker girlie mag format – making it even harder to pigeonhole them with a specific term.

Starting in the 1980s or thereabouts, magazine collectors began using the terms “men’s sweats” and “sweat magazines” to describe the vintage men’s magazines printed on pulp paper. But today, those terms seem to be used primarily by people who don’t really like the genre much, or by people who hear those names and simply think they are the “correct” terminology.

However, as noted by Robert F. Dorr, an esteemed military historian who wrote hundreds of articles for men’s magazines from the late 1950s to the mid-1970s, neither of those “sweat” terms was in common use at that time. In the discussion thread on the Facebook Group I mentioned, Bob said: “I never heard the word ‘sweats’ used to describe any of these magazines during the years they were in existence.”

Bob prefers the term “men’s adventure magazines.” And, I agree.

For example, consider the cover of Man’s Magazine below, with the painting by Mel Crair — done for Bob’s own World War II story “Yank Ace Who Saved the Anzio Invasion.” Compare it to the Man’s Book magazine cover from the same year, with the Nazi bondage and torture scene painted by John Duillo. Yes, both covers have World War II scenes. But, to me, only one fits the image associated with the somewhat derogatory term “men’s sweats.” 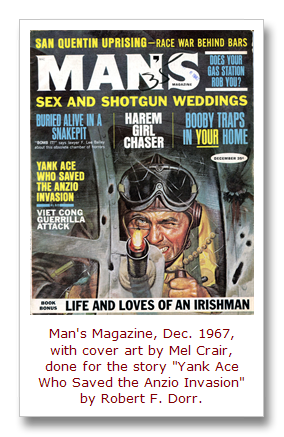 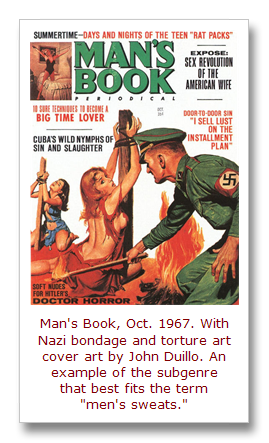 Rich Oberg — the biggest and most knowledgeable collector of the magazines and original art from the genre — has also weighed in on the terminology issue in the Facebook Group discussion thread.

“The worst part about calling them ‘sweats’ is it leaves off the vast majority of titles (many running well over a decade) clearly falling within this genre,” he said. Richs dislikes the term “sweats” and feels that, if used at all, it should only be used to describe “the most extremely lurid subset” of the genre, like those that focused on sex-laden bondage and torture scenes. As Rich points out, those are really a subgenre and not representative of the broad range of magazines in the genre, many of which primarily featured war scenes, animal attacks, and historic and exotic adventure scenes on their covers.

The great book Rich helped create, which features covers and original artwork from his awe-inspiring collection, helped popularize the term “men’s adventure magazines” as the most commonly heard name for the genre today. The full title of that book is Men’s Adventure Magazines in Postwar America. 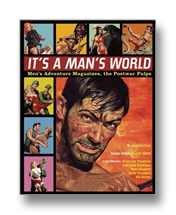 The other excellent book about the genre, Adam Parfrey’s It’s a Man’s World, is subtitled Men’s Adventure Magazines, The Postwar Pulps.

Mike Harwood, another aficionado of the genre who joined in the terminology discussion on the Facebook Group, has countered: “I personally prefer the term ‘sweat magazine’ which, to me, has a certain poetry to it because it makes me think of the sweat that appears when one is either attacked by killer turtles or enticed by nympho teenage belly dancers…or perhaps even the sweat that appeared on the brow of people approaching the counter with a magazine that they shouldn’t have been buying.”

That’s definitely a well-written and smile-inducing point of view. And, I’d bet that most people who enjoy vintage men’s adventure magazines have a fondness for those wild, campy “sweat magazines” — even if they use that term for a subgenre rather the genre as a whole. I certainly do.