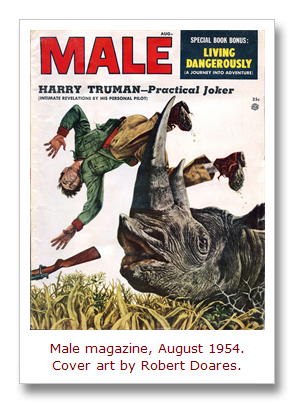 When I bought the August 1954 issue of Male magazine shown at left, with the superb cover painting of a rhino attack by artist Robert G. Doares, it reminded me of the book Even the Rhinos Were Nymphos, by a former editor of Male magazine, Bruce Jay Friedman.

Today, Friedman is known as a critically acclaimed novelist, playwright and screenwriter. He’s the author of bestselling novels, such as Stern and A Mother’s Kisses, popular plays such as Scuba Duba and Steambath, and screenplays for hit movies like Splash and Stir Crazy.

Friedman’s book Even the Rhinos Were Nymphos is a collection of his non-fiction articles. The title story is a witty account of his pre-fame years as a men’s magazine editor in the 1950s and 1960s.

Around 1955, Friedman was hired as an editor of Swank by the legendary men’s magazine and early Marvel comics publisher, Martin Goodman, owner of the Magazine Management company. 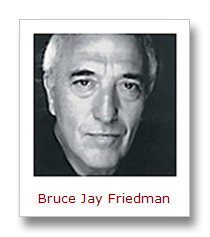 After a short stint at Swank, Friedman was moved over to edit the men’s adventure magazine Male, one of the most popular titles published as part of Magazine Management’s Atlas/Diamond Group of men’s magazines.

At the time, the circulation of Male exceeded a million copies per month. It had talented staff writers like Mario Puzo (who later gained fame as the author of The Godfather) and used painted cover and interior art by some of the best illustrators of the day.

A staple of Male in the 1950s was what Friedman calls “animal nibblers” — the “stories about people who had been nibbled half to death by ferocious little animals.” (They’re what I call the “Weasels Ripped My Flesh” subgenre.)

The formula used by Male was similar to that of other Atlas/Diamond Group men’s adventure magazines, like Action for Men, For Men Only, Men, Man’s World, Ken for Men and Stag. 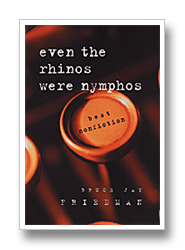 In his Nymphos book, Friedman says of these magazines:

“Although Magazine Management had the reputation of being somewhat of a ‘sin pit,’ the Goodman magazines, at root, were outrageously pristine, almost conventlike. Never before has there been a case in which the name triumphed so resoundingly over the game. Although ‘nymphos’ abounded in the pages of Male and Stag (even the rhinos were nymphos) and girls were mentioned frequently who would ‘do anything and everything,’ one would have to look elsewhere to discover exactly what that anything and everything was.’”

The August 1954 issue of Male has an “animal nibbler” story that is fishy in more ways than one. It’s about a diver’s fight with a shark titled “GIVE ME BACK MY HAND.” The shark is a nurse shark, a generally docile bottom dweller that only bites if harassed – as the one in the story is by the diver.

There’s also a classic “Sintown” sex expose – “NEWARK: poor man’s Paris.” (Little did you know, eh?) Another “true” story in this issue, about a hotel security “detective”, has the snigger-inducing title “I am a HOUSE DICK.”

There are two stories of special note from an pulp art and pulp fiction perspective. One, titled “Limpo’s in Town,” is by James Kalshoven, a top-tier magazine writer published by many other popular magazines of the era, such as The Saturday Evening Post. The Kalshoven story features a nice, noir-style painted illustration credited to Bob Schultz. (I think the artist may actually be Bob Schulz, a talented artist and prolific whose work appears on and in many men’s adventure magazines.) 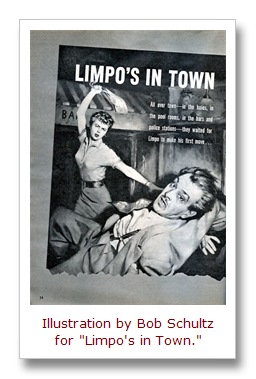 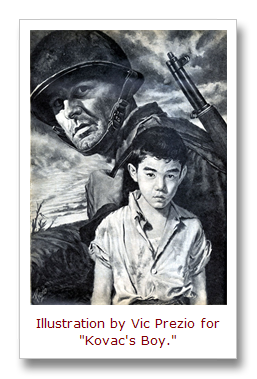 The other notable fiction story is “Kovac’s Boy,” a touching Korean War tale by C.A. Rogers, illustrated by Vic Prezio.

You can read more about connections between the horror genre and men’s pulp magazines in my post for the Boris Karloff Blogathon, sponsored by the terrific Frankensteinia blog.)

And, here are some more books by Bruce Jay Friedman…