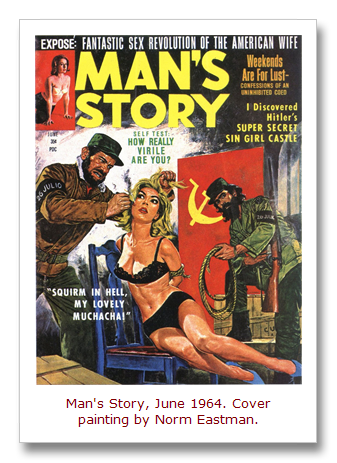 The post-WWII men’s adventure magazines had a love-turned-to-hate relationship with Cuba.

In the 1950s, when Cuba was run by dictator Fulgencio Batista, with a little help from his friends in the American Mob and American government, the men’s pulp mags published goggle-eyed travel pieces and sexposé style articles touting Havana’s glitzy casinos, sex shows, brothels and women.

There was even an occasional sympathetic news item or story about the Cuban rebels up in the mountains.

That all changed with the end of the Cuban Revolution, which put Fidel Castro in the dictator’s seat in 1959.

Castro turned Cuba into a Communist thorn in America’s side, a Cold War enemy just 90 miles away from Key West.

In the black and white worldview of men’s pulp magazines, that put Fidel and his Commie pinko comrades in the same category as the Nazis, Japs, Gooks and Russkies.

So, in the 1960s, bearded Fidelistas showed up on covers as evil, torturing fiends, in scenes similar to those in the genre’s iconic Nazi bondage and torture covers. 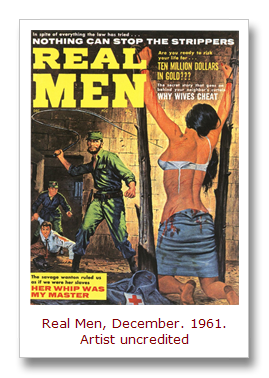 As explained by Max Alan Collins in the Taschen book, Men’s Adventure Magazines In Postwar America:

Men’s adventure magazines loved to target Fidel Castro’s Cuba, bombarding our isolated neighbor through extreme covers and stories. Ironically enough, prior to Castro’s victory in 1959, many ran stories about the valiant revolutionaries fighting to overthrow Fulgencio Batista y Zaldivar and his oppressive regime. Once Castro won, however, the magazines took offense at his actions – not so much his summary execution of the worst of Batista’s torturers, but his decision to go socialist and close many mob-owned Cuban brothels.

This political turnaround was not unique to men’s adventure magazines. America not only gave shelter to Batista Cubans, but began training them to retake the country. Castro had also tossed out American organized crime, which controlled most vice and the casinos in Cuba. A reader did not need to go to the sweat magazines to find anti-Castro propaganda: one mainstream publisher issued a spy novel titled Assassinate Castro. Even President John F. Kennedy, a Playboy reader not likely to sample the sweat magazines, caught the anti-Castro bug; liberals were not immune.

In my previous post, I showed several wild examples of what I’ve dubbed the “evil Cuban Commie” cover subgenre, done by the pulp art masters Norman Saunders and Norm Eastman.

Some more evil Cuban Commie covers are shown in this post. They include issues with cover paintings by Eastman and two other great cover artists and illustrators, Syd Shores and Bob Schulz. 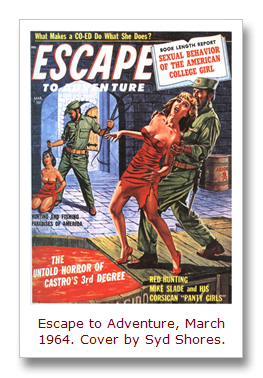 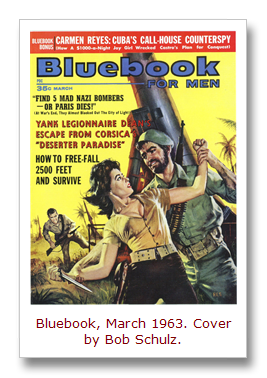 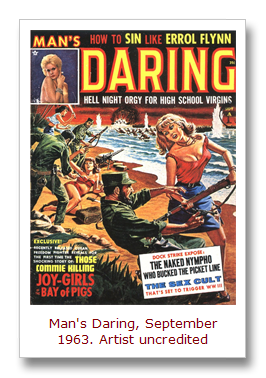 Of course, that’s a famous (and infamous) formula on men’s pulp mag covers, whether the men are evil Nazis, evil Japs, evil natives, or evil Commies.

The June 1964 issue of Man’s Story, with its cover painting by Norm Eastman, also features one of those classically campy cover story headlines: “SQUIRM IN HELL, MY LOVELY MUCHACHA!”

On some other covers shown in this post, the damsels have turned the tables and are dishing out the pain to bearded Cuban Reds.

Their cover art goes with stories that also have nice pulpy headlines like: 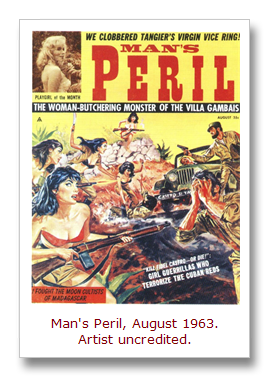 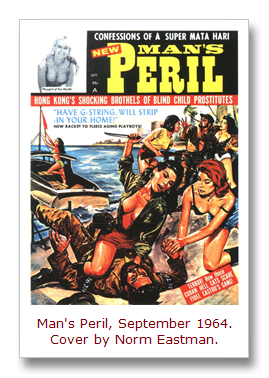