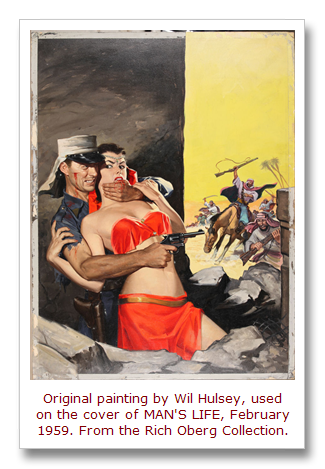 Last week, Rich Oberg noticed that I’d done a couple of recent posts about artist Wil Hulsey. So, he emailed me photos of some original Hulsey cover paintings he owns.

Those books were instrumental in generating renewed interest in vintage men’s adventure magazines and art and Rich deserves a lot of credit for preserving the pulp art treasures they feature. 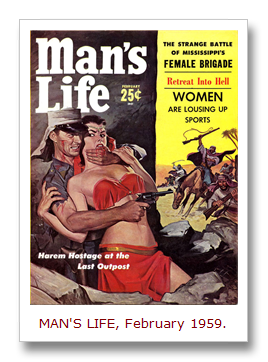 Hundreds of original paintings and illustrations in Rich’s collection weren’t shown in those books and haven’t appeared in any others. Most of the originals he owns have rarely been seen by people other than the artists, the art editors of the magazines that published them and a handful of dealers and collectors.

In his email last week, Rich sent me photos of eight original Hulsey cover paintings he owns. I’ll feature four of them in this post and four in the next.

Rich told me these paintings all appear to be oil on board, which seems to have been Hulsey’s preferred media. And, they were all done for either Man’s Life magazine or True Men Stories. In the men’s adventure genre, those are the two magazines that feature most of Hulsey’s cover paintings.

I asked Rich if original Wil Hulsey cover paintings are hard to find.

“Yes,” Rich said. “They just don’t come up for sale very often. I’ve never seen an original for one of the great animal attack covers he did, like the famous ‘WEASELS RIPPED MY FLESH’ cover and the ones you featured in another recent post on your blog.”

“Hulsey didn’t sign any of the paintings I’ve seen,” Rich noted, “and I can’t recall ever seeing his signature on a magazine cover. But his style was unique and you can almost always identify a Hulsey painting when you see one. His scenes tend to focus on one or a few dominant characters. The background is usually done more simply. His paintings are dramatic, with bold colors. They look great on the magazines and even better in real life.”

The Hulsey painting shown at the beginning of this post, used on the February 1959 issue of Man’s Life, is in what I call the “Arab peril” subgenre. It’s for the story “Harem Hostage at the Last Outpost.” 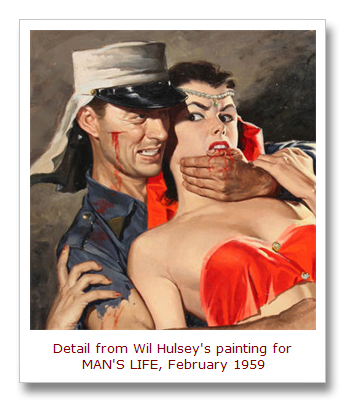 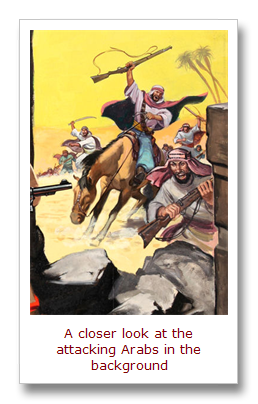 I’ve seen quite a few covers that show a manly white guy fighting classic, old-style Arab tribesmen to save a beautiful, scantily-clad girl (or girls).

But the example from Rich Oberg’s collection is unusual because the Foreign Legionnaire is using the harem girl as a human shield instead of saving her — and Legionnaires aren’t normally depicted as cowardly scumbags on men’s adventure magazines. Of course, if you look at the detail close-up above, you can clearly see that the harem babe got some some payback by biting the Legionnaire’s thumb and scratching his face.

Three of the eight Hulsey paintings Rich sent me photos of are World War II scenes. All of them (and Hulsey’s Arab peril cover) are what collectors would call “Good Girl Art,” or GGA for short, a term used for artwork that features sexy, well-endowed women in revealing clothing.

Oberg’s Wil Hulsey cover painting for the September 1958 issue of Man’s Life goes with the story “COXSWAIN HARDY AND HIS TWENTY MAROONED GEISHAS.” (Poor Coxswain Hardy really had his hands full in that story.) 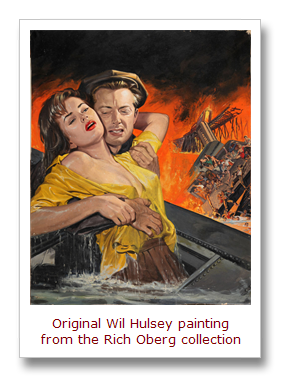 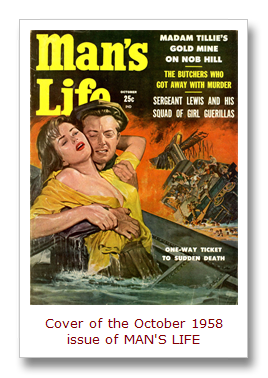 The World War II scene Hulsey created for the cover of the May 1961 issue of Man’s Life features another batch of beauties — the women involved in the famous “Breakout from the All Girl Stalag 1140.” (What, you never heard them? Well, you’re just not reading the right stuff.) 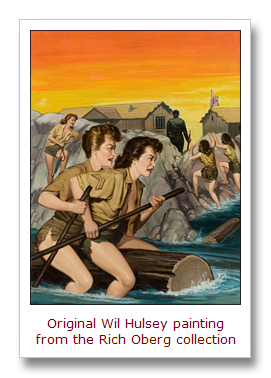 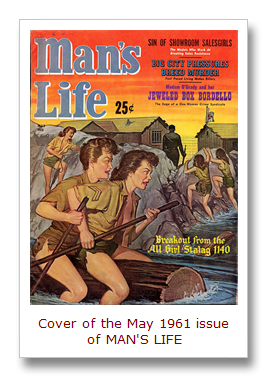 The third World War II Hulsey painting owned by Rich Oberg was used for the cover of the February 1960 issue of True Men Stories. And, like the Legionnaire painting, it’s unusual because it shows an American GI using a bodice-bursting Fräulein as a human shield to protect himself from some approaching German soldiers. Normally, a Yank on a men’s pulp mag cover would be saving the girl from evil Nazis. 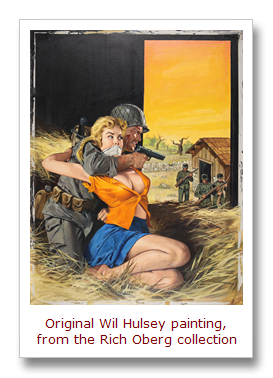 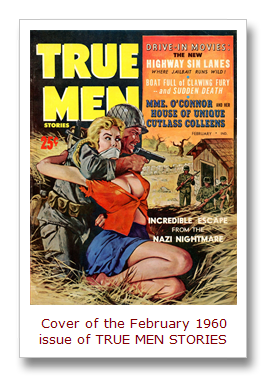 Hulsey’s painting for the February 1960 issue of True Men Stories goes with the story “INCREDIBLE ESCAPE FROM THE NAZI NIGHTMARE.” I own that issue and read the story. So, I can tell you this: [SPOILER ALERT!!!] the Fräulein is actually a treacherous Nazi spy, so the GI who’s using her for a shield had a good reason for doing so. And, she met an unfortunate, but well-deserved end.

I don’t own the February 1959 issue of Man’s Life with the Legionnaire using the hot, barely-clothed harem girl as a shield. But, in my imagination, the human shield act was just a ruse to trick the evil Arabs. The Legionnaire and harem girl make their escape together and she showed him her gratitude the way most other rescued damsels do in men’s pulp mag yarns. (Hey, it’s my imaginary version, so I can end it however I want.)

In my next post, I’ll show more original Wil Hulsey paintings from the Rich Oberg collection.

FURTHER READING: High-rez PDF copies of stories and complete issues you can download…