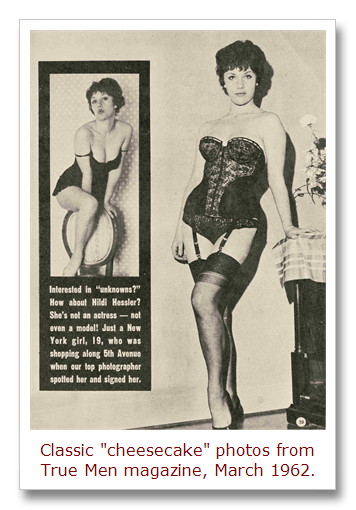 Unlike girlie mags of the same era, the “cheesecake photos” in classic men’s adventure pulp mags normally didn’t show fully exposed breasts, let alone full frontal nudity. In that respect, they’re pretty tame even by the standards of the 1950s and 1960s. They’re mild as Ivory soap compared to the more explicit girlie mags and hard core sex mags that developed in the 1970s.

Consider the photo spread at left, from the March 1962 issue of the men’s adventure mag, True Men Stories. No real nudity there. (And, none on this blog either. Sorry.)

By the late ‘60s, as men’s adventure mags faced increasingly, uh, stiff competition from the growth of more explicitly sexy magazines, they did start including Playboy-style photos. But that trend signaled the beginning of the end of the classic men’s adventure format.

By modern Motion Picture Association standards, classic men’s adventure magazines of the ‘50s and ‘60s would be rated somewhere between PG and PG-13. And, most of them were viewed that way back then.

The men’s adventure mags weren’t “dirty magazines.” Their images of scantily clad nymphs and sweaty bare chested men, their depictions of vicious attacks by (and on) animals, their blood-drenched war stories and even their bondage and torture illustrations were somehow deemed more acceptable than those, ahem, “under-the-counter” magazines.

For example, in the 1957 edition of Writer’s Market, the editors of Man’s Life said their magazine “uses material of interest to men, but nothing cheap or sordid.”

There’s a difference. Got it?

NOTE FOR VINTAGE GIRLIE MAG FANS: To learn more about that genre, check out Dian Hanson’s terrific “History of Men’s Magazines” series. Below is a link to Volume 3, focusing on the 1960s.