Stag was one of the most successful and long lasting of the men’s pulp mags. It was first published in 1950 and ran in the classic men’s adventure style format until 1969. Unlike most other men’s adventure mags, Stag didn’t go out of business when “girlie magazines” began to dominate the men’s magazine market in the late ‘60s and early ‘70s. Instead, Stag went with the flow, added Playboy-style photos and transformed into a girlie magazine. It had a respectable run in that format until 1992. (Well, maybe “respectable” isn’t quite the right word. Let’s say “an impressive run.”) 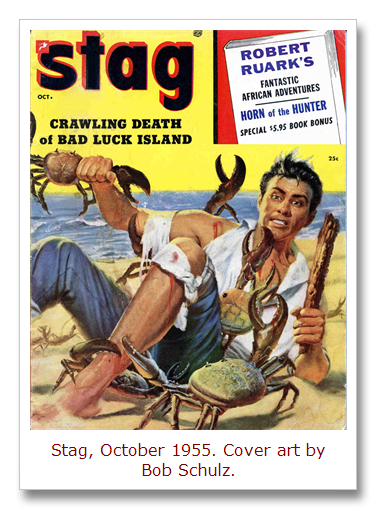 During it’s men’s pulp mag phase, Stag had some great painted artwork on its covers. One of my favorites is on the cover of the October 1955 issue. It was painted by Bob Schulz and is in the WEASELS RIPPED MY FLESH category of cover art. It’s Bob’s vision for an article titled “Crawling Death of Bad Luck Island.”

It shows vicious crabs, with blood on their claws – blood from the wounds of a man who is fighting them off with his bare hands and a stick. Wow!

Of course, the “true stories” in some men’s pulp mags were actually pulp fiction, or semi-true at best. But Stag published a lot of real non-fiction adventure articles. The “Crawling Death” story could be true. Or at least semi. It does include some verifiable facts.

It takes place on the island of Trinidad. “Not the resort in the Caribbean,” the author explains, but rather a lonesome isle “700 miles from Brazil in the middle of the South Atlantic.”

It’s a tale about post WWII treasure hunters looking for buried treasure they’d heard was on the island. The story does involve scary crab attacks. And, there really is a Trinidad Island off Brazil that’s said to have a hidden treasure somewhere.

Check it out in Google’s digitized version of the 1906 edition of Chambers’s Concise Gazetteer of the World. On page 706, it’s the second Trinidad island that’s mentioned. The Gazetteer (I love that old word) says:

So, now, sit back and read the “Crawling Death of Bad Luck Island” for yourself. Just click on the image below to download the entire story in PDF format. Then tell me if you think it’s a true story. 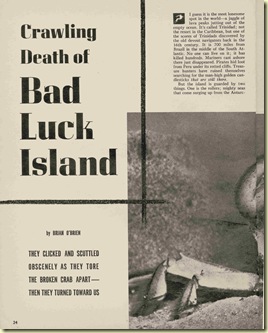