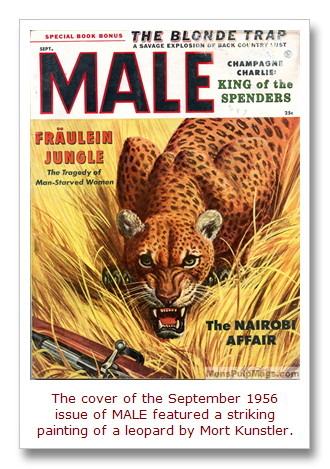 During my recent interview with legendary artist Mort Künstler, he told me that during a typical month in the 1950s and 1960s he usually created three cover paintings and at least two interior illustrations for the men’s adventure magazines published by Martin Goodman’s publishing company Magazine Management (mags like STAG, MALE, MEN and FOR MEN ONLY).

Of course, Mort also did covers and interior illos for other magazine publishers, as well as for books. But Magazine Management was his biggest illustration client in those decades, before he gained his current fame as one of America’s premier historical artists.

In this post, I’ll show some issues of Mag Management magazines from the 1950s that featured both a cover painting and one or more interior illustrations by Mort.

One of the things that becomes apparent when you look at a lot of Mort’s artwork is his enormous range.

Even when he was a young man and not long out of art school in the ‘50s, Mort could create superb paintings of virtually any type of subject or scene.

For example, for the September 1956 issue of MALE, he created a striking painting of a snarling leopard poised to pounce (presumably on the hunter whose rifle is seen in the foreground).

He also created two interior illustrations for that same issue which are quite different from the cover painting in terms of subject and style.

One is a cool two-page, noir-flavored scene. The left-hand page, showing a luscious lady in bed, is a duotone, using black and what looks like a burnt orange color. In the right-hand part of the scene, the cops at the door are done in black and shades of grey.

The guy looking in the mirror behind the babe in bed is the subject of the story: “CHAMPAGNE CHARLIE: KING OF THE SPENDERS,” a chap who was adept at “fleecing women and making them love it.”

Mort’s second interior illustration for the September 1956 issue of MALE is another orange-tinted duotone, featuring a striking portrait of the woman featured in the story and some really interesting brushwork in the background. 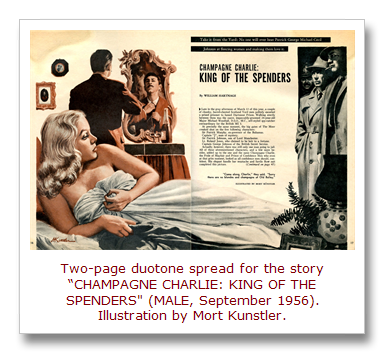 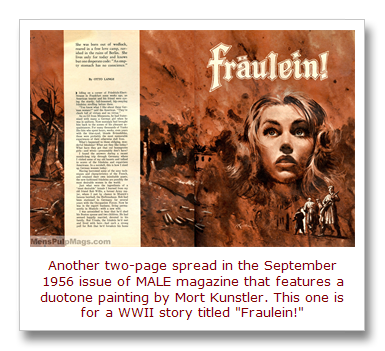 The cover of the June 1957 issue of MALE features an early example of a Civil War scene painted by Mort. Later in his career, starting in the 1980s, Mort became especially known for his paintings of people and scenes from the American Civil War. (They are now sold as fine art prints and featured in in a series of books.)

Inside that same issue of MALE is another 2-page spread that uses one of Mort’s superb duotones. This one makes great use of red to highlight the gorgeous “half-clothed blonde” on the right-hand page. The author of the story this illo goes with was Bob Bristow.

I know little about Bristow except that he also wrote some classic “sleaze paperbacks,” such as Sin Street — a 1959 book about a place where (according to the cover blurb) “the girls are young — and available, the drinks are strong, and all a man needs is money.” 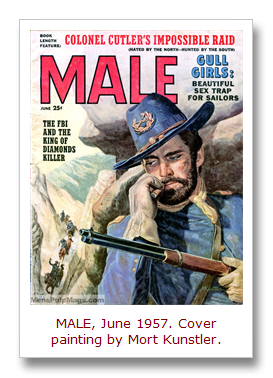 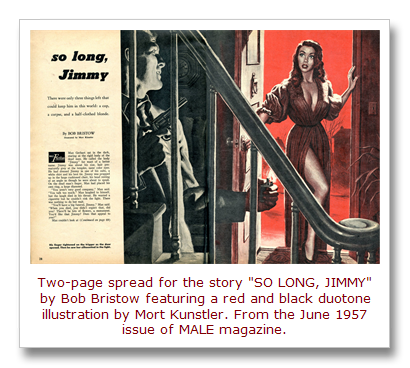 The Mort Künstler cover painting on the September 1958 issue of STAG, another of Magazine Management’s flagship periodicals, is a cool exotic adventure scene that goes with the story “THE BLONDE CAPTIVE OF VENEZUELA’S JUNGLE EMPIRE.”

Mort also did the interior illustration for that story, which shows the winsome “blonde captive” doing a little skinny dipping. 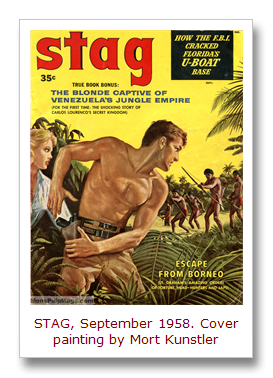 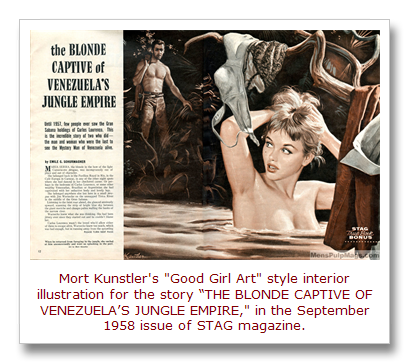 The author who wrote the story was Emile C. Schurmacher.

I also know Schurmacher wrote quite a few books

and even some television scripts. But I’ve yet to find any substantial biographical info about him or any comprehensive list of his stories or books. (If you know where to find more info about Emile, please let me know.)

Mort Künstler never did the kind of extreme bondage and torture cover paintings associated with the “sweat magazine” subgenre of men’s adventure magazines. However, some of his artwork did feature captive damsels in distress and mistreated men.

One example is the cover painting he did for the May 1959 issue of STAG. It shows a woman in a bamboo cage being pulled by American prisoners of war, as Japanese soldiers prod them along with bayonets. 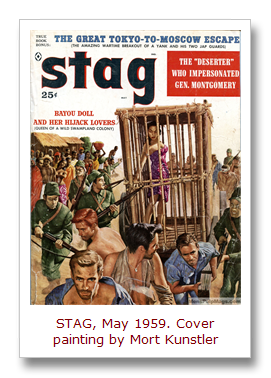 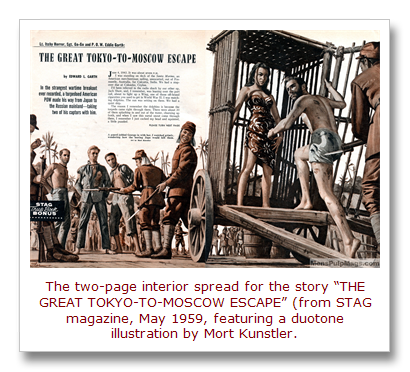 In my next post, I’ll show some of my favorite Mort Künstler covers from the Swingin’ Sixties.

In the meantime, you can learn more about Mort and his amazing career by visiting his main website, his vintage illustration website, KunstlerIllustrations.com — and by reading some of the many books that feature his paintings.