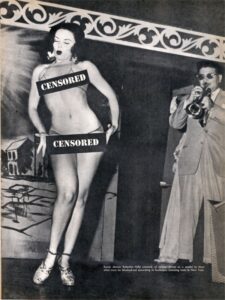 My last post provided a look at some of the wild stories and photos in the February 1954 issue of MAN’S MAGAZINE, the legendary painting vs. photo issue mentioned in the Taschen book MEN’S ADVENTURE MAGAZINES.

Today’s post features more articles from that issue that I find particularly interesting from a historical and cultural perspective.

One is “I Censor Burlesque.”

It was written by Humbert Satriano, a New York City inspector whose probably thankless but enjoyable job was to watch burlesque shows.

It was his duty to determine if the shows conformed to the city’s current indecency regulations, which were actually more prudish in 1950s than they were prior to World War II.

Humbert explains that in the mid-1940s Mayor Fiorello La Guardia had imposed stricter rules for burlesque shows performed anywhere in The Big Apple. 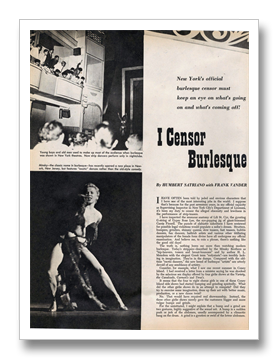 Chief among those rules were these three:

“(1) No female shall be permitted on a stage in any scene, sketch or act with breasts or the
lower part of the torso uncovered, or so thinly covered or draped as to appear uncovered.
(2) Scenes, sketches or acts whenever a female appears originally fully or partially clothed and gradually disrobes shall conform to the above rule.
(3) No vulgar, obscene or indecent language or conduct offensive to decency or propriety shall be
indulged in by performers.”

To enforce these rules, poor Humbert had to attend hundreds of burlesque shows and watch thousands of strippers do their acts, including some of the great Burlesque Queens such as Lili St. Cyr and Gypsy Rose Lee.

Humbert viewed the pioneering pros like Cyr and Lee as true artists compared to the newer crop of striptease performers he was seeing in 1954.

“The truth is, nothing bores me more than watching modern burlesque,” he opined. “Today’s strippers —  described by the Minsky Brothers as ‘hip-heavers, tossers and breast-bouncers’ and by author H. L. Mencken with the elegant Greek term ‘ecdysiasts’ — are terribly lacking in imagination. They’re in the dumps. Compared with the old-time ‘exotic dancers,’ the new breed of burlesque ‘artists’ are utterly devoid of any semblance of artistry.”

Humbert would probably be happy to know that classic burlesque techniques are being revived by today’s “neo-burlesque” shows. (Some of the best of which are hosted by my fellow vintage men’s magazine aficionado Jason “Java” Croft, creator of Java’s Bachelor Pad.)

There are some other less attractive mid-20th century cultural traditions featured in articles in the February 1954 issue of MAN’S MAGAZINE.

They include: running with the bulls in Pamplona (“Running Wild!”), portraying all sharks as killers that should themselves be killed without compunction (“Killer Sharks of Raraka”) and fraternity hazing rituals at American high schools and colleges (“Field Day for Sadists”). 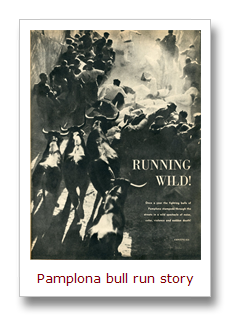 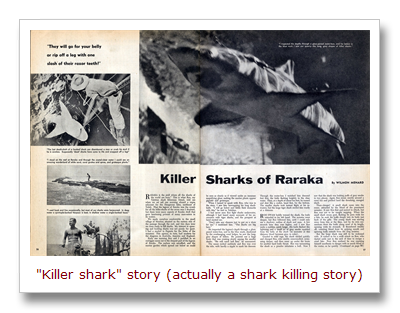 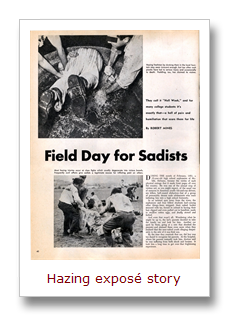 For bitter divorced guys and those contemplating or facing divorce, there’s also a sympathetic article about how strict and “unfair” the divorce laws were in the 1950s, titled “It’s the Man Who Pays.” 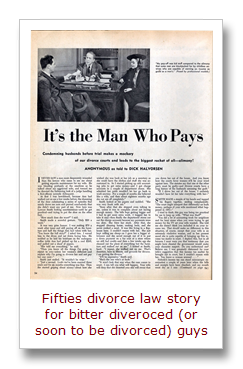 The indignant subhead sneers: “Condemning husbands before trial makes a mockery of our divorce courts and leads to the biggest racket of all — alimony.”

One of the fascinating parts of this article is a full-page sidebar that lists the grounds for divorce in all of the U.S. states and territories at the time.

Back in the Fifties, divorce was still frowned upon culturally and legally.

You needed to have — or at least claim to have — a reason that met the letter of law to get unhitched.

In some states, there were relatively few valid grounds for divorce.

For example, according the the list published in MAN’S MAGAZINE, there were only three legal grounds for divorce in New Jersey: adultery, desertion or “extreme cruelty.” (Apparently, mild cruelty wasn’t a good enough reason.) 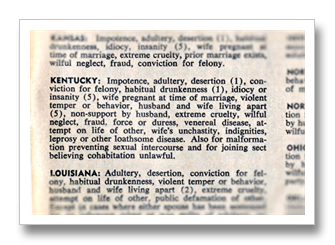 In some states, you had more options.

Under Kentucky law, for instance, the grounds for divorce included:

By the way, according to a note about the list of state divorce laws: “The numeral in parentheses indicate the number of years the particular condition must have existed in order to constitute grounds for divorce.”

In other words, in Kentucky you had to prove your spouse had exhibited “idiocy or insanity” for at least five years if you were trying to use one of those conditions as a reason to get a divorce. You were stuck with the idiot or psycho you married until their mental problem hit the five year mark.