Adventure magazine was obviously a men’s adventure mag. The full title was ADVENTURE: THE MAN’S MAGAZINE OF EXCITING FICTION AND FACT. If that didn’t make it clear that this was an adventure magazine for manly men, the cover headlines for the articles made it crystal. 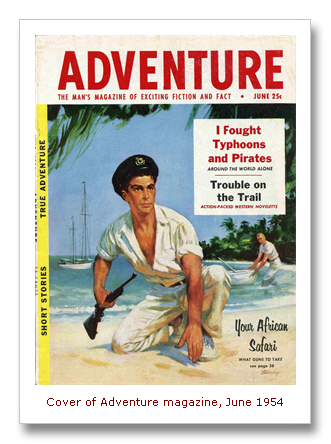 For example, the cover of the June 1954 issue of Adventure features these headlines:

“I Fought Typhoons and Pirates Around the World Alone”

“Trouble on the Trail” (an “Action-Packed Western Novelette”)

“Your African Safari: What Guns to Take”

Obviously, a pirate-fighting solo sailor would be a “real man.”

And, of course, white bwanas who slaughtered African animals (with the help of native guides and big frakking guns) were Hemingway-level manly men.

I don’t know if Ernest Hemingway ever wore a truss, but many readers of men’s adventure magazines did. One telltale sign is that almost every issue had a truss ad or two, or three – or more.

Many men’s mag readers in the ’50s and ’60s were blue collar workers. A lot had jobs that required heavy lifting. Hence a lot of them had hernias, A.K.A. ruptures. Back then, the use of surgical techniques to repair hernias was not as common or sophisticated as it is today. So, many hernia sufferers wore trusses – strap-on contraptions that provide support and (when they work) keep ruptures and the pain they cause from getting worse. 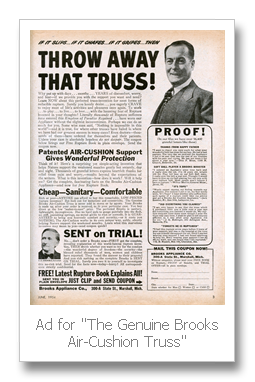 I can imagine the late OxiClean pitchman Billy Mays shouting it out:

“Learn NOW about this perfected truss-invention for most forms of reducible rupture. Surely you keenly desire . . . you eagerly CRAVE to enjoy most of life’s activities and pleasures once again. To work . . . to play . . . to love . . . with the haunting fear of Rupture lessened in your thoughts.”

“Literally thousands of Rupture sufferers have entered this Kingdom of Paradise Regained . . . have worn our Appliance without the slightest inconvenience.”

Holy Moly! A more comfortable, more effective truss that improves your work life, your leisure time and your sex life! If I had a hernia, I’d have to get that! The ad said all you had to do to get a step closer to the promised Hernia Heaven was to send in the coupon for the “Free Rupture Book in plain envelope.” (I’m not sure why it was sent in a secrecy-shrouded “plain envelope.” Was it somehow embarrassing for anyone to know you had a hernia back then?)

One of my other favorite ads in the June 1954 issue of Adventure is an ad for accordions. As a former accordion player in my youth, I just knew they were manly musical instruments. 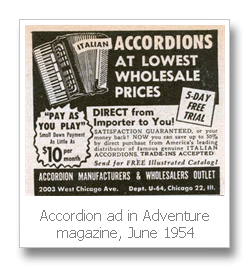 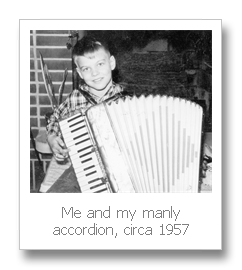