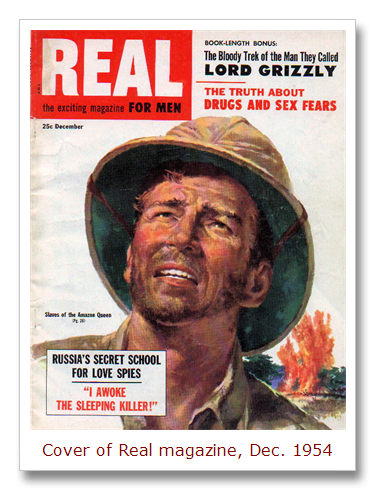 A common article topic in the men’s postwar pulp magazines was illegal drugs.

An example of the latter is a cover story from the December 1954 issue of Real magazine, “THE TRUTH ABOUT DRUGS AND SEX FEARS.” It’s especially interesting in that it talks about “marihuana” in a fairly rational way. (FYI, traditionally in laws and health-related articles and publications, marijuana is often spelled with an “h” instead of a “j.”)

Some drug-related articles in men’s adventure magazines of the 1950s and 1960s were attributed to fictitious doctors or psychologists. The marijuana article in Real actually was written by a real psychologist, Robert Mines. At the time, Mines was Chief Psychologist at the North Carolina State Hospital in Raleigh.

The article does manage to combine drugs and sex. (Hey, it’s a men’s pulp mag.) But Mines’ discussion of marijuana is so rational – especially for 1954 – that an excerpt is posted on the Schaffer Library of Drug Policy website, a pro-legalization leaning source of historic drug and “drug war” information that’s often used by journalists and researchers.

In the article, Mines said…

Question: Is it true that Marihuana will sexually stimulate almost everyone who smokes it?

Answer: One of the leading authorities in this country on Marihuana is Dr. J.D. Riechard, Medical Director (retired) of the U.S. Public Health Service. Although the legends about Marihuana will probably die hard, his research has yet to turn up any evidence to support the commonly held views about it. He has never, for instance, found the slightest proof that any normal person will, after smoking Marihuana, almost instantly shed his usual moral standards. “And there is simply no indication,” he adds, “that Marihuana can cause a well adjusted person to commit a crime.”

“The people who do abnormal things after smoking reefers,” one doctor dryly remarked, “are people who were abnormal in the first place – and when they smoke reefers, it’s a result of their abnormal leanings.”

Dr. Reichard has also found no evidence that the use of Marihuana increased sexual potency. As a matter of fact, he’s found that far from stimulating a person, it has a quieting effect.

In preparing this article, I was able to establish contact with several addicts, all of whom substantially agreed with this – “When I smoke a stick, I just get dreamy,” a typical addict told me.

So, there it is: the REAL truth about reefer “addicts” and reefer madness – from Real magazine, “the exciting magazine FOR MEN.” (Real men, of course.)