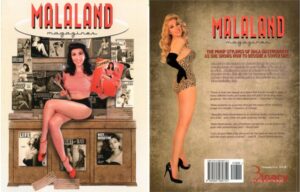 Many of the nearly 400 members of the Men’s Adventure Magazines Facebook Group associated with this blog are writers, artists or both.

Several have new books that I highly recommend to fans of vintage men’s magazines.

I mentioned one in my previous post: the latest book by the former men’s adventure writer Robert F. Dorr, titled MISSION TO TOKYO.

Another is Tom Ziegler’s book about Bruce Minney, one of the greatest of the many great artists who worked for men’s pulp adventure mags.

That book, BRUCE MINNEY: THE MAN WHO PAINTED EVERYTHING, was featured here not long ago in a series of guest posts by Tom.

Today’s post is about a new book by another talented person who often drops by the Men’s Adventure Mags FB group, Mala Mastroberte.

Actually, she’s one of those people who fit the term multi-talented.

Mala is a photographer and a digital artist who uses those skills to make unique recreations of vintage magazine and paperback book covers. 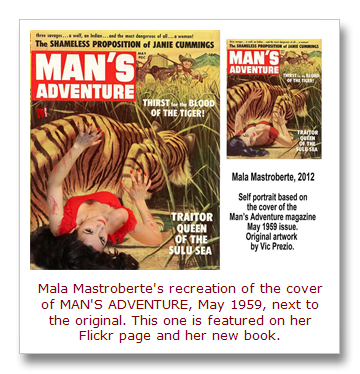 She’s especially fond of recreating covers from the pulp genres, including pulp fiction and pin-up magazines from the 1930s and ‘40s and men’s adventure mags, detective mags and “sleaze paperbacks” from the ‘50s and ‘60s.

Mala also happens to be an eye-poppingly gorgeous model.

She’s the sole model for her own cover recreations, which she started posting on her Flickr page several years ago.

Using wigs, makeup, vintage clothing, and her photo and Photoshopping skills, she makes images of herself and inserts them in place of women shown on vintage magazine and paperback covers, creating new art from old.

She is also increasingly popular as a model for top modern glamour girl photographers and artists, such as Mike James and Sean Smith.

On top of all that, Mala now has two books to her credit.

She self-published her first book, titled LINE-UP, last year. It focuses on her photo recreations of true crime and detective magazine covers.

Other recent and forthcoming books from Binary include THE ART OF JACK DAVIS, THE EARLY PHOTOGRAPHS OF BETTIE PAGE and ARTIST & MODELS: THE GLAMOUR ART OF KENT STEINE. (Kent is a modern pinup artist and author who is also a member of the Men’s Adventure Magazines Facebook Group.) 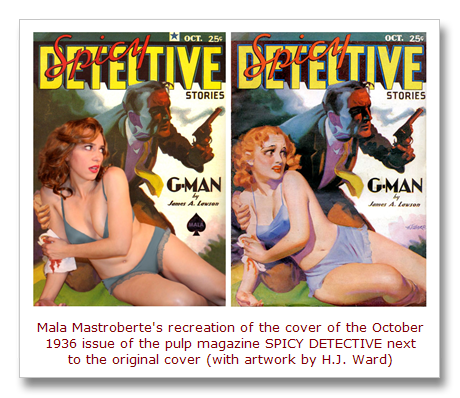 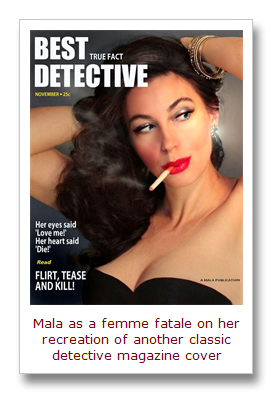 She explains what the “Malaland” concept means to her in the book’s introduction:

“We all have a place we like to go to – to escape the everyday routine, to forget all troubles, or just to feel at home and be yourself. This is precisely what Malaland is for me. It is a place, a moment in time. but most of all – a state of mind. Fantasyland is usually a solitary place, even if shared with numerous characters. It is still a lone experience, but in a positive meaning of the word. It is as unique, as each individual. An exclusive room of one’s own — to quote Virginia Woolf — a place where you can be free, unrestricted, unsupervised and independent. Free.” 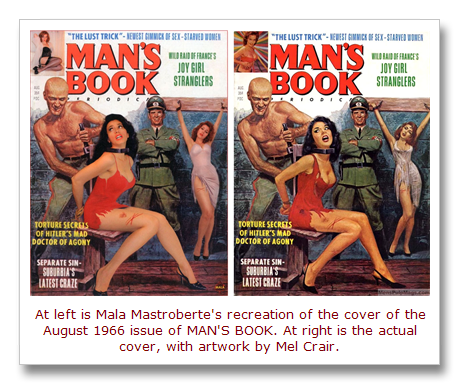 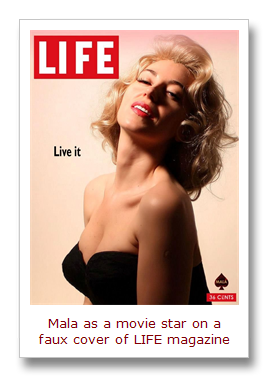 In a note on Flickr about her recreation of the cover of the May 1959 issue of the men’s pulp magazine MAN’S ADVENTURE (which is included in her new book), Mala provides some of her thoughts on the the depiction of women on men’s magazine covers and the iconic damsel-in-distress art common to men’s pulp mags:

“Working with vintage illustrated magazine covers for a while now, I noticed that the girls gracing the covers of men’s magazines seem to have more fun than the ones adorning ladies publications (as beautiful and flawless as the latter ones also are). They exude health, happiness and of course unabashed sex appeal, which I suppose are exactly the qualities any man would like to see in a woman. Nothing wrong with being sexy, healthy and happy about it, but still these images caused and still cause a lot of controversy. Man’s adventure genre brings out a whole other level of male fantasies, putting damsels in all kinds of distress, in desperate need of being rescued by a hero. Or at least I should hope that is the idea… Now that’s objectification for you! or is it?” 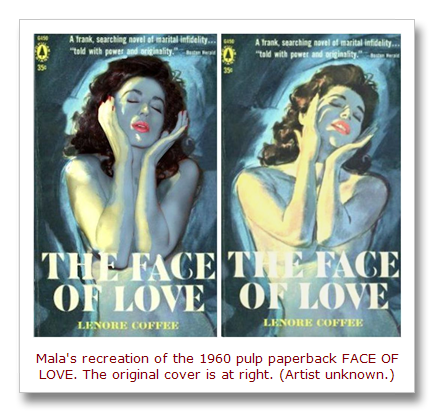 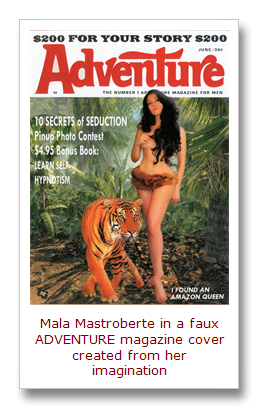 Mala’s book introduction provides more of her interesting perspective on the type of vintage “Good Girl Art” that features femme fatales and damsels in distress. She explains:

“Pin-up imagery used to be, or still is, perceived by some as objectifying and degrading women. Being aware of the social status of women at the time when pin-ups were at the height of their widest popularity, makes me suspicious about the honesty of those smiles. But who can deny those pretty eyes? I know I can’t! I am buying whatever it is they are selling. Just wonder sometimes, what is it exactly… Sex? Health? Youth? Or maybe just pure joy of life?

I do not advocate chauvinism, violence, abuse, guns or smoking, but take guilty pleasure from those vivid images and a certain comfort in knowing that they are not real. Many of the cover images portray women in various stages of undress, sometimes in trouble. sometimes causing trouble, but always very feminine and beautiful. Whatever the scene may be, those images are nothing short of powerful.

The genre used to be predominantly male, with very few female artist exceptions. It was an industry directed at male audiences. Today, women reclaim the genre as both, creators and recipients, embracing the fantasy and making it real. This is my goal as well. By embodying these covers I personify the characters and the narrative, the drama, the style and the aesthetic, the ethos of the vintage era. I try to bring them to reality and to the present through my own body. I enter that world, go deep inside and bring it out.” 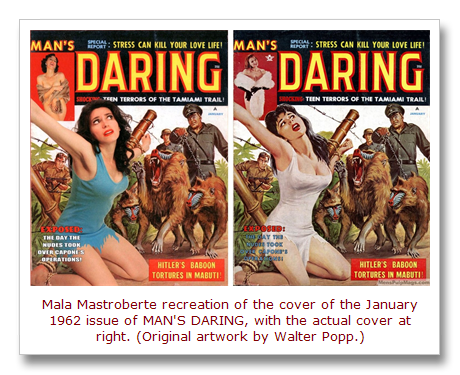 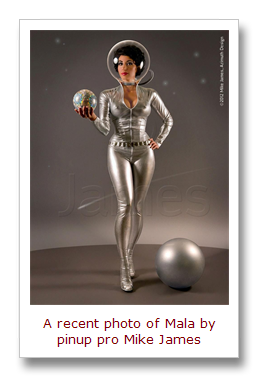 Mala’s recreations of men’s adventure magazines covers include some by the best artists who worked for the genre, such as Mel Crair, Walter Popp, Clarence Doore, and Bruce Minney.

She also creates faux men’s pulp mag covers that spring from her own fertile imagination and faux covers from other genres (like the ADVENTURE and LIFE covers shown above). 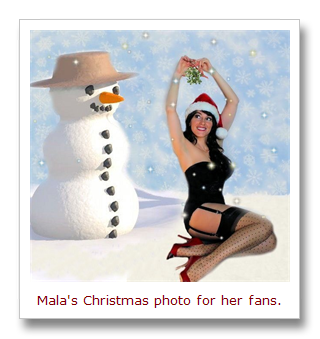 Stay tuned for an upcoming interview with Mala here on MensPulpMags.com.

In the meantime, buy her new book MALALAND MAGAZINES. You will be amazed.

Also check out Mala’s online store, the MALALAND KIOSK, where you can order limited edition posters of her unique pulp paperback and magazine cover recreations.

If you want to learn more about Mala and keep up on the latest news about her, be sure to visit both of her Facebook pages: her personal page and her Malaland page.

They each feature different photos.

And, believe me, there are so-o-o-o-o-o many good ones to see, Mala needs two Facebook sites.