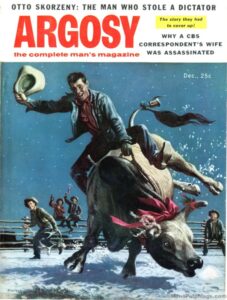 Unlike mainstream magazines published in the 1950s and 1960s, most men’s adventure magazines did not feature Christmas-themed covers on their December issues.

So, alas, there are no covers of MAN’S LIFE or TRUE MEN STORIES showing a herd of vicious reindeers ripping Santa’s flesh.

There are no December issues of MAN’S BOOK or WORLD OF MEN showing Santa rescuing a scantily-clad Mrs. Claus from evil Nazis, or anything like that. 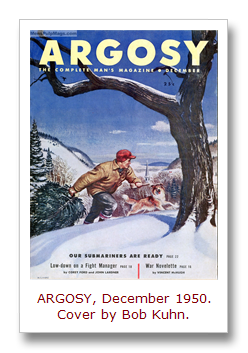 However, there were two vintage men’s adventure magazines that did have some Christmas covers — ARGOSY and TRUE.

Among my favorites are issues of ARGOSY that feature artwork by Robert “Bob” Kuhn, one of the most renowned artists who provided artwork to men’s adventure magazines.

The “manliest” ARGOSY Christmas cover painting Kuhn created is probably the one used for the December 1955 issue.

It features a yeehaw-ing cowboy riding a bull sporting a Christmas ribbon around it’s neck and Christmas ornaments on its horns, on a beautiful starry night.

I also like Kuhn’s nostalgic Christmas painting for the December 1950 issue, showing a man and his dog coming home with the family Christmas tree, which he clearly cut down himself the old-fashioned way.

Bob Kuhn was born in Buffalo, New York in 1920 and studied commercial art at the Pratt Institute in the late 1930s.

In the 1940s, ‘50s and ‘60s he primarily worked as an illustrator for men’s outdoor sport and adventure magazines, such as FIELD AND STREAM, OUTDOOR LIFE, TRUE and ARGOSY.

He he also did illustrations for books and advertisements.

As you’ll find by perusing the many websites that mention Kuhn, he is best known and beloved for his wildlife art.

And, most of the cover paintings Kuhn created for ARGOSY and other magazines were wildlife and hunting scenes that foreshadow his later work. 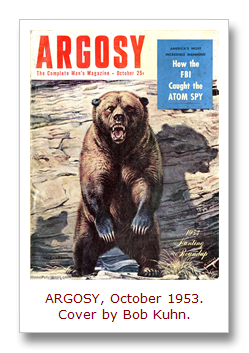 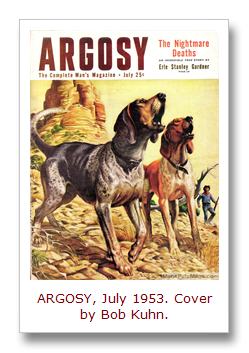 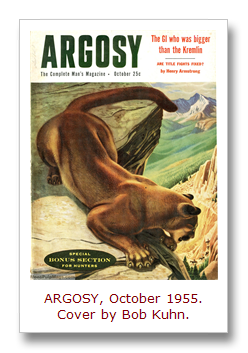 In 1970, Kuhn basically stopped doing commercial artwork. From then until his death in 2007 he focused on doing wildlife paintings for art galleries and collectors.

Paintings from that phase of Kuhn’s career have won many awards and hang in the permanent collections of a number of museums.

In 1991, for example, he was awarded the prestigious 1991 Prix de West award from the Academy of Western Art for his painting “Lair of the Cat,” which now resides in the National Cowboy Hall of Fame in Oklahoma City. 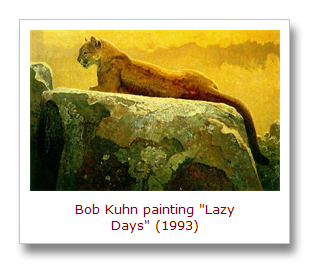 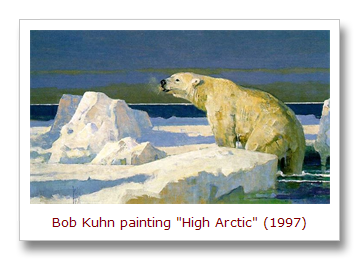 There are quite a few lushly illustrated books that showcase Kuhn’s wildlife art.

They include: THE ANIMAL ART OF BOB KUHN

(first published in 1973 and written by Kuhn himself); THE ART OF BOB KUHN (one of the “Masters of the Wild” series published in 1989); BOB KUHN: PAINTING THE WILD

(published in 2002 by the National Museum of Wildlife Art); and, WILD HARVEST: THE ANIMAL ART OF BOB KUHN

(a 2009 retrospective that uses Kuhn’s famous “Lair of the Cat” as the cover art).

The most recent book about Kuhn’s work is BOB KUHN: DRAWING ON INSTINCT. It was published in June 2012 by the University of Oklahoma Press to go with a traveling exhibit mounted by the National Museum of Wildlife Art.

By the way, the museum has an excellent page about Kuhn on its website, which includes examples of his paintings and a fascinating time-lapse video showing him creating a painting from start to finish in 2006. 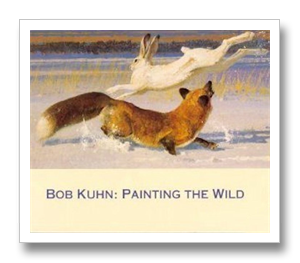 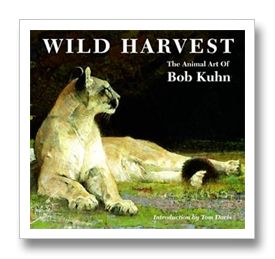 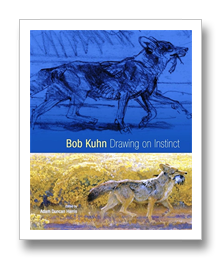 I hope Santa brings you something good tonight. Maybe one of the books about Bob Kuhn’s art.

It probably won’t be the gifts suggested in the advertisements on the back cover of the December 1955 issue of ARGOSY. 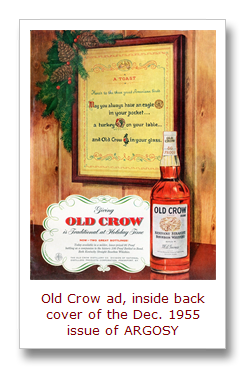 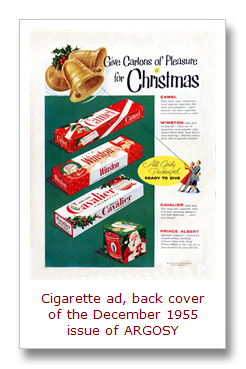 I don’t think it’s politically correct nowadays to give someone a bottle of Old Crow for Christmas, let alone a carton of Camels, Winstons or Cavaliers.

Hell, they don’t even make Cavalier cigarettes anymore. And, doctors warn against smoking cigarettes instead of endorsing them.

And, Happy Holidays from MensPulpMags.com.