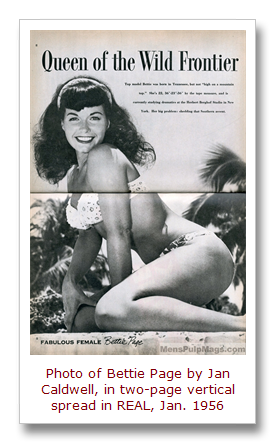 My previous post here focused on stories about four famous killers who are featured in the January 1956 issue of REAL magazine.

Bettie Page was at the height of her initial fame as a pinup queen in January 1956.

The year before, she had appeared as a PLAYBOY centerfold, in the January 1955 issue.

Many books and sites say she won the title “Miss Pinup Girl of the World” in 1955 as well, though I have yet to find out what contest or publication gave her that title.

Photographs of Bettie appeared in dozens of different men’s magazines in the mid-1950s, including some of the top men’s pulp adventure mags.

The January 1956 issue of REAL named her its “Fabulous Female” of the month. REAL’s fab fems were showcased in two-page spreads, sort of like a centerfold.

In Bettie’s case it was a vertical spread showing her on a beach in a two-piece bathing suit.

The photo was taken by Jan Caldwell during one of Bettie’s annual mid-Fifties trips to Florida. 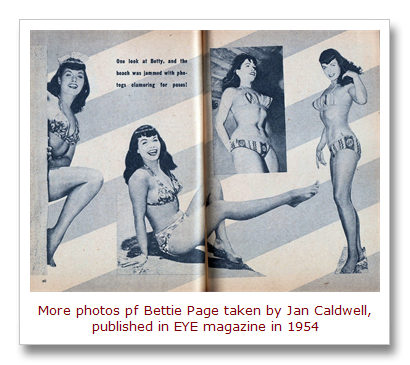 As noted a post on Jim Linderman’s always fascinating Vintage Sleaze site, Caldwell was one of the few truly good photographers who took glamour photos of Bettie.

Two others — H.W. Hannau and the pioneering female pinup photographer Bunny Yeager — were also based in Florida.

The headline used for the photo in REAL called Bettie “Queen of the Wild Frontier.”

That’s not a reference to the wild bondage and fetish photos and films taken of Bettie by Irving Klaw bewteen 1952 and 1957. It’s a reference to Walt Disney’s TV series about the legendary Tennessee frontiersman Davy Crockett, which was a huge hit at the time.

The brief text that goes with the photo says:

“Top model Bettie was born in Tennessee, but not ‘high on a mountain top.’ She’s 22, 36”-23”-36” by the tape measure, and is currently studying dramatics at the Herbert Berghof Studio in New York. Her big problem: shedding that Southern accent.”

The mention of Bettie’s acting career was actually a bit outdated.

She did take some acting classes at the Herbert Berghof Studio in 1953.

And, according to various bios, she did get a handful of roles in mainstream TV shows (The United States Steel Hour and The Jackie Gleason Show) and off-Broadway plays (Time is a Thief and Sunday Costs Five Pesos).

As things turned out, her best-known and still most-popular appearances are in the racy short films Irving Klaw sold by mail order and the Burlesque-style movies Striporama (1953), Varietease (1954) and Teaserama (1955).

Although Bettie appeared in those Burlesque-inspired films, she wasn’t really a Burlesque Queen.

But the other glamour girl featured in the January 1956 issue of REAL was.

Her stage name was Princess Do May (sometimes seen spelled as DoMay and occasionally as May Do). She was billed as “The Cherokee Half-Breed” and performed in Indian costumes.

Do May’s real name was Doe Mae Davison. Her mother was Cherokee; her father, Irish. She was strikingly beautiful and built like a brick tipi.

She didn’t become as famous as Burlesque Queens like Gypsy Rose Lee, Lili St. Cyr or Blaze Starr. But she was in the top tier and you can find publicity photos of her on hundreds of sites on the Internet. 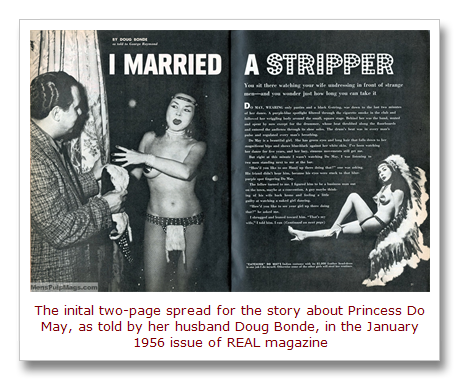 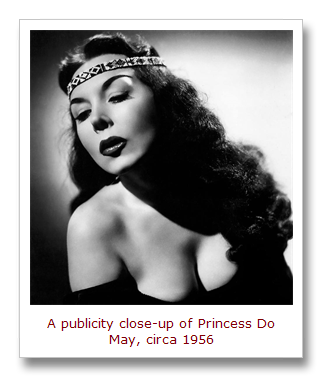 The article about Princess Do May in REAL is an “as told to” story titled “I MARRIED A STRIPPER.” It’s a historically interesting account told to writer George Raymond by Do May’s husband and manager, Doug Bonde.

Doug told Raymond he met Do May some years before when she was performing at a casino in Las Vegas. He said he was a crap dealer and croupier there at the time, though he had previously worked as a trainer for boxers. (Including, he claimed, Rocky Graziano). Doug and Do May fell in love and soon began planning their marriage.

“I wanted her to quit dancing and she wanted me to quit gambling,” Bonde says. “We made a deal. She could go on dancing for a few more years, but only if she tried for big-time money. I would manage her and run her act as a business.”

Do May’s beauty and talent as a performer and Bonde’s business instincts helped boost her career into the upper echelons of the Burlesque circuit. She toured the US, Canada, Mexico and, according to one old newspaper ad I found, she also performed in London. 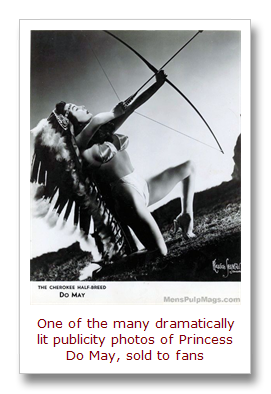 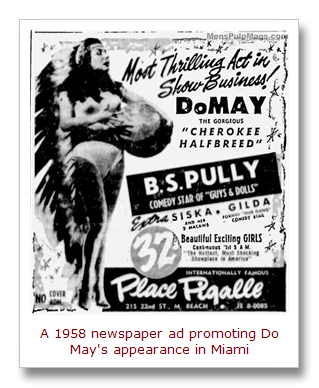 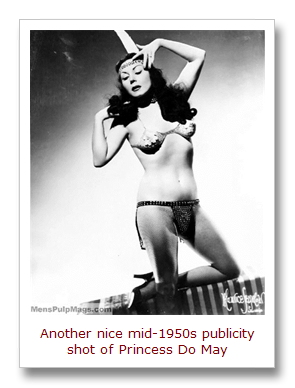 As Doug explains in the article, top strippers could make thousands of dollars per week. But they also had high overhead for costumes and travel. Bonde notes that Do May’s trademark feather headdress alone cost $1,000 (over $8,000 in current dollars).

The text of the story and several of the photos suggest that Bonde took his job as Do May’s business manager very seriously and was sensitive to having people assume he was taking advantage of her.

“For the benefit of people who think I’m free-loading on my wife,” he says, “I’d like to point out that my day is 19 hours long. I drive Do May and our baggage trailer about 40,000 miles each year. I handle all her publicity, booking, props and lights. I get her music arranged and her wardrobe designed.” 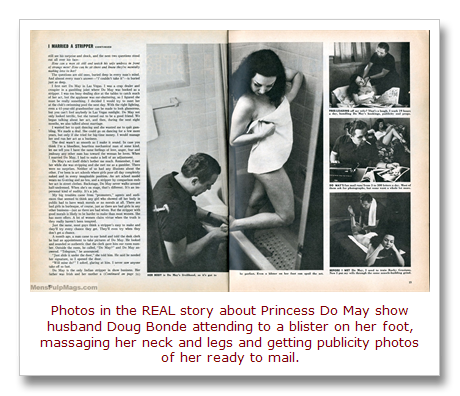 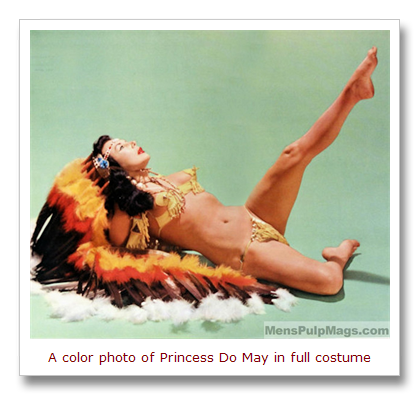 “Her body is Do May’s livelihood, so it’s got to be perfect,” he explains in a caption. “Even a blister on her foot can spoil the act.”

Bonde said he also read and responded to Do May’s fan mail for her, which ran from “three to 300 letters a day,” and handled sales of her autographed photos.

He seems to have done a fairly good job of being her publicist based on things like the article in REAL, the photo spreads of her in other men’s magazines (which included some nude pics) and some of the newspaper ads and articles I found about her online.

In fact, today, publicity photos of Princess Do May, in various stages of undress, show up on many websites. So, she is better remembered than many Burlesque strippers. 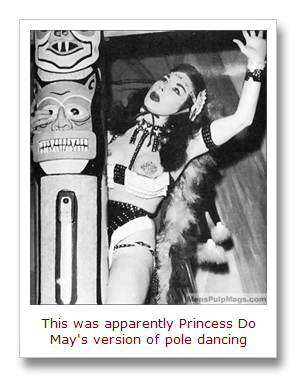 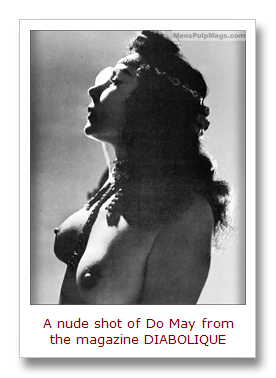 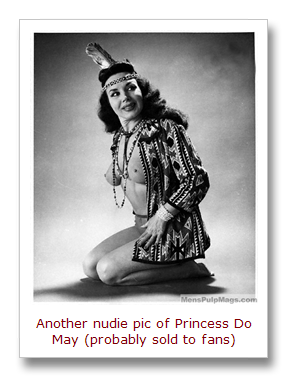 I will say I am skeptical that Doug was a reliable source of information or was quite the doting husband makes himself out to be in the REAL story. And, at least some of what he said in that piece stretched the truth or left it in the dust. I found a 1954 newspaper article about Do May and Doug in which he apparently told the reporter they met at a night club he owned in Louisville, Kentucky. Moreover, in that newsclip, he sounds like a bit of a jerk. He seems to take all the credit for Do May’s success and brags that “Without me, she’s dead.”

I realize some people feel Do May’s act perpetuated stereotypical images of Native Americans. And, some can’t view the art of Burlesque as anything but another example of the exploitation of women.

Yeah, yeah…I get it. But, like Bettie Page, Princess Do May sure was one beautiful, unique and intriguing lady.

I couldn’t find any articles about what happened to her and Bonde after the early 1960s. In my imagination, she eventually dumped Doug, jumped on an Indian pony and rode to some reservation, where she married the wealthy leader of a tribe that has casinos and lived happily, in high style, ever after. 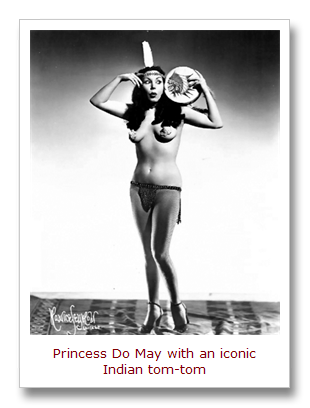 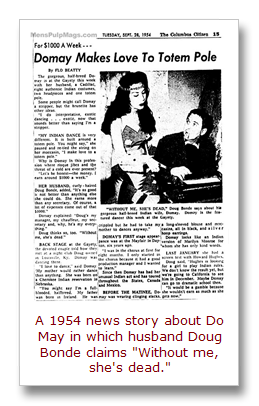 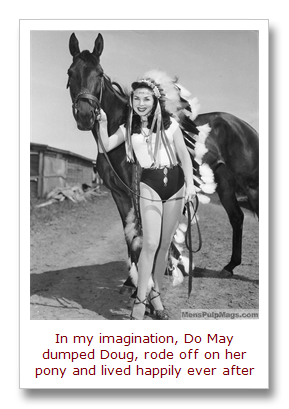