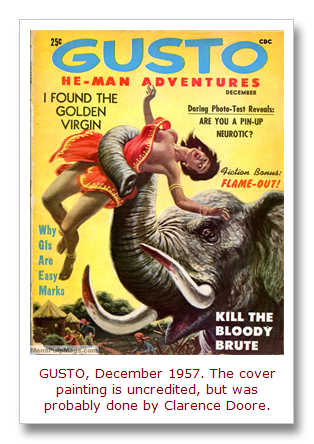 That was one of several comics and magazine publishing companies founded by Everett M. “Busy” Arnold (1899-1974).

Starting in the 1930s, Arnold was a pioneer in the realm of newspaper comics and comic books.

In the 1940s and early 1950s, his Quality Comics company published many notable comics titles. Among the most famous were Will Eisner’s The Spirit and Bill Ward’s sexy Torchy comics.

In 1954, the hysteria created by Dr. Fredric Wertham’s book Seduction of the Innocent and the resulting censorship guidelines in the puritanical “Comics Code” killed off many previously successful comics, including several of Arnold’s best sellers.

The Comics Code essentially banned violence and any hint of sexuality in comic books. This squelched many popular horror, suspense and mystery comics — and led several major publishers of comics to move into the men’s adventure magazine market.

Among them were busy Arnold, Martin Goodman and Stanley Morse. 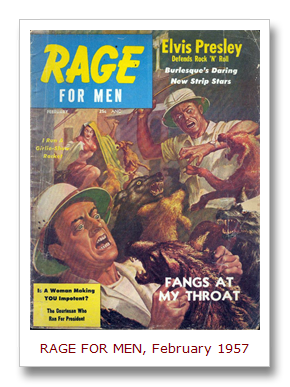 Arnold sold his comics properties to DC Comics in 1956 and founded Arnold Magazines, Inc. Through that company, he published various types of adult periodicals, including “true crime” and detective magazines, girlie photo and humor magazines and two men’s pulp mags: RAGE FOR MEN and GUSTO.

Another of Busy’s magazine companies, Natlus, Inc., published the men’s adventure magazines MAN’S PERIL, RAGE (a second incarnation of RAGE FOR MEN) and WILD (a.k.a. WILD FOR MEN).

GUSTO is one of several Arnold magazines that are now relatively rare and often pricey (when you can find them). Only three issues of GUSTO were ever published, dated October and December of 1957 and February 1958.

The cover paintings of all three issues are uncredited, but were probably done by Clarence Doore. Interior illustrations include some rare men’s adventure mag illos by Matt Baker, a pioneering African American illustration artist who is best known for his comic book art. 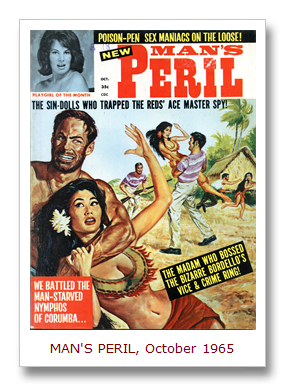 A key reason for GUSTO’s short life span was another form of censorship that Busy Arnold faced.

By today’s standards, the stories and cheesecake photos in GUSTO might be deemed “racy” at most.

But in 1957, the U.S. Postal Service decided that GUSTO’s contents were “dominated by material of an obscene, lewd, lascivious, indecent or filthy nature” and thus “are nonmailable matter and are not entitled to entry into the mails as second-class matter.”

A second-class mailing permit allowed a publisher to use low postage rates for a magazine. Without that, it was financially impractical to mail a magazine to subscribers.

Ad revenues were an important supplement for men’s adventure magazines, but not a main source of income like they were for the slick, high end men’s magazines like Playboy. Men’s pulp mags generally needed both newsstand sales and subscriptions to stay in business for more than a few issues.

Typically, if the second class mailing permit for a men’s pulp magazine was denied or revoked by the Postal Service, the publisher would stop publishing it. That’s what happened to GUSTO.

The rationale the Postal Service used to deny a second-class mail permit to GUSTO is summarized in a USPS hearing report issued in November 1957. It provides a fascinating glimpse into the prudish “moral standards” of the Fifties. 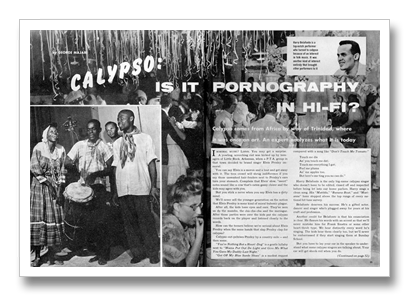 For example, one of the articles in the October 1957 issue of GUSTO that Postal Service officials viewed as “obscene” is about the lyrics in Calypso music.

The article is a somewhat tongue-in-cheek exposé about a “shocking” fact: some Calypso music lyrics are even more sexually suggestive than those in the rock ‘n’ roll music that Elvis Presley sang!

The title of the story is a classic example of the sensationalistic headline writing that is typical in men’s adventure magazines: “CALYPSO: IS IT PORNOGRAPHY IN HI-FI?”

The story itself is a significantly less sensationalistic than the title suggests.

Yet the diligent bureaucrat who investigated GUSTO for the Postal Service decided that this story violated USPS obscenity regulations.

Why? Because it quoted some of the sexually suggestive lyrics it was discussing (duh!), like the chorus from the popular Calypso classic “The Big Bamboo”:

Yeah, sure, those lyrics are “sexually suggestive,” in a witty and humorous way.

But was GUSTO’s article about Calypso music really “obscene, lewd, lascivious, indecent or filthy” as the Postal Service report concluded?

It is, however, an interesting cultural artifact, especially for fans of vintage Calypso music and the history of censorship in America (like me).

You can check it out for yourself by buying a copy of the WEASELS RIPPED MY FLESH! anthology.

It’s one of the classic men’s adventure magazine stories included in that book.

In an upcoming post here we’ll take a closer look at the Postal Service report about Gusto and at some of the other stories and photos from Gusto that the USPS report deemed to be “obscene.”

In the meantime, make yourself a rum punch, mon.

Sit back and relax, imagine yourself on some beautiful Caribbean beach and click on the video at left to hear a classic 1950s recording of “The Big Bamboo.”