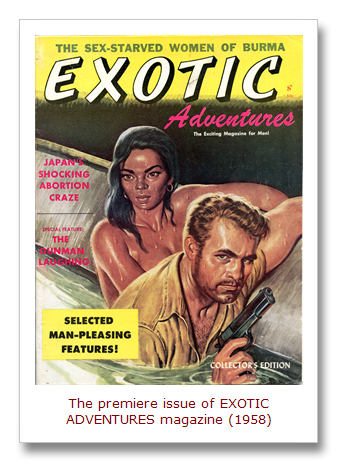 Depending on how you categorize certain vintage magazines, roughly 150 different men’s adventure magazines were published during the 1950s, 1960s and 1970s.

Categorization can be difficult for various reasons.

One is that certain vintage men’s magazines — such as Exotic Adventures — had aspects of both the pulpy adventure-style genre and the men’s girlie “slicks”, or bachelor magazines.

Exotic Adventures was a short-lived magazine published on slick paper, rather than on the newsprint pulp paper used for most of the classic men’s adventure mags.

Also, unlike the cheesecake photos in the typical men’s adventure pulp magazines, which rarely showed real nudity, the photos of the “models”  in Exotic Adventures were Playboy-like nude shots.

However, based on its name and cover paintings, as well the types of stories and the ads inside, I think Exotic Adventures fits best in the men’s adventure magazine category.

Only six issues of Exotic Adventures were published in 1958 and 1959 by an obscure New York company named Gladiator Publications, Inc. (I have found no evidence that this company published any other magazines, so it could have been a sub of some larger publishing house.) 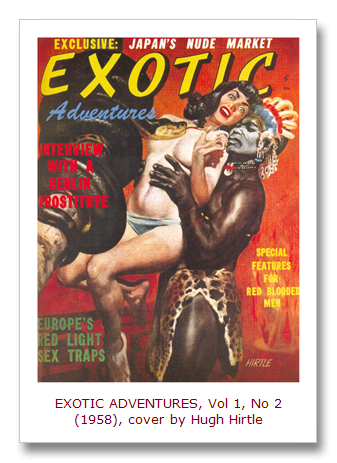 Today, copies of Exotic Adventures are hard to find.

They also tend to be pricey. I recently saw one listed for $80 on David T. Alexander’s great vintage magazine and comics website and one on AbeBooks.com for $275.

The cool exotic action cover painting on the first issue is uncredited.

The wild cover painting on the second issue, with it’s unsubtle racist overtones, is by the talented illustrator Hugh Hirtle.

In both issues, almost half of the “stories” are nude photo spreads.

But there is one notable piece of fiction in the premiere issue: a classic Fifties juvenile delinquent short story by Stuart Friedman titled “Tight Pants.”

Friedman was a prolific contributor to various types of vintage pulp magazines in the 1940s and 1950s, writing for everything from Doc Savage and Western Aces to Dime Mystery and Manhunt.

The second issue of Exotic Adventures includes one of the few stories written for men’s adventure magazines by the legendary science fiction author Harlan Ellison — “The Island of Tyooah.”

It’s one of two “lost” Harlan Ellison stories that he has given me permission to offer as downloadable reprints.

In the next post on this blog, we’ll do some browsing inside the first two issues of Exotic Adventures, which (according to the cover blurbs) offer “SELECTED MAN-PLEASING FEATURES” and “SPECIAL FEATURES FOR RED BLOODED MEN.” 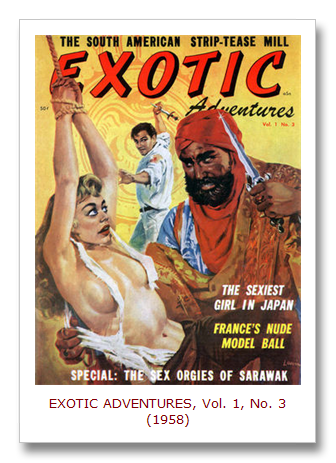 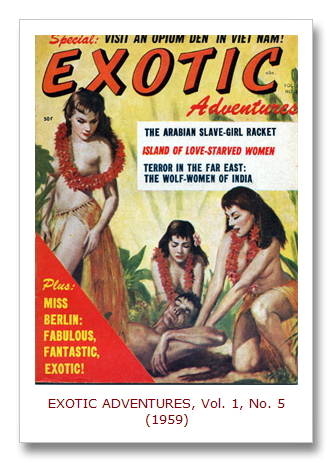 CULT MAGAZINES: A to Z – a highly recommended new book…