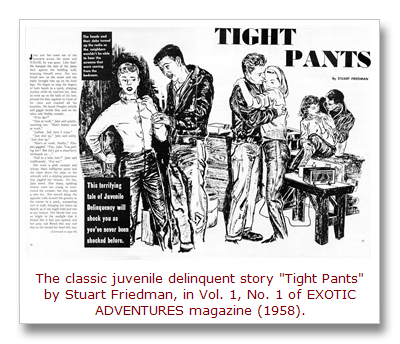 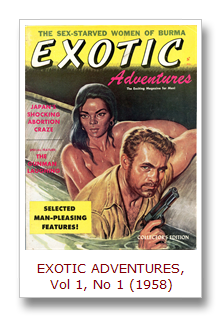 But, unlike most men’s adventure magazines of that decade, Exotic Adventures was printed entirely on slick paper. And, the cheesecake photo spreads in the six issues that were published in 1958 and 1959 have Playboy-style nude shots. Most other men’s adventure-style mags didn’t start showing real nudity until the late 1960s.

The most notable story in Vol. 1, No. 1 of Exotic Adventures, is a classic juvenile delinquent story by veteran pulp writer Stuart Friedman, titled “Tight Pants.” Stories about violent teenage “juvies” were very popular in the Fifties in magazines, books, movies and TV shows. (In the Sixties, they were replaced by doped-up Hippies; in the Seventies by vicious motorcycle gangs.)

Freidman was a prolific pulp writer who died in 1993. He contributed many stories to vintage pulp magazines in the 1940s, such as Mammoth Mystery, 10-Story Detective Magazine, Crack Detective, Big-Book Western Magazine, Dare-Devil Aces, Western Aces and Jungle Stories. In the 1950s and 1960s he wrote for the newer wave of detective mags, like Manhunt, and for the postwar men’s magazines. He also wrote a number of pulpy paperback novels. 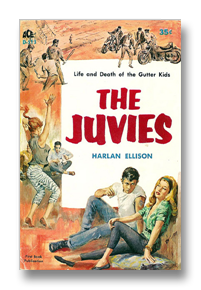 The second issue of Exotic Adventures includes a rare find: one of the few stories by the legendary writer Harlan Ellison that was published in a men’s adventure magazine.

Today, Ellison is most widely known for his science fiction stories and screenplays. But in the late Fifties, during the same period when he started writing for science fiction magazines, he also wrote stories for other types of magazines.

Quite a few were “juvie” stories like Friedman’s (but hipper). Most of those stories were originally published in detective and “true crime” pulp mags and were later collected in Ellison’s early books, including one aptly titled The Juvies (1961).

Ellison’s story in Vol. 1, No. 2 of Exotic Adventures is not a “juvie.” Nor is it science fiction. It’s an exotic adventure story with supernatural overtones and some sexy bits called “The Island of Tyooah” (misnamed as “Island of Tyooha” on the title page).

This story has never been included in any of the books collecting Ellison’s stories. However, fortunately for me — and readers of this blog — Harlan gave me permission to offer online reprints through Payloadz.com.

“The Island of Tyooah” is fun to read and has elements of Ellison’s famous sci-fi short stories, including well-crafted prose and one of his trademark final twists in the last few paragraphs. It also has a gorgeous illustration depicting a risqué scene from the story. 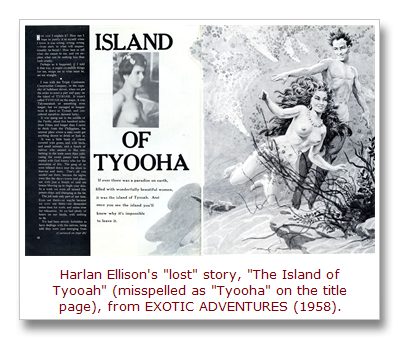 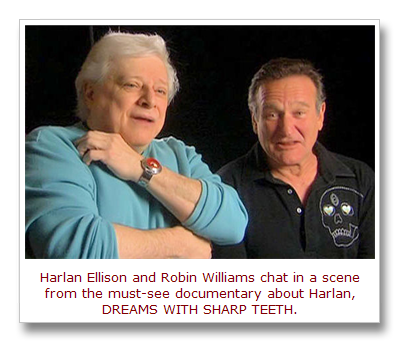 There are some other stories in the first two issues of Exotic Adventures that focus exotic foreign women. One is “Lost Village in the Burma Jungle,” a World War II yarn in which some lucky American soldiers stumble on a village “jam-packed with sex-starved Burmese girls.” The other is a photo feature about the “Savage Women Wrestlers” of the Choco tribe in the Panamanian jungle. Photos of women wrestling are often viewed as being sexy. I’ll let you decide if you think these are. 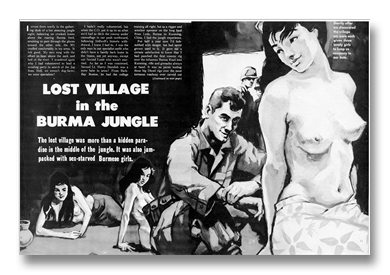 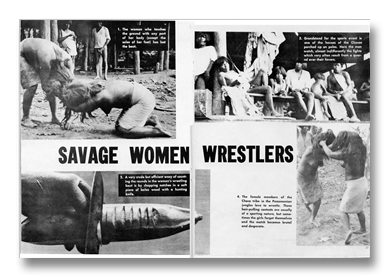 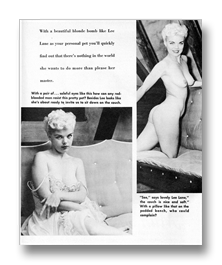 Personally, I think the models in the cheesecake spreads in Exotic Adventures are a bit more appealing than the Choco wrestlers.

However, as in many vintage men’s magazines, the photos are accompanied by some truly cringeworthy text and captions that are either are incredibly inane or incredibly sexist. Or both.

For example, the headline for photo spread featuring the “beautiful blonde bomb” Lee Lane, in Vol. 1, No. 1, is titled “Man’s Best Friend” and the captions and text have a gag-inducing pet theme.

Of course, no vintage men’s adventure magazine would be complete without ads that also seem sexist and outdated.

Below are a few of my favorites examples from the first issue of Exotic Adventures.

If you click on these ads to see them enlarged and read the text, I think you’ll get a few laughs. (Or maybe see some things you wish you could order.) 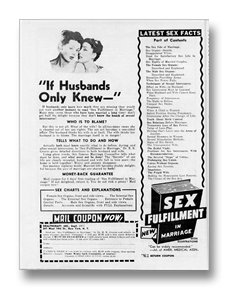 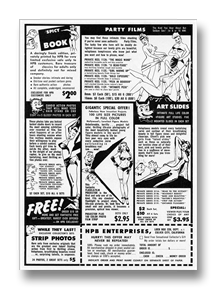