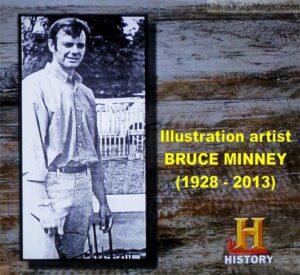 On August 5, 2013, the great illustration artist Bruce Minney passed away at age 84, about two months after suffering a major stroke.

If you’re a regular reader of this blog, you know that Bruce was one of the best and most prolific of the many talented illustration artists who created cover and interior paintings for men’s adventure magazines published in the 1950s, 1960s and 1970s.

He also did many paperback book cover paintings throughout those decades and into the 1990s.

Though I never met Bruce in person, I felt like I knew him.

I’ve featured his work in numerous posts on this blog. Some of them showed examples of the original Bruce Minney paintings that now reside in the mind-blowing art collection of my friend Rich Oberg, who I call “the Dean of Men’s Adventure Magazines.”

I later had the pleasure and honor of doing a phone interview with Bruce that I posted here in 2011. 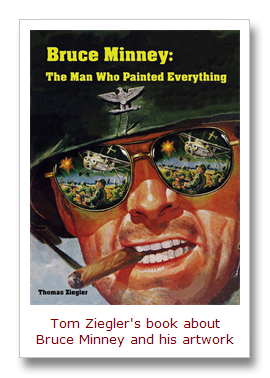 And, the following summer, Bruce son-in-law and biographer Tom Ziegler (married to Bruce’s daughter, Carole) did a series of guest posts for MensPulpMags.com with excerpts from his lushly-illustrated, must-have book BRUCE MINNEY: THE MAN WHO PAINTED EVERYTHING.

Ironically, Bruce Minney died just hours before the first airing of an episode of the History Channel’s “American Pickers” show that featured some of his original men’s adventure magazine paintings.

Although Bruce didn’t get a chance to see it, that may have been for the best.

The hosts of the series, antique “pickers” Mike Wolfe and Frank Fritz, and the female clerk at their store in Tennessee, made some nudge-nudge-wink-wink comments about the paintings that Bruce may have found a bit annoying. (I know Tom and I did.)

If you saw the episode or watch it online on the show’s website, you’ll know what I mean.

The “American Pickers” folks clearly know a lot about various types of antiques. But they do not appear to be very knowledgeable or appreciative fans of men’s adventure magazine art and seemed unaware of the amazing breadth and quality of Bruce’s body of work.

Nonetheless, for me, it was fascinating to see the original Minney paintings that were shown and cool to see any TV show do something about vintage men’s adventure magazines.

The Minney paintings shown in the “Pickers” episode had been hidden away for decades in a cluttered storage building owned a Pennsylvania antique dealer and his wife. They were identified simply as Les and Loretta.

Les explained that he bought the paintings directly from Bruce in a visit he made to the Minneys’ home in New Jersey. He recalled it being 1979. Tom told me it was probably in 1981. As Bruce told me in my interview with him, and as Tom recounted in his book, that was the year when Bruce decided to move his family back to California, where he grew up. 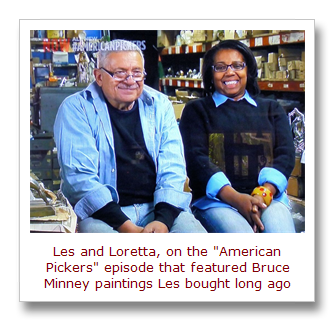 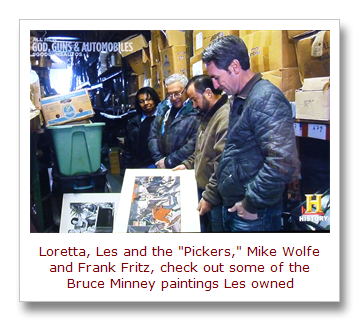 By then, Bruce had hundreds of his men’s adventure mag paintings on illustration board stored in their New Jersey home. At that time, unlike today, there was no significant market for original pulp illustration art in galleries or online sites like Heritage Auctions. So, Bruce decided to sell them off cheaply and even threw many away, to avoid having to haul them across the country when he moved.

Les said he bought about 40 men’s adventure paintings from Bruce. It’s not clear how many he still had. The video in the episode provides glimpses of what seemed to be about a dozen. 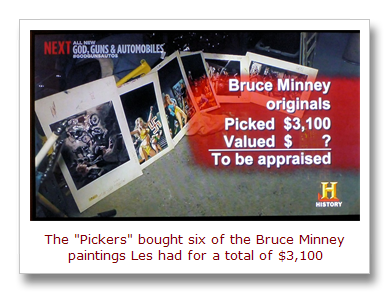 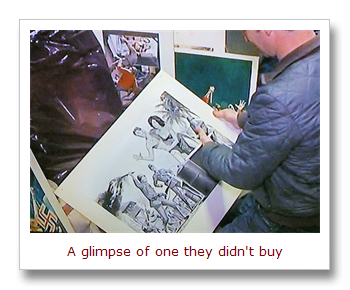 Two of those cover paintings were iconic “sweat magazine” images of scantily-clad damsels being menaced by evil Nazis. One was used the cover of the July 1967 issue of WORLD OF MEN, the other appeared on the March 1971 issue. 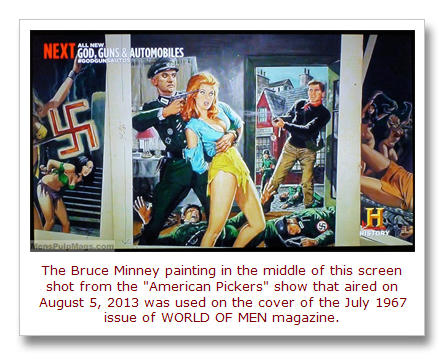 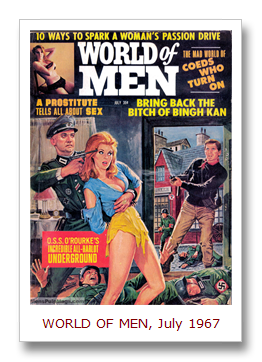 In BRUCE MINNEY: THE MAN WHO PAINTED EVERYTHING, Tom Ziegler documented at least thirty WORLD OF MEN covers that Bruce did during the first eight years of that magazine’s ten-year run (1963 to 1973).

He noted that the March 1971 issue was the last one Bruce did for the magazine. 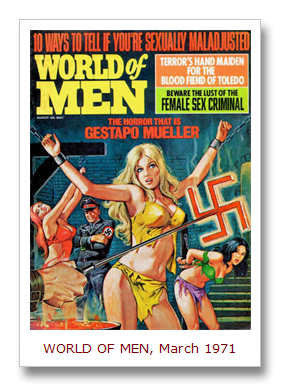 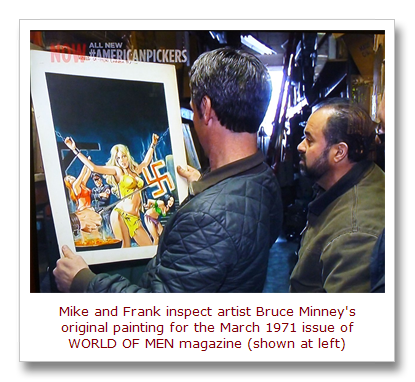 The third Minney cover painting the Pickers bought was a classic ‘70s Satanist cult scene, complete with a human sacrifice in the making.

It appeared on the August 1971 issue of MAN’S STORY, and is one of only three cover paintings I know of that Bruce did for that long-running men’s pulp mag. (It ran from 1960 to 1975.) 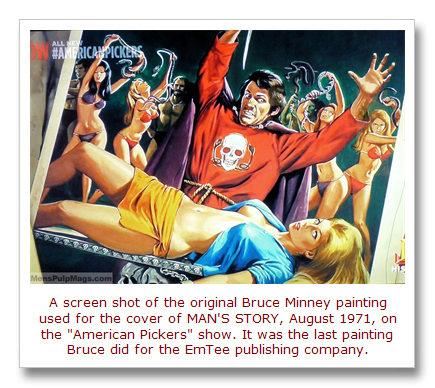 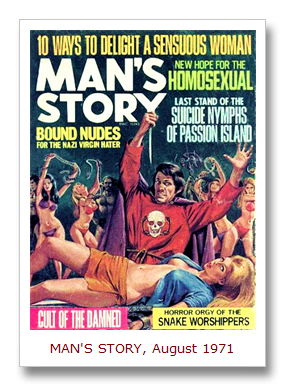 WORLD OF MEN and MAN’S STORY were both published by the Reese and EmTee companies, owned by B.R. “Bud” Ampolsk and Maurice Rosenfield (spelled Rosenfeld in some sources).

The three interior paintings the Pickers bought were all used in issues of STAG, one of the flagship men’s adventure magazines published by subsidiaries of Martin Goodman’s legendary Magazine Management company from 1949 until 1978 (after which it it morphed completely into a hardcore stroke mag).

One was a World War II action scene that showed some “Joy Girls” luring Japanese soldiers into an ambush. It was used for a story in the July 1970 issue of STAG. 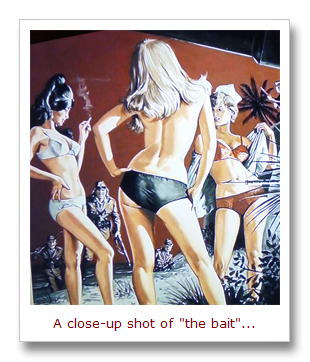 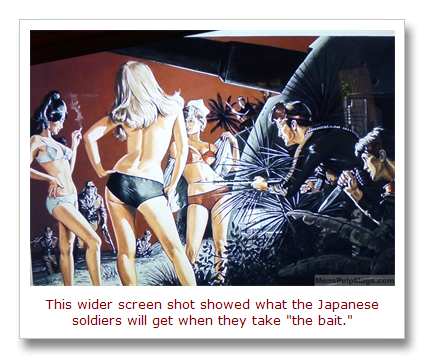 The second STAG piece was a truly awesome “animal attack” illustration, showing a herd of “killer moose” running through a town. It was used for a story in the April 1971 of STAG (flipped horizontally when published).

Like artists did in many men’s adventure magazine illustrations, Bruce found a way to include a few barely-clothed babes. 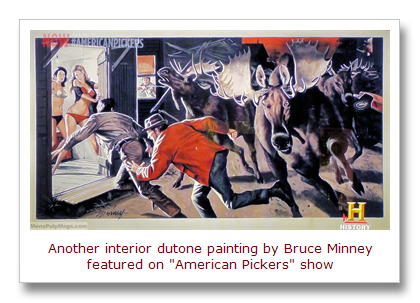 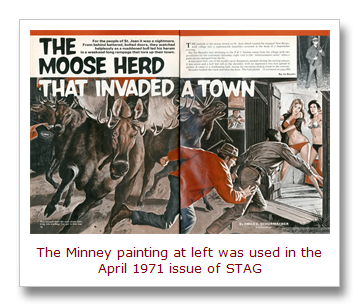 The third STAG illo featured a Hells Angels style motorcycle gang. It was first used for a story in the January 1973 issue and later reused for another biker yarn in a different issue. 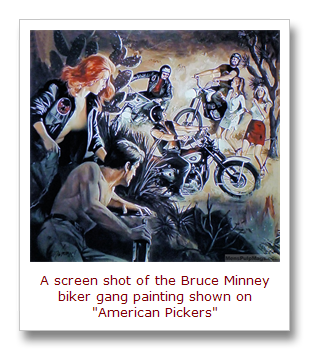 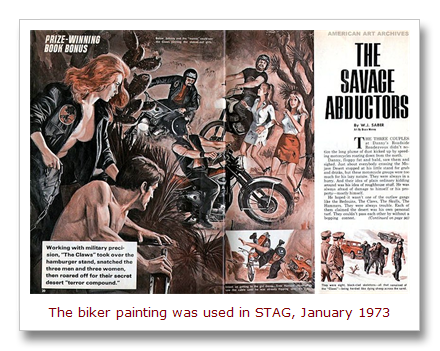 Mike and Frank negotiated Les down to a total price of $3,100 for the six Minney paintings they chose, which seemed like a good deal to me.

In the final part of the episode, those paintings were appraised by a guy from a local comic book shop. A lot of people who are into comics are also fans of men’s adventure magazines and the appraiser did seem to know more about the genre and Bruce Minney than Mike and Frank — though not a lot more.

The appraiser did note, correctly, that Bruce Minney was a very popular and prolific illustration artist. He estimated that the Minney interior paintings the Pickers bought were worth about $550 each and the covers were worth $1,000 to $2,000 or so. 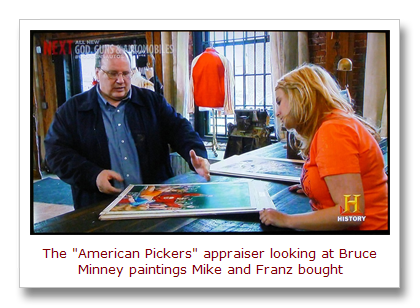 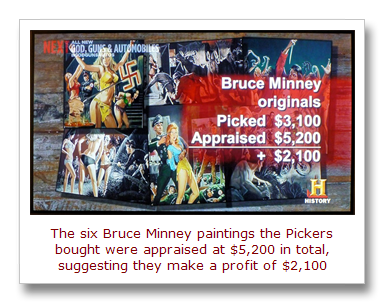 At the end of the show, the appraiser concluded that all six Minney paintings were worth about $5,200, which suggested that Mike and Frank would make a nice profit.

I’d say that was a safe conclusion. 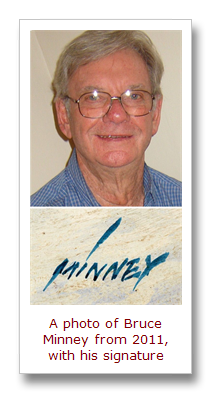 In fact, I’d guess those paintings may be worth significantly more than he estimated given Bruce’s recent death, the publicity from the show and the fact that awareness and appreciation of Bruce’s illustration art had already been steadily growing in recent years.

Bruce has not yet gained the level of recognition given to some of the artists who once worked for men’s adventure magazines, such as Mort Kunstler, James Bama or Basil Gogos.

But he certainly deserves it — and I think it will happen eventually.

When I watched the “American Pickers” episode the evening of August 5th, I knew Bruce had passed away earlier in the day.

Tom Ziegler had posted that sad news on his Bruce Minney Facebook page.

It made watching the show quite poignant. The fact that it was the first TV show I had seen that featured any men’s adventure magazine artwork also made it special to me.

But it wasn’t really a fitting homage to Bruce.

Tom’s book about him is.

And, if you are a fan of vintage men’s adventure magazines or illustration art in general or Bruce in particular, it’s a must-have.

R.I.P. Bruce… Thanks for all the great artwork. It’s an amazing cultural legacy that will continue to live on long on.

Coming up: a look at the Bruce Minney paintings Mike and Frank decided not to buy (which they may now regret)…