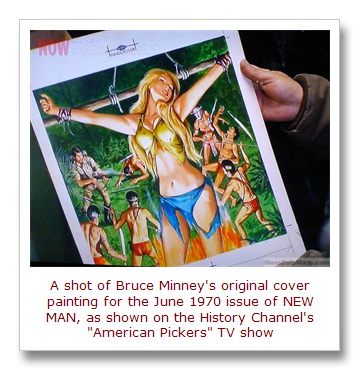 On the evening of August 5th, 2013, the History Channel’s “American Pickers” TV series aired an episode of particular interest to fans of men’s pulp adventure magazines.

In it, the show’s stars, Mike Wolfe and Frank Fritz, stumbled upon a treasure trove of original paintings by artist Bruce Minney that had been hidden away in a storage building in Pennsylvania for over 30 years.

The building was owned by a man and woman identified simply as Les and Loretta. Les told the Pickers he’d bought the paintings directly from Bruce, around the time when Bruce had decided to sell off his men’s adventure paintings prior to moving his family from New Jersey to California in 1981.

Sadly and ironically, Bruce passed away the same day this episode debuted.

Of course, Mike and Franz couldn’t have predicted that when the episode was shot. 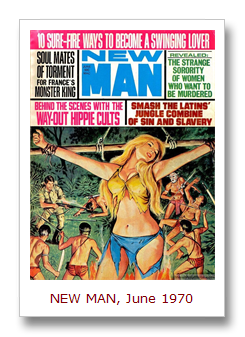 And, based on things they said, my impression was that they didn’t really know who Bruce was and were unaware of the fact that he was still alive when they found the paintings Les and Loretta owned.

They clearly didn’t know that Bruce was one of the greatest of the many great illustration artists who did artwork for men’s adventure mags and paperback books.

So, the Pickers only bought six of the Minney paintings Les had. I provided a look at those in my previous post here.

This post focuses on the paintings that were glimpsed on the show but passed up by the Pickers.

As noted near the end of that episode (which you can now watch online), men’s adventure cover paintings usually bring much higher prices than interior artwork. And, those showing scantily-clad damsels being tormented by Nazis or other evil fiends are among the most sought after.

Given that, I was especially amazed that the Pickers passed on buying the original Bruce Minney painting used for the cover of the June 1970 issue of NEW MAN magazine.

It’s a classic exotic bondage-and-torture scene in which a scantily-clad damsel has been hung up, crucifixion-style, by some South American natives. (Luckily a guy with a rifle is coming to rescue her in the background.)

The Pickers also passed on the awesome cover painting Bruce created for the November 1963 issue of REAL ADVENTURE. 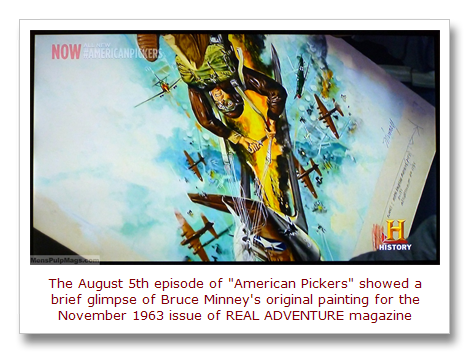 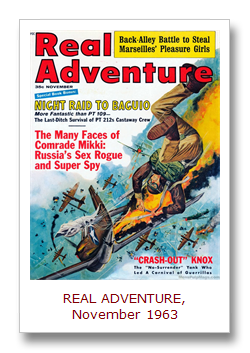 And, the one from REAL ADVENTURE is a doozy, showing an American flyboy falling head-first through the midst of a World War II aerial battle.

In his excellent book, BRUCE MINNEY: THE MAN WHO PAINTED EVERYTHING, author Tom Ziegler included Bruce’s comments about many of the hundreds of men’s adventure paintings he created.

“This was really a hard job. For one thing I had to pose him [i.e., the male model he photographed for reference] sideways on the floor with his legs in the air. Then I had to figure out how the lines from the parachute got stuck on the tail of the airplane. Then you have the airplanes flying underneath. Holy Crap. I remember that job – not with fondness, but it turned out pretty well. I never knew the title of the stories. I knew the magazine and a one-paragraph summary of the situation.” 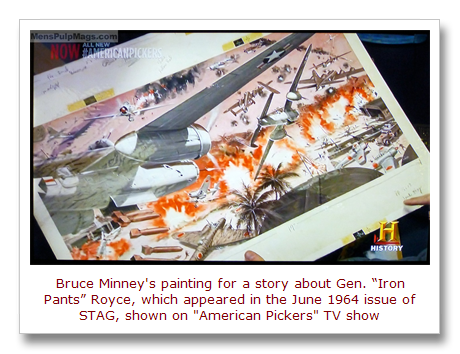 The “American Pickers” guys also passed up buying two other cool Minney battle scene paintings that are featured in Tom’s book about Bruce.

One is a superb interior duotone Bruce created for a story about Gen. “Iron Pants” Royce, which appeared in the June 1964 issue of STAG.

In his book, Tom explains that in 1963, Bruce bought a Bausch and Lomb projector that had a significant impact on the types of scenes he was able to create.

It allowed him to project reference photos he collected of planes and various other things onto his illustration the board in the size needed to fit the scene he was painting.

“The projector was invaluable,” Bruce told Tom, “and allowed me to work a lot faster.” 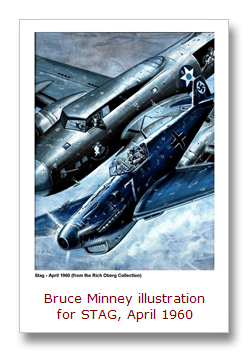 As noted by Tom in his book, you can see the difference when you compare the 1964 STAG illustration with the pre-projector one Bruce did for a war story in the April 1960 issue of STAG (which now resides in the Rich Oberg Collection).

The scene is the 1960 illustration is ‘simpler.’

There are only two airplanes against a fairly uncomplicated background.

Both planes are sharply rendered and Tom said Bruce spent a lot of time doing the reflections on the wings.

“The 1964 illustration done after Bruce got the projector is wild; bombs dropping, explosions, at least 16 planes in the air or on the ground. Very little attention is paid to the metallic surfaces of the planes. There is simply too much else going on.”

For some reason, the Pickers also decided not to buy a great “Good Girl Art” illo by Minney, featuring a nude with her naughty bits hidden by a strategically placed fern.

They also took a pass on a great, gory bear attack illustration by Bruce that Les and Loretta owned. That one appeared in the May 1971 issue of MALE. 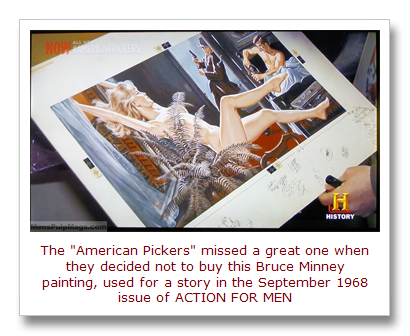 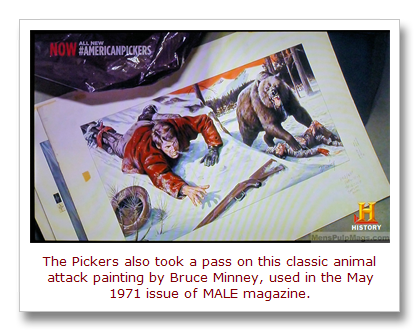 There was also a passing shot of an intriguing Minney painting that shows a guy and gal in what appears to be a bathtub being attacked by Japanese soldiers.

Neither Tom nor I have figured out what that one was used for yet. But it looked very cool on TV.

If you happen to know what magazine it was used in, please shoot me an email or drop by the Men’s Adventure Magazines Facebook Group and let us know. 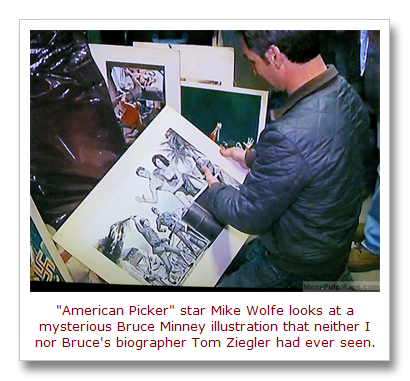 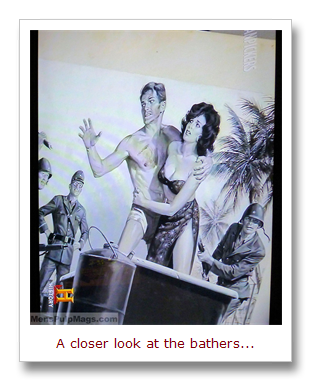 I’m not sure why the Pickers didn’t buy all of these other Minney paintings when they had the chance. They probably should have.

I suspect that now, since they were featured on national television and Bruce has passed away, somebody else has.