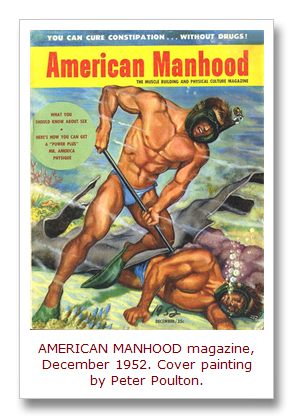 I am a big fan of the bodybuilding and fitness guru Joe Weider.

But not because I’m into bodybuilding (or fitness, as my wife frequently reminds me).

I became a big fan of Joe by reading the men’s adventure magazines he created, edited and published with his brother Ben Weider in the 1950s and 1960s.

Of course, those magazines were just a small part of the amazing business empire the Weider brothers built.

Joe and Ben Weider helped create the modern bodybuilding and fitness industry and made millions from their bodybuilding contests, courses, equipment and nutritional supplements.

Ads for “Weider System” products and publications, which often featured a photo of Joe in his bodybuilding heyday, are as common in vintage men’s magazines and comic books as ads for rival bodybuilder Charles Atlas.

The Weider brothers played a major role in shaping the bodybuilding and fitness magazine genre by publishing a long list of popular muscle mags, starting in 1936 with the groundbreaking magazine Your Physique.

In the 1950s and 1960s, Joe and Ben also published men’s pulp adventure mags, like Fury, Outdoor Adventures and Safari, and men’s bachelor mags, such as Jem and Monsier. 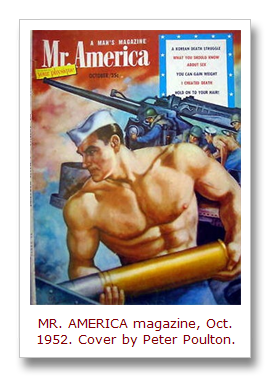 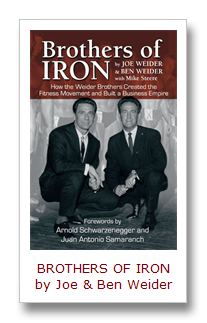 In the fascinating joint autobiography written by Joe and Ben, Brothers of Iron: Building the Weider Empire (2006), Joe Weider explained how these hybrid periodicals originated.

He said that by the early Fifties their first popular magazine, Your Physique, seemed “too French-sounding and soft for U.S. readers.”

One of the recent publishing trends that got Joe’s attention was the growing number of men’s adventure pulp mags.

He decided to remake Your Physique into a men’s pulp magazine, with “my own original mix of a muscle magazine and men’s adventure.”

Joe first tried this mix in the magazine Mr. America in mid-1952. 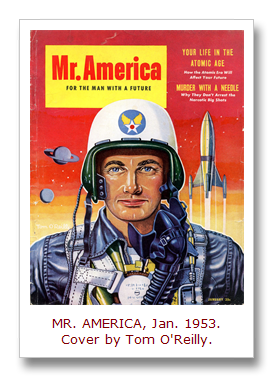 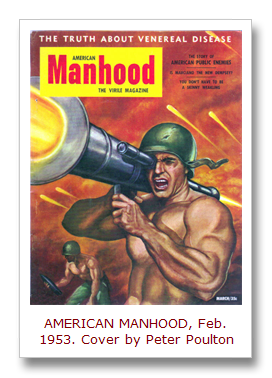 The men’s pulp version of Mr. America ceased publication in the fall of 1953, although the Weiders later revived the title as a pure bodybuilding magazine heavily associated with the Mr. America contests they sponsored. (This was a forerunner of their Mr. Olympia contest, which helped make Arnold Schwarzenegger famous.)

Joe doesn’t mention the Weider magazine American Manhood in Brothers of Iron, but it was also clearly an attempt to create a hybrid periodical that combined elements of a bodybuilding magazine and a men’s pulp mag.

There were some notable differences between the two magazines. 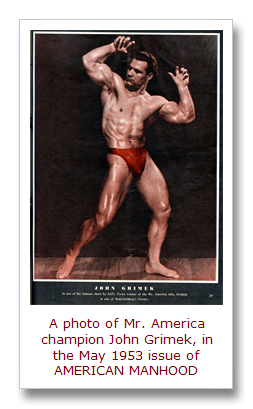 Mr. America was more men’s pulp mag than muscle mag, especially when Joe revamped and relaunched it (again) in January of 1953.

In that 1953 “premiere issue” (which I featured here in a previous post), the contents are the common elements found most men’s pulp mags in the 1950s: sensationalized news articles and action/adventure stories, spiced up with semi-nude female cheesecake photos. 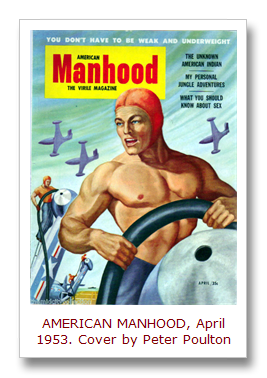 Some stories about bodybuilding did appear in Mr. America, but they did not predominate.

In contrast, American Manhood was more of a muscle mag than a men’s pulp mag.

Most of the articles were about bodybuilding, famous or up-and-coming bodybuilders, and health and fitness topics. And, instead of female cheesecake pics, most of the photo spreads featured beefcake shots of heavily-muscled men.

In fact, when you look at the covers of American Manhood and the photo spreads inside, it’s pretty clear that it would appeal more to hardcore bodybuilders and gay men than the hetero guys who formed the base readership of vintage men’s adventure magazines.

That didn’t bother Joe one bit. Which is one of the other reasons why I am a fan of Joe Weider.

He was way ahead of his time in his attitude toward homosexuality — in addition to being ahead of his time in terms of race and gender politics. (Joe and Ben allowed and encouraged African Americans, Hispanics and women in their bodybuilding competitions before such open-mindedness was widely accepted.)

Joe knew, of course, that some bodybuilders and fans of bodybuilding were gay.

He knew that a magazine like American Manhood had gay appeal. In fact, several other Weider magazines were much more blatantly homoerotic, such as Adonis and Body Beautiful. 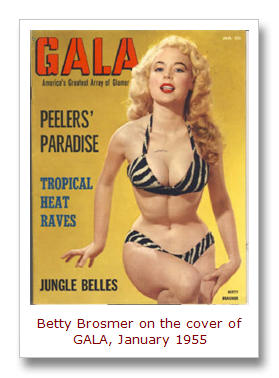 “I had no hangups in that direction,” he wrote in Brothers of Iron, “I’ve never understood why guys get all shook up about homosexuality. Maybe they think it rubs off. Maybe they feel threatened because they’re not so sure about themselves.”

However, like the men’s pulp incarnation of Mr. America, American Manhood magazine didn’t appeal to a large enough straight or gay audience to last long.

From what I can tell, only about 12 issues of American Manhood were published, between late 1952 and 1954.

By the way, in case you wondered, Joe Weider is hetero.

His wife of many decades is the famous former pin-up model Betty Brosmer, who eventually became a fitness guru herself after marrying Joe in 1961.

As I write this, Joe and Betty are still alive and kicking. Ben died in 2008.

Also BTW, if you read the captions above you may have noticed that all of the excellent and distinctive cover paintings used for American Manhood were done by Peter Poulton, who was best known for his science fiction and fantasy mag artwork.

In an upcoming post, I’ll tell you more about Poulton and take a look at some of the stories that were published in American Manhood.