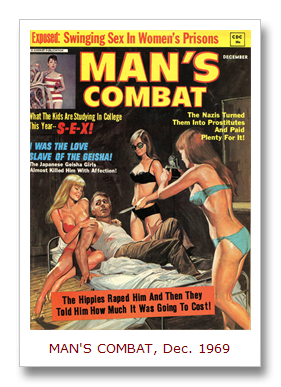 Although the men’s adventure magazines published in the 1950s, 1960s and early 1970s often claimed to feature “real stories,” most of their stories were pulp fantasy.

I note this because today’s post is about “love slave” stories in those magazines.

For the record, just like any sane person, I agree that a real-life situation in which someone is held against their will and forced to be a sex slave is horribly wrong.

Of course, that doesn’t mean I can’t chuckle at the campy “love slave” fantasy stories in old men’s pulp mags and admire the artwork used for them.

In some of these stories, men are held captive and ravished by evil — but gorgeous — women.

In other stories, women are the “love slaves.” Naturally, they are beautiful women and the evil men who hold them captive are ugly or otherwise abhorrent. Typically, in those stories, there are good-looking, manly heroes who help the damsels in distress escape.

One of my favorite examples of a love slave story that features a man as the “victim” is in the December 1969 issue of Man’s Combat. 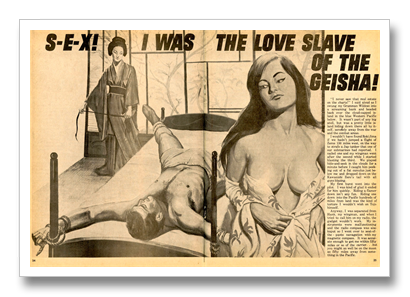 The title of the story spells it out for you. Literally. It’s:

This is a supposedly true story related by a former World War II American fighter pilot.

He tells us that during the war he was flying a mission in the South Pacific when his Grumman Wildcat was shot down by the Japs.

He survived, but was captured by evil (but gorgeous) Japanese geisha girls on “Roki Jima” island. (An island I don’t think you’ll find on any map.)

On the magazine’s contents page, the editor offered this enticing blurb about the poor pilot’s story: “They whipped him, tortured him, and almost loved him to death!”

The painting on the cover of that issue of Man’s Combat (shown above), goes with another yarn about a man held captive and ravished by evil (but gorgeous) women.

In that one, they are evil hippie chicks! (IN case you didn’t know, evil hippie chicks are as dangerous as evil geishas girls.) The story’s title is a men’s pulp mag classic: “The Hippies Raped Him And Then They Told Him How Much It Was Going to Cost!”

Unfortunately, the wild artwork for both of these stories in Man’s Combat is uncredited. So I don’t know who the artists were.

Below are a few other examples of “love slave” stories from vintage men’s adventure magazines, starting with: “Love Slave To The Priestess Of Torture,” which features a hot, uncredited illo. It’s from the February 1966 issue of Real Men. 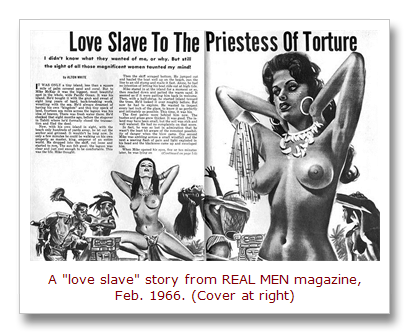 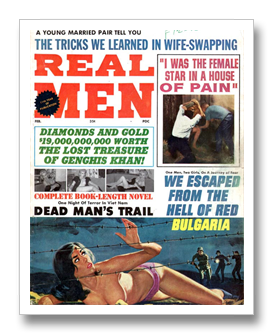 The November 1963 issue of the hard-to-find men’s pulp magazine Women in War features the story “REVOLT OF THE LOVE SLAVES.” (The cover blurb says this was “The nightmare the Nazis dreaded.”) 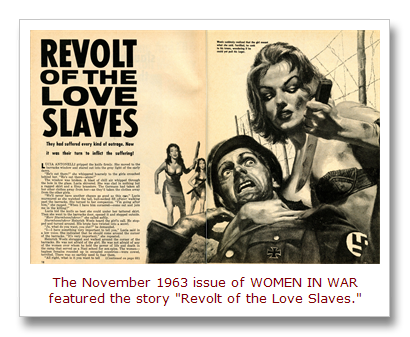 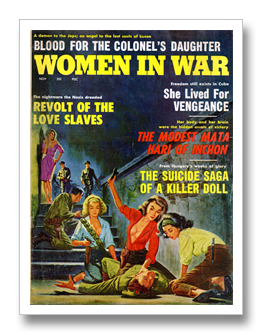 The cover painting used on that issue is also unsigned and uncredited. But I am fairly sure it’s the work of the great Wil Hulsey (often referred to as Will Hulsey), creator of the famed “Weasels Ripped My Flesh” cover painting. 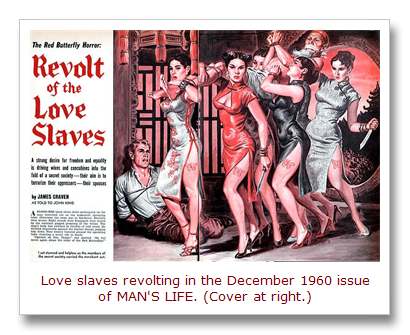 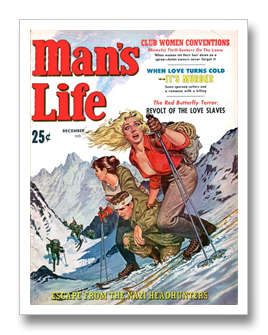 Speaking of Hulsey, I recently found out that he is still alive and living in California. I contacted him and asked if he’d do an interview with me. He declined, but I may try again in the future.

In the meantime, be careful out there and watch out for evil geishas and hippie chicks.