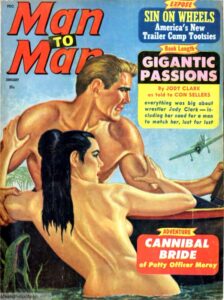 Recently, while putting away some old magazines I bought on eBay, I focused on one that sent me on a quest that lasted for several weeks — and is still ongoing.

MAN TO MAN was a pioneering men’s magazine that premiered in 1949. Its content was part girlie mag and part men’s adventure mag. Its covers primarily featured pinup model photos in the early and mid-1950s, then consistently used men’s adventure style cover paintings from 1958 to March 1965.

At that point, MAN TO MAN abandoned most adventure style stories and illustrations and became yet another PLAYBOY clone.

The next to last painted cover in the magazine’s run appeared on the January 1965 issue. It’s a real eyeball-grabber: a WWII scene dominated by the nude, muscular back of a beautiful “native girl.” 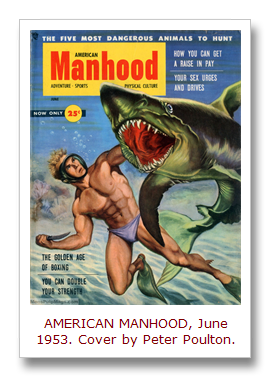 She’s gripping the arms of muscular guy who’s showing an almost equal expanse of exposed flesh, apparently right at the moment when they see a Japanese Zero swooping down at them, getting ready to shred their beautiful bodies with machine gun fire. There’s no signature on this awesome cover painting. There’s no artist credit given inside. And, though the style of the painting and the figures seemed naggingly familiar, I couldn’t quite place it.

So, I posted a scan of the cover in the Men’s Adventure Magazines Facebook group associated with this blog and asked if any of the many knowledgeable illustration art experts in the group could ID the artist.

“Bit of a wild guess, but Peter Poulton? I’ve only seen a couple of his covers, but there’s something about the male torso and head that reminds me of those. AMERICAN MANHOOD, June 1953, for example. I think Bob has a post on that magazine in MensPulpMags.com.”

Light dawned on Marblehead when Nick said that, and I looked up that issue of AMERICAN MANHOOD in my collection. Then I pulled out some more men’s adventure covers that I knew were done by Poulton, based on signatures or credits in the magazines.

AMERICAN MANHOOD magazine was an odd, short-lived hybrid that was part men’s adventure mag and part bodybuilder mag. All seven of the issues I know of feature images of bare-chested men who were as muscular as the photos of famous bodybuilders shown in some of the articles inside. And, all seven covers paintings were done by Peter Poulton.

The beefcake, bodybuilding aspects of AMERICAN MANHOOD reflect the fact that it was published Weider Publications Inc., the publishing company run by famed bodybuilder Joe Weider and his brother Ben Weider, the “Brothers of Iron.” 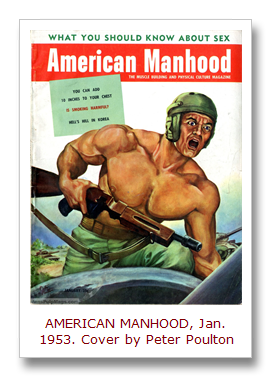 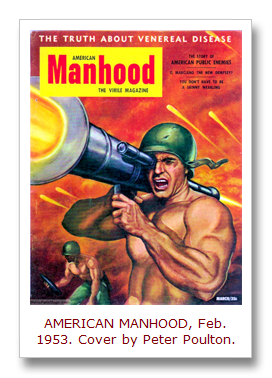 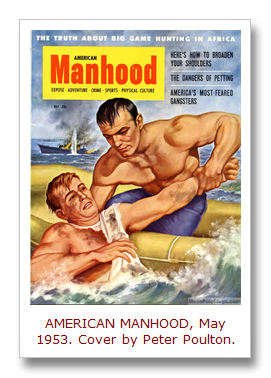 AMERICAN MANHOOD was an offshoot of the longer-running Weider magazine MR. AMERICA.

In 1952 and 1953, MR. AMERICA diverged from it’s usual bodybuilder photo covers and used painted covers for nine issues — some of which were done by Poulton — like these… 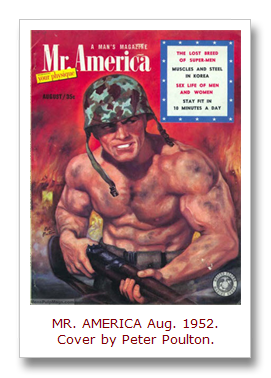 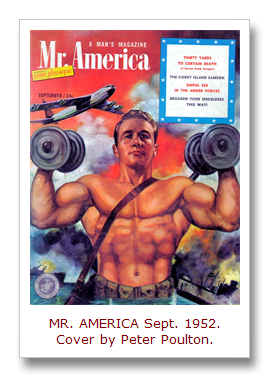 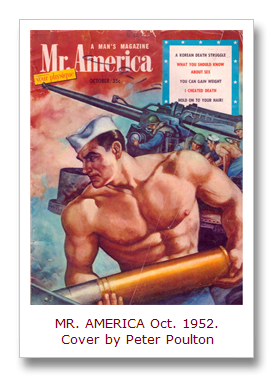 When I compared Poulton’s cover paintings for AMERICAN MANHOOD and MR. AMERICA to the one on the cover of the January 1965 issue of MAN TO MAN, it sure looked to me like Poulton did that MAN TO MAN cover.

Several other members of the Men’s Adventure Magazines Facebook group agreed. But none of us knew much about Poulton. 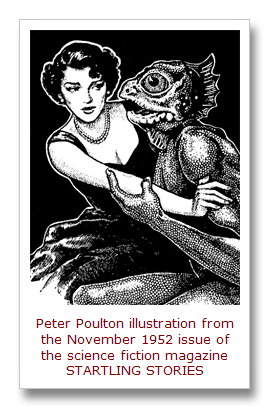 That made me want to find out more about him. Even if we were wrong about Poulton doing the MAN TO MAN cover, I was intrigued. Who was this mysterious guy who painted such lush beefcake (and maybe cheesecake) cover paintings? I did a quick Google search and found that, as is true of many pulp illustration artists who worked for men’s adventure magazines, there were no bios of Poulton online.

I did find a short one in a reference book I had in my library: Robert Weinberg’s BIOGRAPHICAL DICTIONARY OF SCIENCE FICTION AND FANTASY ARTISTS

POULTON, PETER (?) American artist. One of the many artists to enter the science fiction field during the boom years of the early 1950s, Poulton was one of the best. He used a sharp pen-and-ink style as opposed to the many artists who worked in grease pencil or wash during the period. For shading he used detailed cross-hatching and stipple work to produce the desired effect. In many ways, his work was very much in the style of Virgil Finlay. Although Poulton did not have the near photographic realism of Finlay, his art often expressed a lighter, more humorous touch. Poulton handled human figures well but also was not afraid to depict unusual aliens or strange machinery in his art. Although he was primarily an interior artist, he also painted several attractive covers for Future Science Fiction.

Armed with this info, I went online to try to track down some examples of Poulton’s science fiction illustrations. Initially, I only found a few examples. But the ones I found were mind-blowingly cool. 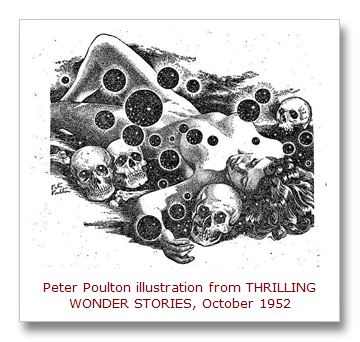 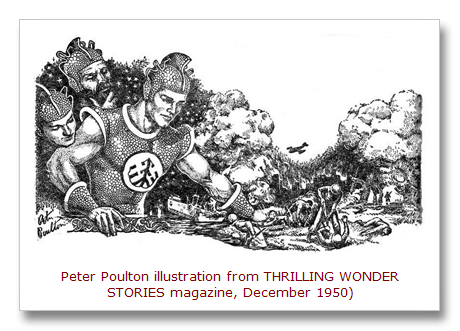 They are trippy pen-and-ink illos that do indeed look like the science fiction magazine art done in the 1950s by Poulton’s much better-known contemporary, Virgil Finlay.

In fact, Finlay and Poulton worked for many of the same classic sci fi pulps. So did several other artists who, like Poulton, also did illustrations for men’s adventure magazines, such as Rudolph Belarski, Rafael DeSoto, Ed “Emsh” Emshwiller, Leo Morey and Norman Saunders. 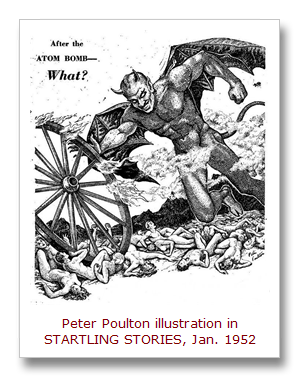 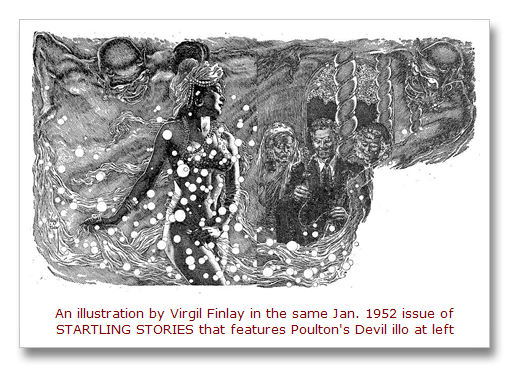 Unlike all of those artists, there are no websites or web pages dedicated to Poulton. No sets of his artwork, either for science fiction pulps or men’s pulp adventure magazines.

But I had to know more – and see more. So, I went back on the hunt. It took a while but I did find more information about Poulton and more artwork by him.

It required me to buy a book I didn’t yet have on my shelves, Jane Frank’s awesome SCIENCE FICTION AND FANTASY ARTISTS OF THE TWENTIETH CENTURY: A BIOGRAPHICAL DICTIONARY (2009). It also required some deep diving into digital copies of science fiction magazines I tracked down on the Internet.

I’ll report back on the results of that research in the next post on MensPulpMags.com.

In the meantime, in case you haven’t seen it yet, check out the website for WEASELS RIPPED MY FLESH! — the new anthology of men’s adventure stories I edited with Wyatt Doyle, at New Texture Books, and writer/musican Josh Alan Friedman. Better yet, click this link to Amazon.com and buy the book.

[UPDATE: Here’s a link to the second post about Peter Poulton.]