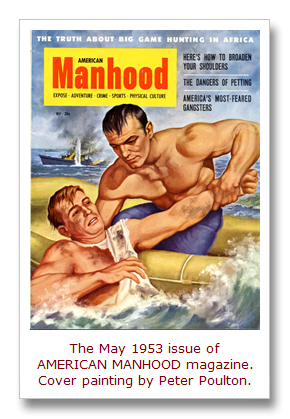 It combined elements of a bodybuilder magazine, a men’s adventure mag and a gay-oriented male pin-up mag.

As I noted in a previous post here, American Manhood was conceived by the famed bodybuilder and fitness icon Josef E. “Joe” Weider.

During the 1950s and 1960s, the publishing company owned by Joe and his brother Ben — Weider Publications Inc. — published magazines in each of the genres that were mixed together in American Manhood.

Those two “Brothers of Iron” are best known as pioneers of the modern bodybuilding and fitness industry. But they were also pioneers in the realm of magazine publishing.

The Weider magazine American Manhood didn’t fit snugly into any of those categories. It was an odd hybrid.

Consider, for example, the strange combination of stories, photos and ads in the May 1953 issue.

There’s a manly western adventure “book-length” story, “The Magic Door Of Llano Estacado” by Robert A. Cutter. This yarn glamorizing buffalo hunters has a nice illustration by artist G. Don Ray, who created artwork for various men’s magazines and mystery digests in the 1950s, as well as for The Official Boy Scout Handbook.

There’s also a manly African safari article by Tromp Van Diggelen, a famed white weightlifting champ and strongman from South Africa who was billed as “The South African Hercules.” 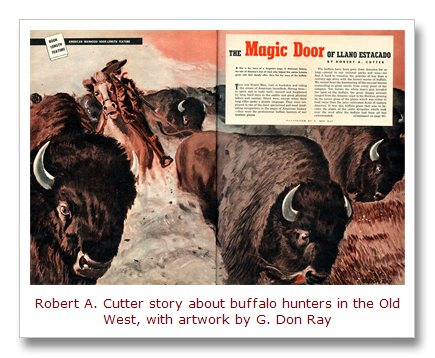 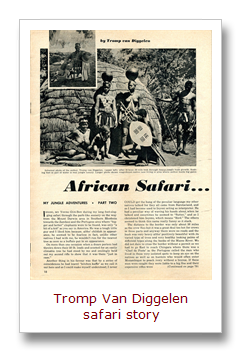 Like Ernest Hemingway and other iconic he-men of the Fifties, Diggelen liked to slaughter, er, I mean hunt big game. His story in American Manhood tells us about the various animals he killed, with the help of his big guns and a crew of native “kaffirs” (the South African N-word). 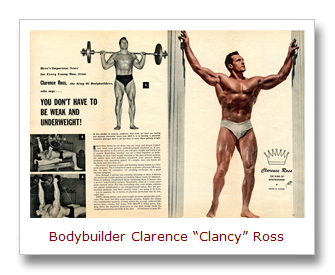 Following Diggelen’s article is another manly piece by American bodybuilding champion Clarence “Clancy” Ross, titled “You Don’t Have To Be Weak And Underweight.” (That’s right, you wimps, you too can get pumped up if you make the effort.)

Also in this issue is a photo spread and how-to piece of historic interest that features George Paine, titled “How You Can Broaden Your Shoulders.”

There’s an interesting mention of this in the online article “How Joe and Ben Weider Became the Founding Fathers of Bodybuilding.” It notes: 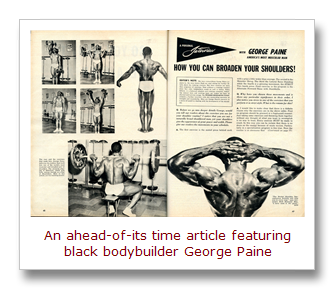 When Joe and Ben created their first bodybuilding competitions way back in the 1940s, they also broke race taboos that permeated American culture in general and American sports in particular.

“The Weiders liberalized bodybuilding at a time when black athletes were shunned from competition,” explains Leroy Colbert, the first black Mr. America. “Before that, the competitions were very prejudiced and unfair, and if you were black, you were not allowed to win. But when Joe and Ben began organizing, they said ‘If you’re the best, you’re going to win. We don’t care what color you are.’”

By opening the door for black and Hispanics in bodybuilding, Colbert maintains, the Weiders were the first to apply true sportsmanship to bodybuilding.

One or more ads for Weider bodybuilding equipment, nutritional supplements or books can usually found in most vintage men’s pulp magazines.

In American Manhood, the majority of the ads were for Weider products, like the two below.

However, unlike most men’s pulp mags, which also featured ads for stag films, nude photos of female models and heterosexually-oriented books and sex aids, the only ads in American Manhood that had sex appeal were geared toward gay men, like these ads for male beefcake photos… 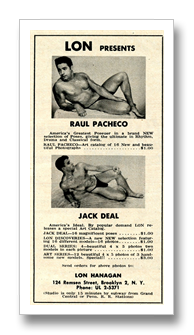 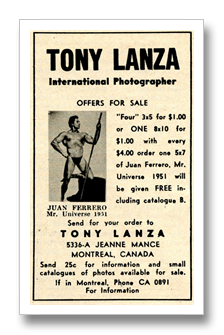 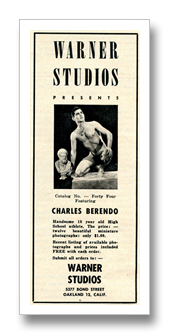 As I noted in my previous post about American Manhood, Joe Weider had no problem with homosexuality. He wasn’t gay. But he also wasn’t homophobic. 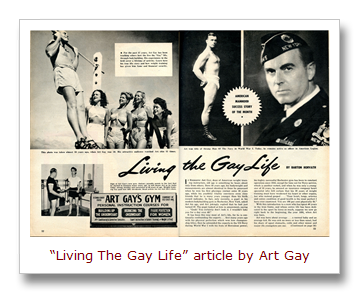 By the way, back in the 1950s, the term “gay” was not the common term used to refer to someone who is homosexual.

That’s why the article in the May 1953 issue of American Manhood that’s titled “Living The Gay Life” is not a jokey double entendre. In fact, it’s an article about a very manly American military veteran who became the “dean of American weight training instructors” — Art Gay.

This profile of Gay was written by Barton Horvath, one of many bodybuilders who had a long association with the Weider brothers. Horvath was featured on the cover of the fist issue of the Weiders’ first magazine, Your Physique, in August 1940. He later wrote articles for Your Physique and several other Weider bodybuilding mags, such as Muscle Builder and Muscle Power, as well as for their hybrid mag American Manhood.

Some of the articles in American Manhood suggest that teenage boys and young men in their early twenties were among the key target audiences.

The May 1953 issue included advice-style pieces like “You Can Become An Athlete” and “So You Want To Be A Marine!” My special favorite is the breathless article “SHOULD TEENAGERS PET?” by Dr. A. Michaels.

In case you’re wondering, the answer is exactly what your parents told you — “No!!!”

As summed up by the editor’s blurb for this helpful article: “If YOU think it’s smart for youngsters to pet then read this doctor’s views. This article may save you from ruining your life!” 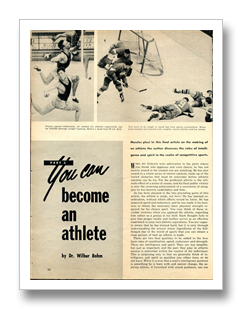 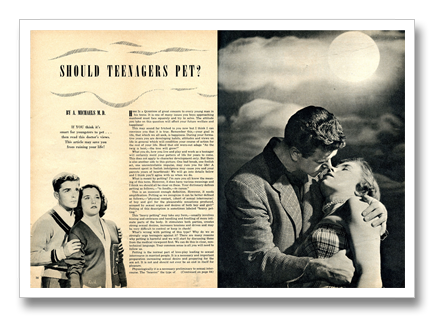 Naturally, guys who are into bodybuilding, whether straight or gay, like photos of bodybuilders. And, American Manhood had plenty of them.

Below are some examples from the May ‘53 issue that were printed as lush duotones. From left to right, they feature bodybuilders Guy Higgens, Malcom Brenner and Alan Stephan. 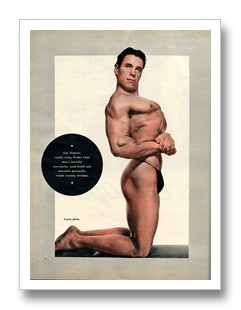 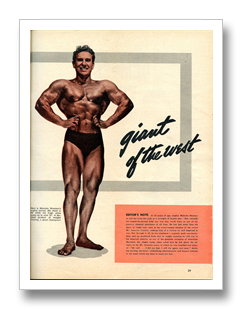 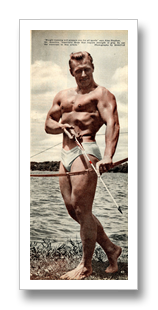 The excellent, vaguely homoerotic cover painting used for the May 1953 issue of American Manhood was done by the talented pulp artist Peter Poulton. 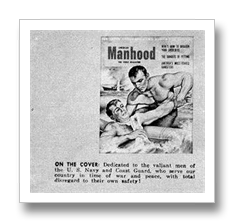 An editorial blurb on the contents page says the lifesaving scene in his painting is: “Dedicated to the valiant men of the U.S. Navy and Coast Guard, who serve our country in time of war and peace, with total disregard to their own safety!”

Poulton provided the cover art for all 12 (or so) issues of American Manhood that were published from late 1952 to 1954.

He also did some cover paintings for the Weider magazine Mr. America during the brief period in the early Fifties when it used pulp-style painted covers.

But he is better known for his science fiction cover and interior art.

He also did cover art for science fiction books, such as Earthbound (1952) by Milton Lesser. 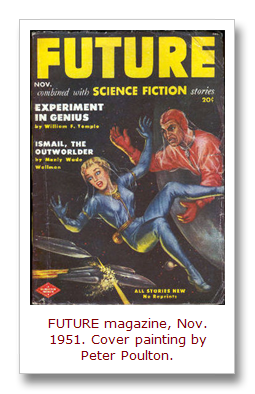 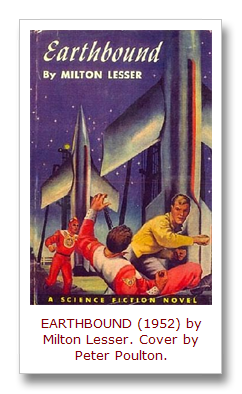 In the near future, I’ll give you my review of Lawrence Abbott’s new biography of “Jungle Jane” Dolinger, the unique adventuress, author and pinup model I’ve featured in some previous posts on this blog.

In the meantime, get in shape you girlie men!