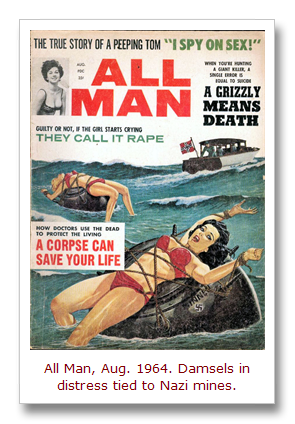 In my previous post, I showed some of over-the-top male prisoner of war torture covers from issues of All Man magazine.

The covers on All Man weren’t always as quite as OTT as the one in that post that shows a lampshade made from human skin. But, in general, they were pretty far out there.

The editors and readers of All Man seemed to have a fondness for “creative” bondage and torture scenes, like the cover at left from the August 1964 issue.

As you can see, it features two prototypical damsels in distress (scantily clad, of course) tied to floating mines by evil Nazis, who are seen pulling away in a boat in the background.

All Man was published in the men’s adventure style format, with wild cover paintings and pulpy stories, from March 1959 until the summer of 1967.

After that, like several other vintage men’s pulp mags, it changed to a girlie magazine format to stay competitive in the changing men’s magazine market.

All Man continued to be published as a girlie mag, dominated by nude photos, until around 1975.

The men’s adventure style issues of All Man in my collection say the magazine was published bi-monthly. The publishing house was Stanley Publications, one of the most prolific publishers of men’s adventure magazines.

I’ll be posting more about those other men’s adventure magazines here in the future.

In the meantime, while we’re on the subject of All Man, I’ll mention an interesting new book that was just published, titled All Man! Hemingway, 1950s Men’s Magazines, and the Masculine Persona.

The author is David M. Earle, an assistant professor in the Department of English and Foreign Languages at University of West Florida in Pensacola.

The book’s focus is on Ernest Hemingway as seen through articles published in men’s pulp magazines.

I recently ordered my copy and will post a review here after I read it.

I’ve also added it to my Men’s Pulp Adventure Store.