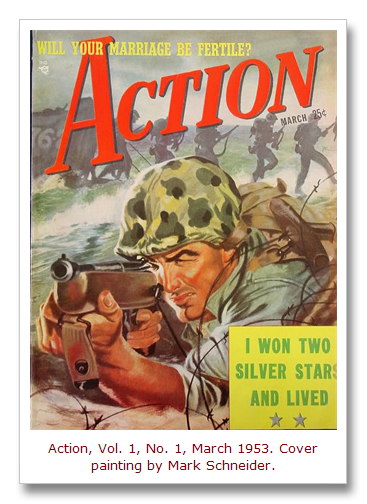 From time to time, I’ll post entries here that I plan to use for an eBook, tentatively titled A Field Guide to Men’s Adventure Magazines. It will show cover scans and provide key information about each of the postwar men’s pulp, or “sweat,” magazine titles published in the 1950s, 1960s and early 1970s.

Action was a bi-monthly magazine that Picture Magazines alternated with Battle Attack, another men’s adventure magazine the company published.

The first issue of Action was published in March of 1953. It ceased publication in December 1953 after only six issues. So today, copies of Action are fairly rare.

Picture Magazines, Inc. was based in New York City, like most of the men’s adventure magazine publishers.

In addition to Action and Battle Attack, the company published a number of entertainment and men’s magazines, such as Picture Show, Zowie, Jackpot and the long-lasting men’s magazine Man to Man, which ran from 1950 to 1973. Man to Man started out as a men’s adventure mag, then switched to the girlie mag format around 1965.

I have a couple of issues of Action magazine in my collection, including Vol. 1, No. 1.

The World War II beach landing scene on the cover of this debut issue was painted by Mark Schneider. A note in the artist credits on the contents page says it’s based on his actual combat experience.

Prior to World War II, Schneider was one of the artists who illustrated the classic Whiz Comics series. Those were classic “Golden Age” comics published by Fawcett that starred the original Captain Marvel (later known as “Shazam!” due to trademark issues).

After World War II, Schneider went back to art and, in the ‘50s, he provided cover paintings and interior illustrations for Action, Escape to Adventure, Man to Man, Showdown for Men, South Sea Stories and other men’s adventure and girlie magazines.

The headlines on the cover of the first issue of Action and those on the covers below give an indication of the types of stories the editors liked. 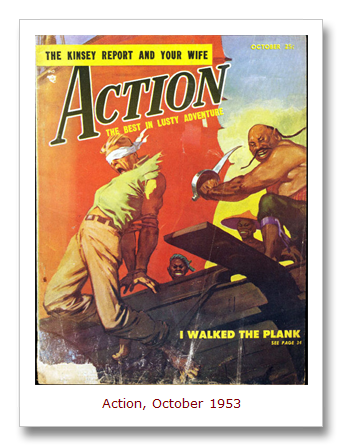 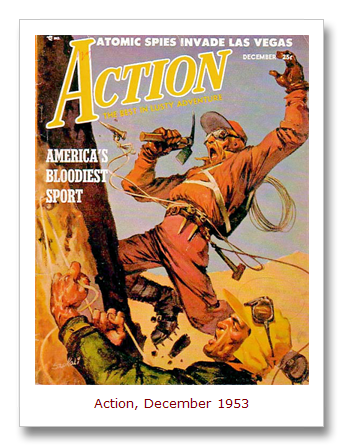 Common topics included war stories, action and adventure tales, sex advice and “sexposes” (sex-related travel and expose stories) and – since it was the Cold War era – stories about nefarious things Communists were up to.

Unlike the first issue of Action, later issues had a subhead under the title that said “THE BEST IN LUSTY ADVENTURE.”

Apparently, they weren’t lusty or adventurous enough to compete with other men’s magazines of the era and generate enough readers to keep Action in print after 1953.

In addition to information found on various websites through online searches, key sources for this entry include:

Fourth of July reading for fans of men’s adventure magazines…