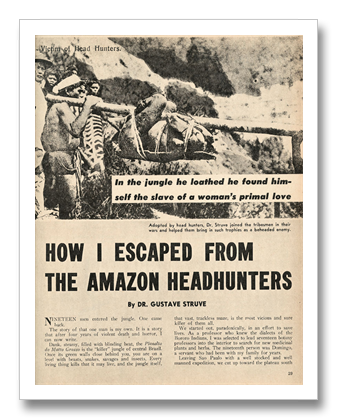 My previous post about Action magazine showed some of the great painted covers used for this short-lived men’s adventure mag (touted as “THE BEST IN LUSTY ADVENTURE”). Now let’s take a look between the covers…

Action, published by Picture Magazines, Inc., only lasted for six issues in 1953. But the stories and ads inside are fairly typical of the men’s postwar pulp magazines in the early 1950s.

For example, the debut issue of Action has several war stories, including two set in The Korean War (which was still going on at the time). There’s a sexposé about “Singapore, the City of Sin.” And, there are several “true adventure” type stories.

The wildest one is a rip-snorting exotic adventure yarn about a group of Western scientists who run into headhunters in the Amazon jungle.

It has a gruesome photo of a headless body (possibly made headless with the pre-Photoshop hand-painted photo retouching techniques of the time). It also has a memorable Mad Max Beyond the Thunderdome-style opening: “Nineteen men entered the jungle. One came back.”

Some of the other articles and ads in March 1953 issue of Action shed light on the anxieties of red-blooded American men in the Fifties – like sperm counts.

The “Male Body” column discusses how diet affected men’s virility. Another article – titled “Will Your Marriage Be Fertile?” – provides an overview of what doctors knew about factors affecting male and female fertility in 1953. It opened with this anxiety-stoking paragraph:

“One of the most disturbing questions confronting every couple approaching the threshold of matrimony is: Will our marriage be blessed with children? Or will we be doomed to a life of childlessness?” 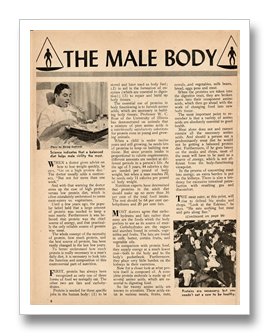 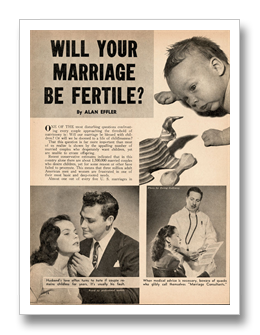 Many ads in Action also address perennial male anxieties, such as job insecurities, baldness and body image issues. For example, there’s one of the classic Charles Atlas ads, in which Charles uses his famed “97-lb weakling” phrase:

“I myself used to be a 97-lb. weakling. Fellows called me ‘Skinny.’ Girls snickered and made fun of me behind my back.”

For those men concerned about being too fat, there’s an ad explaining how to “APPEAR SLIMMER INSTANTLY! With the Amazing TUMMY FLATTENING COMMANDER.”

My favorite ad from Action deals with another anxiety of the Cold War era. It blared: “What Is This World Coming To? ATOMIC WAR!” 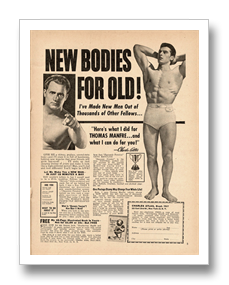 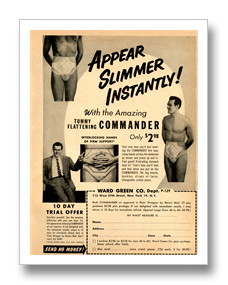 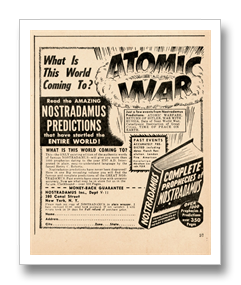 That’s right, folks: Nostradamus predicted it! So, start practicing how to “duck and cover” and restock your fallout shelter. His prediction could still come true.