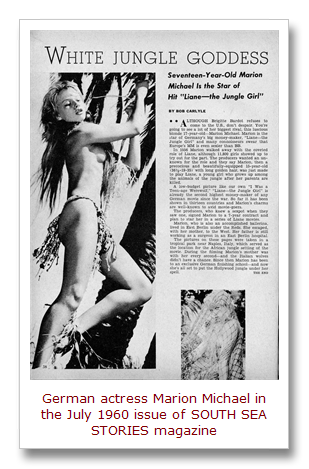 For fans of the pulpiest vintage men’s adventure magazines, there’s a lot to like about SOUTH SEA STORIES. And, the premiere issue, dated July 1960, is one of the best.

It has a cool cover painting by artist Mark Schneider that tells a visual story of tropical treasure, intrigue and violence.

Inside, there are wild “true stories” and fiction yarns about favorite men’s pulp mag topics, such as harems, cannibals, headhunters, war and “white kings” on islands full of sex-starved native girls. 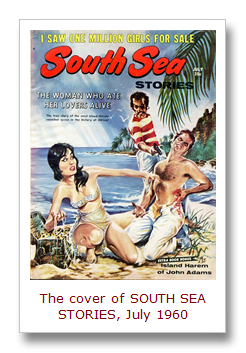 As is often true of men’s adventure magazines, some of the story titles are entertaining in themselves. Titles like:

“I Stole a Slave Girl in Honduras”

“The Woman Who Ate Her Lovers”

“I was Spread-Eagled for ‘Beef Ants’ to Eat” and…

One is a photo spread about Marion Michael, star of the cult movie LIANE, JUNGLE GODDESS.

The other is an exotic adventure story about Jivaro headhunters written by Jane Dolinger, the female adventure writer and pin-up model nicknamed “Jungle Jane.”

When her debut film, LIANE, JUNGLE GODDESS, was released in October 1956, she became an instant sensation in Europe — both for her beauty and the fact that she appeared topless in much of the first half of the movie.

In 1957, Michael starred in the first of a series of planned sequels, JUNGLE GIRL AND THE SLAVER. 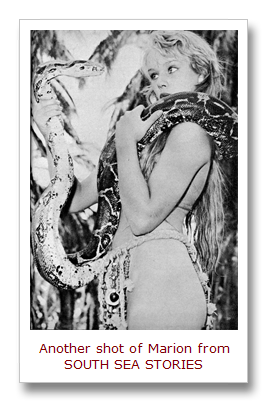 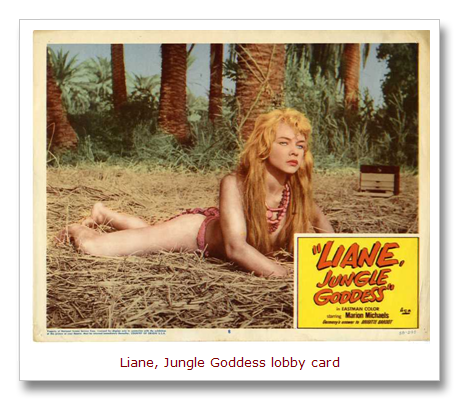 After Michael’s first two “female Tarzan” movies became popular hits in Europe, a dubbed version of LIANE, JUNGLE GODDESS was released in the U.S. in 1959.

It began to look like Michael actually did have a chance of becoming an international sex symbol like Bardot.

SOUTH SEA STORIES was one of many American men’s magazines to make note of this.

The July 1960 issue has a two-page photo spread about Michael that uses promotional stills from the first LIANE movie (which the text wrongly calls “LIANE—THE JUNGLE GIRL”). As you may have noticed from the SOUTH SEA STORIES pics and lobby card above, she was indeed Bardot-esque.

Just to drum home how alluring she was, here are a couple more publicity photos of Marion as Liane. 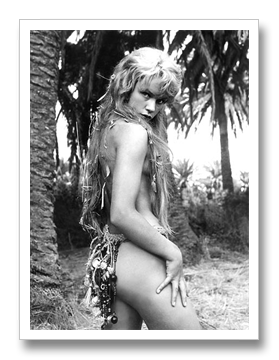 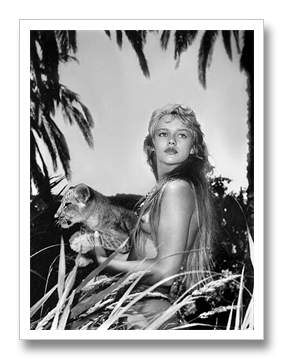 The text for the photo spread in SOUTH SEA STORIES provides a brief bio of Michael with some factoids I have not seen in other articles about her. It says: 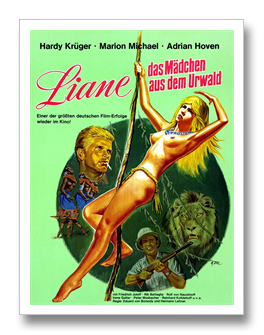 “Although Brigitte Bardot refuses to come to the U.S., don’t despair. You’re going to see a lot of her biggest rival, this luscious blonde 17-year-old — Marion Michael. Marion is the star of Germany’s big money-maker, “Liane — the Jungle Girl” and many connoisseurs swear that Europe’s MM is even sexier than BB.

In 1956 Marion walked away with the coveted role of Liane, although 11,800 girls showed up to try out for the part.

The producers wanted an unknown for the role and they say Marion, then a precocious and beautifully-equipped 15-year-old (36½-19-35) with long golden hair, was just made to play Liane, a young girl who grows up among the animals of the jungle after her parents are killed.

A low-budget picture like our own “I Was a Teen-age .Werewolf,” “Liane—the Jungle Girl” is already the second highest money-maker of any German movie since the war.

So far it has been shown in thirteen countries and Marion’s charms are well-known to avid movie-goers. 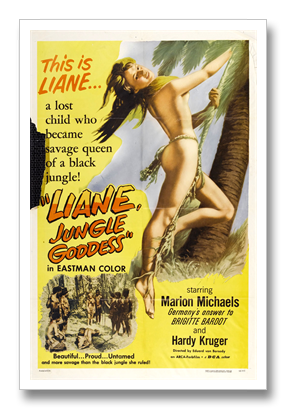 The producers, who knew a sexpot when they saw one, signed Marion to a 7-year contract and plan to star her in a series of Liane movies. Marion, who is also an accomplished ballerina, lived in East Berlin under the Reds. She escaped, with her mother, to the West. Her father is still working as a surgeon in an East Berlin hospital.

The pictures on these pages were taken in a tropical park near Naples, Italy, which served as the location for the African jungle setting of the movie. During the filming Marion’s mother was with her every second-and the Italian wolves didn’t have a chance.

Since then Marion has been to an exclusive German finishing school-and now she’s all set to put the Hollywood jungle under her spell.”

Unfortunately for Marion and men around the world, Hollywood was not in the cards for her.

Tragically, in 1960, she was in a terrible car accident that left her disfigured and unable to work for months. Her shot at fame flickered out. After appearing in several more generally-ignored films in the early Sixties, she returned to Communist East Germany, where she lived in virtual anonymity for decades.

Marion Michael died in 2007 at age 66, but her beauty and her LIANE movies live on, on DVD, the Internet and copies of vintage men’s magazine sold on eBay.

If you’ve never heard of her, you might be surprised at how many web pages turn up when you do a search for “Liane, Jungle Goddess.”

In the next post on this blog, we’ll take a look at the other famous “jungle girl” featured in the July 1960 issue of South Sea Stories magazine — “Jungle Jane” Dolinger.

In the meantime, if you’ve never seen Marion Michael in LIANE, JUNGLE GODDESS, which co-stars the great Hardy Kruger in one of his first films released in the U.S., I’ll help you catch up on your cult movie viewing.

Just click on the video below, try to keep your tongue in your mouth and watch the entire film online, courtesy of The Internet Archive. (It’s also available on DVD if you decide you want it for your collection.)

“Jungle Jane” Dolinger among the Jivaro headhunters and beyond