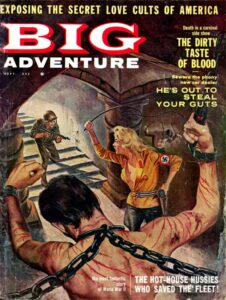 There were several notable premieres in the realm of mainstream pop culture during the month of September 1960.

The musical IRMA LA DOUCE debuted on Broadway. Marilyn Monroe’s movie LET’S MAKE LOVE was released. And, the TV shows MY THREE SONS and THE FLINTSTONES premiered on ABC.

Meanwhile, a bit outside the mainstream and to much less notice, the first issue of BIG ADVENTURE magazine appeared on newsstands. 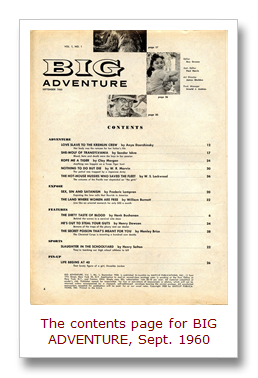 Or, at least, it appeared on those newsstands that were willing to publicly display “sweat magazines,” the subgenre of men’s adventure mags that regularly featured cover paintings of nearly (but not quite) naked women and men being menaced or tortured by evil Nazis (or by evil Japs or Commies, bloodthirsty natives, psychopaths, Satanists or some other fiends).

The September 1960 issue of BIG ADVENTURE, Vol. 1, No. 1, is a classic example of this outré subgenre.

The uncredited cover painting (which I’m pretty sure is by artist Vic Prezio) was later used on the October 1962 issue of BATTLE CRY, another classic men’s adventure magazine.

It shows a hot female Nazi in a cleavage-revealing uniform, caught in the act of whipping a bleeding male prisoner of war who’s chained to the wall of a dungeon-like room.

In the background, a tommy-gun toting American GI is coming to the rescue. It looks he’ll have to shoot it out with the evil Nazi babe, since she’s grabbing her Luger as he’s coming down the steps. 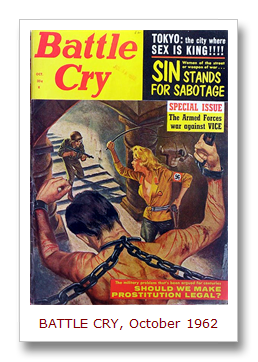 But we’ll never know except in our own imaginations.

There isn’t actually any story inside the September 1960 issue of BIG ADVENTURE that goes with the cover painting.

It’s an over-the-top scene that was created purely to compete for the eyeballs of men who bought sweat mags at newsstands.

And, though there’s no story with a scene like the one shown on the cover, there are some equally wild, pulpy tales inside.

One of my favorites is “THE DIRTY TASTE OF BLOOD,” an amazingly well-written faux “confession” story about a female carnival geek who bites the heads off snakes.

“Now, remember folks — to the eye this will appear to be a normal fifteen-year-old girl. Some of you might even call her pretty. We try our best, but we can’t guarantee that she’ll keep her clothing on. She was captured naked and detests the garments of civilization. So I must warn any of you who would be upset by the sight of a naked woman not to go inside. For this strange child has the full-grown, mature body of a woman-although her mind is that of a wild beast.”

That’s the barker’s pitch to get rubes to pay to see her. Of course, she’s not 15 and she’s not feral. She’s a professional carny freak.

I also especially like the story “SHE-WOLF OF TRANSYLVANIA.”

It features a gorgeous Rumanian babe who enjoys killing Communists with her trained wolves and pursuing other types of unusual fun. As the editor’s description on the contents page puts it: “Blood, hate and death were the keys to her passion.” 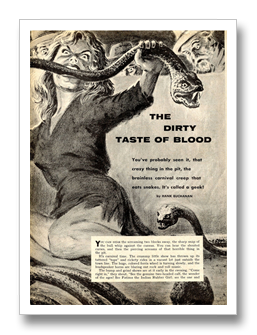 I actually think most of the other fiction stories in the premiere issue of BIG ADVENTURE are also above average for a men’s sweat magazine, including: “LOVE SLAVE TO THE KREMLIN CREW,” “ROPE ME A TIGER,” “NOTHING TO DO BUT DIE” and “THE HOT-HOUSE HUSSIES WHO SAVED THE FLEET.”

Their style is a bit outdated and they’re sexist by today’s standards.

But they aren’t crap. They’re entertaining, mildly sexy and/or violent pulp fiction short stories written by competent writers. Most, I suspect, were written under pseudonyms, with tongue often planted in cheek. 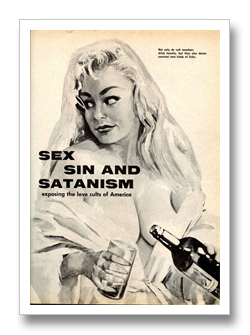 There are also some historically interesting exposes in the same issue. One is about the Sixties phenomenon of Satanist swinger love cults (“SEX, SIN AND SATANISM”). One is about the high number of high school kids being killed and maimed in team sports due to shoddy equipment, lax rules and overzealous coaches (“SLAUGHTER IN THE SCHOOL YARD.”) Another is an ahead-of-its-time piece about the modern chemical and biological weapons being developed by the Pentagon and the Kremlin (“THE SECRET POISON THAT’S MEANT FOR YOU”).

There’s only one cheesecake photo spread in the September 1960 issue of BIG ADVENTURE, but it’s a doozy: a four-page spread featuring Donalda Jordan.

Donalda, a fetching and well-endowed redhead, was a popular men’s mag model from the mid-1950s to the mid-60s. Many of her classic cheesecake photos were taken by boobmeister Russ Meyer. So, as you can probably guess, the title used for her spread in BIG ADVENTURE — “LIFE BEGINS AT 40” — does not refer to Donalda’s age. 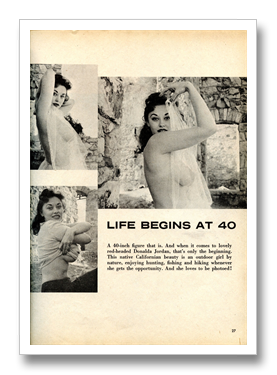 BTW, I recommend BIG ADVENTURE magazine pretty highly to anyone who is interested in men’s adventure magazines and non-mainstream Sixties pop culture.

It was published by Matclif Publications, Inc., which also published SAVAGE ADVENTURE.

Only five issues of Big Adventure were published between September 1960 and June 1961. Today, copies are hard to come by and often a bit pricey if you can find them.

Of course, for only $2.99, you can download a high-resolution PDF copy of the entire September 1960 issue of BIG ADVENTURE from my slowly-growing virtual newsstand on Payloadz.com.

It’s growing slowly because it takes a long time to scan in a whole issue. And, I’m an old fart who doesn’t do anything too fast anymore. How old? Well, bub, I was 10 when the premiere issue of BIG ADVENTURE was published. Do the math.

But, as you can tell from my taste in reading material, I’m still unrepentantly juvenile at heart.