I recently stumbled across a terrific site for fans of pulp magazine and comic artwork called Cover Browser – at www.CoverBrowser.com.

I’m not sure why I hadn’t noticed it before, because it’s truly amazing. It contains thousands of vintage comic and pulp mag covers.

The largest number come from comics, but the “Pulp” section has plenty to offer. It includes good quality scans of covers from many prewar pulp magazines as well as from some of the classic men’s adventure magazines. For example, here are a few Cover Browser scans from the postwar men’s pulp magazine, All Man… 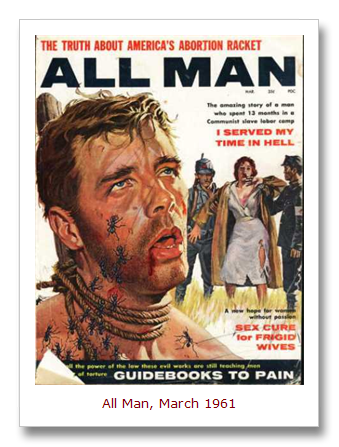 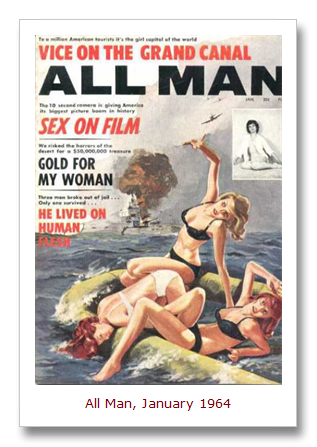 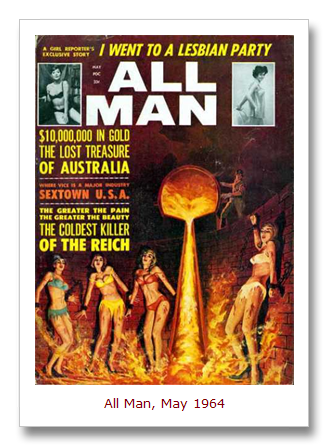 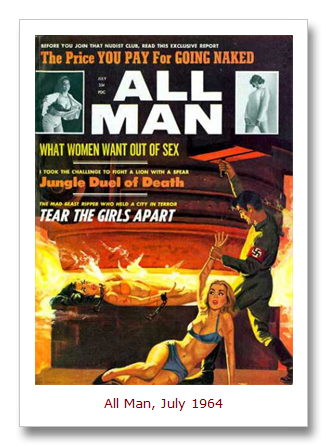 All Man was one of the Stanley Publications magazines. It was published from 1959 to 1967.

As you can see from the May ‘64 and July ‘64 issues above, All Man’s editors and readers liked Nazi bondage and torture covers. They were especially common on the magazine from 1963 through 1967.

The March 1961 cover is a wild example of what I call the Commie bondage and torture subgenre. In those, the bad guys are Communists – Russians, Red Chinese, Cubans, etc.

The January 1964 shown above is a babe-filled entry in the survival at sea subgenre.

The Cover Browser site was created in 2006 by a German guy named Philipp Lenssen. His site currently has over 450,000 searchable covers. There’s also an artist index page. My hat is off to him!

Philipp notes on the “About” page of his site that: “the covers are presented here ‘as-is’ – some are cool, and some are only of interest as historical artifacts; e.g. some pulp covers contain ridiculous racist stereotypes.”

It’s interesting that his disclaimer doesn’t mention the politically incorrect bondage and torture covers on his site from the prewar pulps and and postwar men’s adventure magazines.

Maybe those aren’t considered as un-PC in Germany as they are here in the US. Hmmm…