In my previous post, I featured the cover of the January 1958 issue of Man’s Conquest magazine, which has a great crocodile attack cover painting. 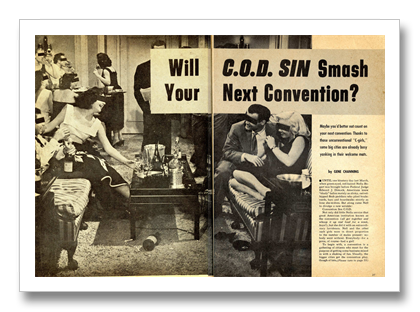 Several people who read the coverlines (cover headlines) on it said they’d like to know more about two of the articles mentioned: the sexpose about “C-girls” and the article about thorium prospecting.

The first one is touted on the cover with the headline: “A REPORT ON “C-GIRLS” AT MEN’S CONVENTIONS.” In the table of contents, it’s promoted with the sly line: “The coming invasion of the ‘C-girls.’”

Inside, the article itself uses the title “Will C.O.D. SIN Smash Your Next Convention?”

What are “C-girls?” Apparently, a 1950s variation of “B-girls” – which stands for “bar girls,” a term dating back at least to the 1930s. B-girls were woman that bars paid to hang out, flirt with men and get them to buy more drinks. B-girls weren’t necessarily prostitutes, though many were.

“C-girls” were women hotels paid to make sure men at conventions had a good time and spent freely. I’d never heard the term before I saw the 1958 article in Man’s Conquest, but it seems to suggest the term was in common use back then.

To learn more about these intriguing ladies click this link to download the “C-girls” article as a PDF. 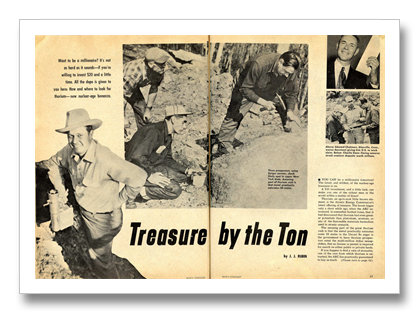 The thorium prospecting article is an interesting relic of “the atomic age” of the late 1950s. Prospecting for uranium deposits for use in A-bombs or nuclear power plants was already a legendary “get rich quick” hobby for some adventurous men of that era.

The Man’s Conquest article says that thorium prospecting was the next big thing. It’s titled “Treasure by the Ton” and has an enticing subhead that says:

“Want to be a millionaire? It’s not as hard as it sounds – if you’re willing to invest $20 and a little time. All the dope is given to you here: How and where to look for thorium – new nuclear age bonanza.”

So, get your dope here and find out how to get rich, by clicking on this link to read the thorium article for yourself.

And, since some people said they liked the chest-hair-growing killer croc cover in my last post, here’s another one of my favorite croc attack covers from a men’s adventure magazine… 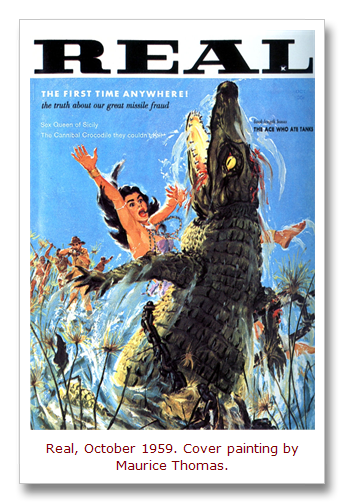 This one is from the October 1959 issue of the men’s pulp magazine that was simply titled Real.

The cover painting is a great action scene that tells a mini-story in itself when you study what’s going on in the foreground and background.

It was done by American illustrator Maurice Thomas, who also seems to have done some cool movie poster art.