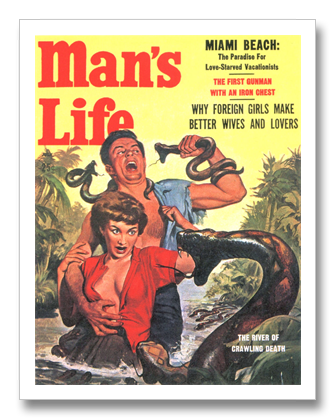 There’s a subgenre of the postwar men’s adventure magazines that features good-looking women and men being attacked by vicious animals (including vicious rodents, turtles and aardvarks).

Within that animal attack subgenre is a sub-subgenre that I’m hereby dubbing “snake menace” – to describe the many cover paintings and stories that featured scary, menacing snakes.

In my previous post, I included some classic snake menace artwork by renowned magazine and comics artist Syd Shores.

Will Hulsey – who did the famed “Weasels Ripped My Flesh” cover painting for the September 1956 issue of Man’s Life – also created some outstanding snake menace covers for Man’s Life.

The example at left is from the July 1958 issue.

The chesty, snake-battling man in it actually bears a resemblance to the beleaguered guy on Hulsey’s “Weasels Ripped My Flesh” cover.

Of course, Hulsey’s snake menace cover also has the added attraction of a chesty damsel. And, I’m guessing it was a good-selling issue back in 1958.

The year before, Hulsey did another snake cover for Man’s Life. That one features a blonde babe who seems to have been shopping at the same red torn-bodice boutique as the brunette in the July ‘58 issue.

Hulsey’s 1957 snake menace cover is shown below. Next to it, is another cool snake cover on the April 1961 issue of Adventure magazine. That one was painted by another prolific men’s pulp mag artist, Vic Prezio. Interestingly, it looks like Prezio copied Hulsey’s snake – or used the same snake model. And, one of his babes also apparently shopped at the red torn-bodice boutique. 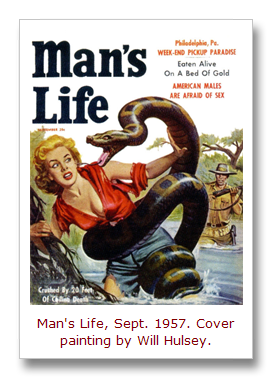 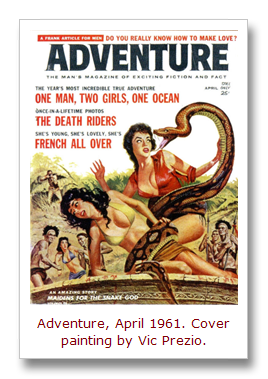 Below are two more great snake menace covers illustrators. First is my tattered but treasured copy of the January 1963 issue of Bluebook, with cover art by George H. Mayers. Next to that is the cover of Peril magazine’s September 1958 issue (artist uncredited). 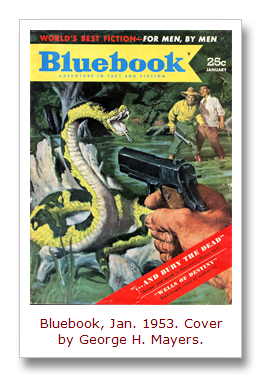 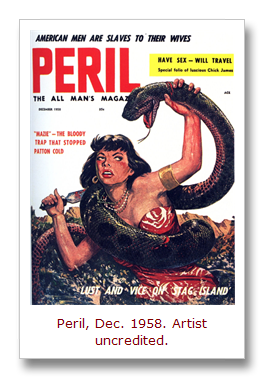 Peril’s rip-roaring image of the Amazon-like tough chick preparing to cut off the head a huge snake is a little bit of men’s pulp mag heaven – if you’re into that kind of stuff. (Like me.)

Do I think there’s anything phallic about these big scary snakes? Naw, sometimes a snake is just a snake, Sigmund.