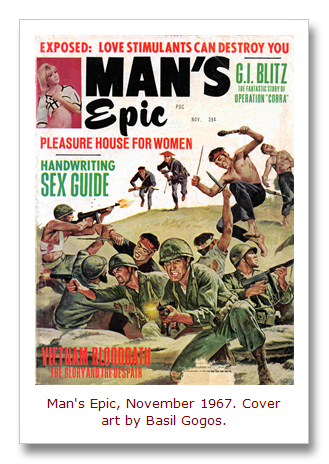 The cover and cover story for the November 1967 issue of Man’s Epic magazine is unusual for the men’s adventure magazine genre.

Its cover painting, by artist Basil Gogos, features a Vietnam War scene. (Special thanks to Rich Oberg, the Dean of men’s adventure magazine collectors, for letting me know Gogos did the cover on this one.***)

The non-fiction article it was painted for – titled “VIETNAM BLOODBATH: THE GLORY AND THE DESPAIR” – is a highly negative critique of how badly the war was being run by the powers that be.

The Vietnam war was controversial. But usually, if a men’s adventure magazine did mention the Vietnam, it had a pro-war slant (like the article mentioned in my recent post “GIRLS GIVE IN TO MEN WHO GO IN”).

There weren’t a lot of covers and articles related to Vietnam in the men’s adventure mags.

They were really created for and more targeted to an older generation of military vets – those who fought in WWII and Korea.

Most grunts who fought in Vietnam were probably not reading men’s adventure mags. More likely, they were reading racier mags like Playboy and Hustler and the other explicit “slick” girlie magazines that eventually led to the demise of men’s adventure pulp mags in the 1970s.

For all those reasons, you don’t see many men’s adventure magazines that feature ‛Nam-related covers. And, it’s rare to find an article in one that is highly critical of the war. 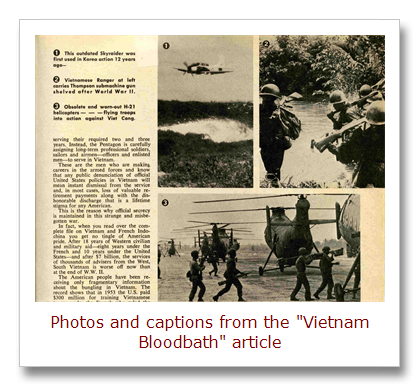 But the article in the November 1967 issue of Man’s Epic is blistering. It tells of American and South Vietnamese soldiers being forced to fight with obsolete equipment, bungled strategies by the military brass, and efforts to prevent the public from hearing the true facts about the Vietnam War.

“Our strategy has failed,” says author Kurt Vaughn. “The war is being lost in Vietnam.”

There’s a telling anecdote about Vietnam and men’s adventure magazines in Bruce Jay Friedman’s book Even the Rhinos Were Nymphos: Best Nonfiction.

In the 1960s, Friedman was a men’s pulp mag editor for Martin Goodman, publisher of a long list of men’s adventure magazines, including Male, Men, Man’s World and For Men Only.

As recounted in Rhinos, Goodman told Friedman he wanted to avoid stories about the Vietnam war in his magazines because you couldn’t “give Vietnam, away.”

Friedman noted in his book that it was a prescient observation.

*** NOTE: Examples from Rich Oberg’s collection are what you see in the beautifully illustrated book Men’s Adventure Magazines, which Rich helped create for the Taschen publishing company with writers Max Allan Collins and George Hagenauer.