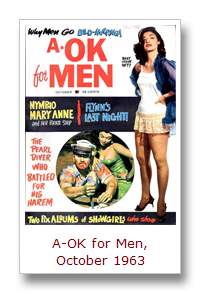 In my previous entry here, I showed cover scans from the five known issues of the men’s adventure magazine A-OK for Men, a hard-to-find men’s pulp mag published by Jalart House from October 1962 to October 1963.

Those covers do include one torture and bondage scene, but most of the A-OK for Men cover paintings lean more toward the adventure mode than the S&M menace mode.

In fact, many of the stories inside seem wilder than the cover art. Here are some of the OTT story titles from issues of A-OK for Men – in the “nymphos” subgenre:

“The Nympho Who Beheaded 26 Lovers”
“Moscow Has a Nympho Street!”
“Sadist Nympho of the Sahara Sands.”
“The Nympho Doctor Who Bought a Bordello!”
“Nympho Mary Anne and Her Pirate Ship.” 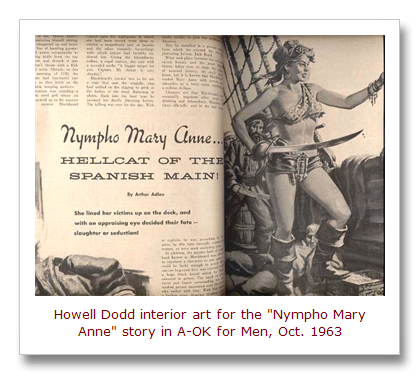 For example, several issues of A-OK for Men have artwork by Howell Dodd. He was an American artist who first became widely known for illustrations he did for the Associated Press news service in the 1930s and during World War II.

Dodd also did covers and interior art for prewar pulp magazines in the 1940s and for men’s adventure magazines and more mainstream publications in the 1950s and 1960s.

But Dodd may have been most widely known as one of the instructors, editors and eventual directors of The Famous Artists School, which has been teaching generations of budding artists how to draw and paint through mail order courses and books since 1948.

In the Fifties and Sixties, the Famous Artists School approach to art was generally in the Norman Rockwell style. Indeed, Rockwell was one of the school’s most illustrious faculty members and was commonly featured in its familiar “We’re Looking for People Who Like to Draw” ads.

The best place to see more cool art by Howell Dodd is on the excellent American Art Archives website. If you haven’t seen that site, you should check it out. It has a wealth of great examples of vintage magazine illustrations along with biographical info on many of the artists. 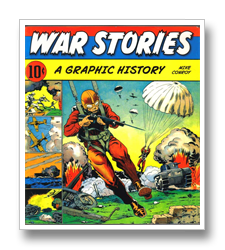 I also have a new book recommendation for you – War Stories: A Graphic History.

It’s not one of the graphic novels in the War Stories series by Garth Ennis (though they’re great, too).

This book is written by Mike Conroy, an author who has previously written some other interesting books about comics history.

As you probably know if you’re reading this blog, vintage comic art was closely related to pulp art and many great illustrators created art for both comics and pulp magazines. So, if you like pulp magazines and pulp art, I suspect you’ll like Conroy’s book.