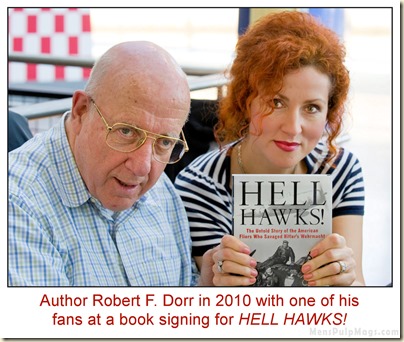 EDITOR’S NOTE: I first met author Robert F. Dorr, via email, in 2009. Between then and his death on June 12, 2016 I talked to him many times by phone about the military aviation history books and articles he is best known for and the men’s adventure magazine stories he wrote in the 1960s and 1970s. Last year, I had the honor of collaborating with Bob on a book that collects some of best of those stories, A HANDFUL OF HELL.

The blog post below is an updated version of a post I wrote in 2010, after one of the phone calls I had with Bob. I’ve written quite few posts about him here over the years. Now that he’s gone, I’m updating and reposting them for the benefit of his old and new fans who may have missed them. I sure miss Bob.

Bob is one of our country’s top military and aviation historians. He’s written more than 70 history books and hundreds of non-fiction articles over the past few decades.

It has been aptly described as an aerial “Band of Brothers” story about the 365th Fighter Group — the heroic P-47 Thunderbolt pilots and crews who played a vital role on the European front during World War II.

I’m a big fan of HELL HAWKS! and Bob Dorr’s other history books.

I’m also a big fan of the stories he wrote earlier in his writing career, in the 1960s and 1970s, for men’s pulp adventure magazines. 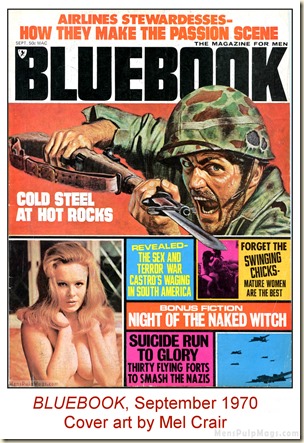 He wrote hundreds of them and is widely viewed by knowledgeable fans as one of the best of the many great writers who once wrote for the genre.

In part, that reflects his lifelong interest in military aviation, the history of World War II, the Korean War and the Vietnam War, as well as his deep respect for men and women who served in the military.

But Bob also became adept at writing many other types of stories found in men’s pulp mags.

He wrote his own often uniquely pro-animal variations of the “killer creature” animal attack yarns that were common in men’s adventure magazines. [One of them, the “GHOST BEAR THAT TERRORIZED A TOWN” from MALE, February 1975, is included in our WEASELS RIPPED MY FLESH! anthology.]

He also wrote sex exposés, another type of story that is common in men’s adventure magazines. I call them “sexposés” for short.

Sexposés were something of a specialty for several notable authors who wrote for men’s pulp mags, including Robert Silverberg, now best known for his science fiction stories, and Lawrence Block, now best known for his crime and mystery novels. [See my series of posts about “Lesbians in Men’s Adventure Magazines” for some examples.]

Bob Dorr starting writing sexposés in the late 1960s, when the relative number of war and adventure stories in issues of many men’s pulp adventure mags began to decline and the number of sex-related stories increased.

Some of the sexposés Bob wrote had a connection to the military, such as “THE SEX LIFE OF OUR GIs IN GERMANY,” published in the June 1965 issue of MAN’S MAGAZINE. [That one is included as a bonus story in the special hardcover edition of our collection of Robert F. Dorr stories A HANDFUL OF HELL.]

Given that Bob’s day job was being a globe-hopping senior diplomat for the U.S. State Department from 1964 to 1989, it’s not surprising that some of his sexposés are sex-oriented foreign travelogues.

One of my favorites is “BEHIND THE SCENES OF BUDAPEST’S SEX REVOLT,” in the September 1970 issue of BLUEBOOK magazine.

It suggests that after the Soviet Union squashed the Hungarian uprising in 1956, Hungarian men and women rebelled by pursuing greater sexual freedom.

In one of the phone interviews I did with Bob, I had a chance to ask him some questions about those types of risqué stories and he reached back into his memory for some answers…

BOB DEIS:  Bob, first off I want to tell you how much I enjoyed HELL HAWKS! And, based on the reviews I’ve seen it looks like it’s going to be one of your most popular history books.

BOB DORR: HELL HAWKS! has, indeed, had a positive reception. It has been praised by critics and by many readers in reviews on Amazon. It’s primarily a book about Americans at war and my co-author Thomas Jones and I were delighted when one reviewer called it the best book ever about the P-47. I’m also especially pleased that a lot of people have come to our book signing events.

You wrote hundreds of action, adventure and war stories for men’s adventure magazines. From what I’ve seen in my collection, you wrote at least twenty “sex exposé” stories. Were they your ideas or were they suggested by editors?

DORR:  I wrote dozens of sex exposé stories and I did it all without having sex with anybody. With the exception of one article, no editor ever suggested a topic to me. I simply looked at what the magazines were publishing and tried to copy it. The men’s adventure magazines started changing in the late 1960s. As they evolved to compete with magazines like PLAYBOY and HUSTLER, they had covers with photos showing fully exposed female nipples instead of painted covers and the types of stories changed, too. So then I also began writing sex stories. Most were sex exposé stories.

ng but pretty tame by today’s standards. How do you view them in retrospect?

I think people often do too much over-analyzing of such stories. I wrote many for the men’s pulp magazines and it would involve too much analyzing for me to say a great deal about them.  But I can tell you there was no first hand research involved.

The Budapest story has references to true history and a lot of details about the city. How much was based on personal knowledge versus imagination?

DORR:  I’ve traveled to many places around the world but I’ve never been to Budapest. I don’t remember how I came to write that story. I knew a lot about what was going on during the Cold War because of my work for the State Department. And, I had some knowledge about the situation in Hungary after World War II. But pure imagination was a big factor. Remember that any place with a faraway name was deemed exotic back in 1970 and not very many other Americans had ever been to Budapest, either.

In 1970, about how much would you be paid for a story like that one?

DORR:  The Magazine Management Company magazines, like STAG and MALE, and Pyramid’s MAN’S MAGAZINE almost always paid $300 to $350. BLUEBOOK paid less, so I may have received $200 for “Budapest.”

Even two-hundred in 1970 dollars is not bad. That would be over a thousand in today’s dollars. About how many stories did you write each month?

DORR:  I finished about one story every couple of weeks during my heyday as a writer for the men’s adventure magazines.

DORR:  Yes. I got out of the Air Force in 1960. I then spent several years doing various things, but my goal was to become a writer. The first example of my work in men’s pulp adventure magazines was published in the August 1962 issue of REAL magazine. It was a story about a B-26 crew in the Korean War called “THE NIGHT INTRUDERS.” [Another bonus story included in the hardcover edition of A HANDFUL OF HELL.] That was a fictional story. Early on, I also wrote some fact-based articles about well-known American heroes, like Medal of Honor recipients. I mostly wrote war and adventure fiction stories that had some factual background. I eventually wrote all kinds of stories for men’s adventure magazines, up until they all disappeared in the late ‘70s.

In 1970, when your Budapest sexposé was in BLUEBOOK, the publisher was B.R. “Bud” Ampolsk. He published of some of the wilder men’s adventure magazines through his Reese and EmTee companies. Do you have any recollection of dealing with him?

DORR:  I never had any personal communication with Ampolsk or anyone else at BLUEBOOK. I simply mailed stuff to them. Remember, a long-distance phone call was a big deal in those days. I never spoke to anyone at BLUEBOOK on the phone and never went to their offices. In fact, I had virtually no real communication with the editors at any of the men’s adventure magazines. Basically, I typed up a story, I sent it to one of the editors, and either they used it or they didn’t. If they used it they sent me a check. If they didn’t they sent me a rejection note, then I’d often send it to another editor. I did eventually have some telephone communications and one personal meeting with Pyramid editor Phil Hirsch, the editor of MAN’S MAGAZINE. My fifteen years of communication Noah Sarlat, who edited STAG, MALE and other magazines for Magazine Management, consisted of little notes that contained three or four words.

The sexual content in men’s adventure stories in the 1960s and early 1970s, including sexposés like your Budapest story, is very mild by today’s standards. Barely R-rated. Did the editors give you any guidelines about how to write about sex topics or do much editing of what you wrote?

DORR:  No. But I guessed that they had guidelines and composed my stuff based on the level of explicitness in other stories they were publishing. The editors made very few changes and discussed none of them with me.

Were sex exposé stories like “Budapest” fun to write?

DORR:  It wasn’t half as much fun as you might suspect. I’m picturing me then with a manual typewriter, carbon paper, white-out ink, cigarettes, and booze. I think I recall being fairly humorless about it at the time because I was serious about making money as a writer. In retrospect, it’s easier for me to appreciate that stories like “Budapest” were, to a large degree, farce.

If you’re curious about Robert F. Dorr’s story “BEHIND THE SCENES OF BUDAPEST’S SEX REVOLT,” you can download and read a PDF copy by clicking this link.