Today’s post is Part II of my interview with Bill Devine, author of DEVINE’S GUIDE TO MEN’S ADVENTURE MAGAZINES. (Here’s a link to Part I.)

DEVINE’S GUIDE was the first — and, at present, is still the only — printed guide to men’s adventure periodicals published in the 1950s, 1960s and early 1970s. (A PDF version is now available as a download in the Payloadz store linked to this blog.)

Bill, one of the interesting things you note in DEVINE’S GUIDE is that only a small percentage of men’s adventure magazines have survived.

DEVINE: Yeah, I estimated that about 1% of the men’s adventure magazines that were published survived and that about 1% of those surviving copies are up for sale at any one time. I came up with that based on what I had seen available at shows, used bookstores and comic shops, compared with what average press runs were. If a men’s adventure magazine was selling 100,000 a month, which was an average press run for many of them, I estimated that about 1,000 still survive. And, out of that 1,000 surviving copies you probably wouldn’t be able to find more than about 10 copies for sale at any one time, somewhere. When they were published, men’s adventure magazines were throwaway publications. People didn’t keep copies thinking they’d be valuable some day. Most guys read them once and threw them in the trash. Luckily, some were stored away in warehouses and attics, but they’re only a tiny percentage of what was published.

Do you think your estimate of 1% of surviving copies being up for sale still applies nowadays, given that it’s easier to sell and find old magazines on eBay and other websites? 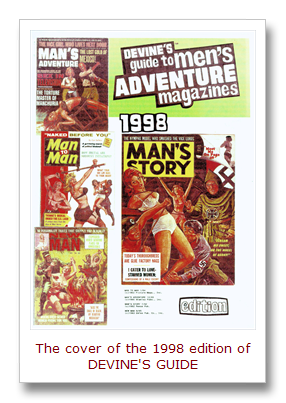 DEVINE: Yes, eBay and the Internet made it easier to find the 1% that’s out there and probably brought out some more issues. I think it brought out some copies that were stored away in attics, at least in the beginning of the eBay era about 10 years ago, when people realized they could sell things like old magazines on eBay. In the past couple of years, with the bad economy, a lot of items put on eBay aren’t selling or aren’t selling for as much as they did five or ten years ago. So, now there isn’t as much incentive for people who are just cleaning out their attics to put up a few men’s adventure magazines for sale even they find some.

What kind of prices were copies of vintage men’s adventure magazines going for when you wrote DEVINE’S GUIDE?

DEVINE: At shows and flea markets in the late 1990s, average prices were about $3 to $5 apiece for copies that were all complete and in good condition. Some knowledgeable people would know certain covers, like the Nazi covers, could be priced higher. Those would sell for $20 or $30 back then. And, first issues — volume one, number one of a title — sold at a premium, too. For whatever reason, people like a first issue. They’d sell for $10, $20 or $30.

What trends have you seen in prices for men’s adventure magazines since eBay started?

DEVINE: When eBay was first getting big, especially in 1999 and 2000, you’d see some of the magazines, like an issue with a nice Norm Eastman Nazi cover, go for $150 to $200 dollars. So, eBay was especially great for sellers at the time, about ten years ago. There were many people who had never seen men’s adventure magazines. All of a sudden eBay made the magazines more accessible and gave sellers access to more buyers. So, you would get bidding wars between two or three collectors who’d see an issue and think ‘I gotta have that.’ Next thing you knew, the bid was $200. But today, in this economy, you don’t see many prices go that high. The magazines I’ve been selling are generally going in the range of $20 to $30. 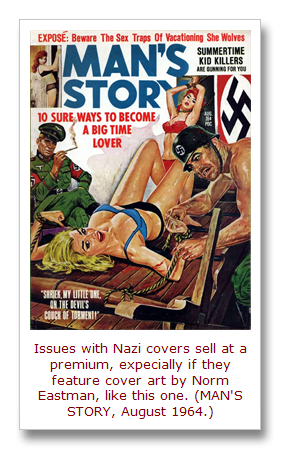 I’ve noticed a similar trend on all kinds of vintage magazines, not just men’s pulp mags. For example, prices were higher about ten years ago for issues of magazines like PLAYBOY from the 1950s, 1960s and 1970s.

DEVINE: Yes, I also think that applies to many antiques. There was a flurry of greater availability and higher prices on some things in the early years of eBay. In the late ‘90s, when I wrote the guide, that was the start of the upward trend on prices for men’s adventure magazines. It kind of peaked around 2002 and then leveled off. We’ll probably see higher prices again when the economy improves. Even now, if you have several people bidding against each other on an issue, it could go anywhere. But if you have only one buyer watching an issue, it may sell at the opening price, which could be anywhere from a buck or two to twenty or thirty bucks.

It seems like the Nazi covers and other bondage and torture covers still get a premium.

DEVINE: Yeah, they do. There may be more people looking for them. Bondage as a subject has been around a long time in movies and was in the original pup magazines. There are always people who will buy those covers. There are always people who will buy issues with ‘Good Girl Art,’ especially the ones with damsel in distress cover paintings. Things like that. There are also people who are into military aviation art. If you put up an issue with a military aviation scene on the cover, there are certain fans who will want it. 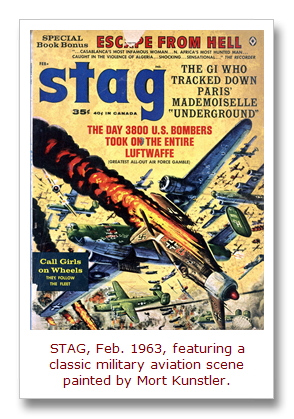 Do you have any favorite artists or favorite types of cover?

DEVINE: I have some artists I especially like — Norm Eastman, Mort Kunstler, Al Rossi. There were a lot of good artists working for men’s adventure magazines, it’s hard to pick just a few. Bruce Minney is also one of my favorites. He did good interior illustrations and covers. Earl Norem is another one. I actually found a Reader’s Digest that had Earl Norem illustrations. He worked for Reader’s Digest in the 1990s. I picked up a collection of Reader’s Digest magazines and started looking through them and saw some good art and said ‘Oh wow, this is Earl Norem!’ In terms of subjects, I guess especially like some of the GGA [Good Girl Art] covers with women in them and some of the military aviation covers.

You’re also a comics collector and expert and in DEVINE’S GUIDE you wrote about the connections between comic books and men’s adventure magazines.

DEVINE: There were a lot of connections, including artists who worked for both genres and publishers who were both major publishers of comics and men’s adventure magazines. One of the best known examples is the connection between Marvel Comics and the great Atlas/Diamond men’s adventure magazines, like FOR MEN ONLY, MALE, MEN and STAG. They were all published by Martin Goodman [under the umbrella of his Magazine Management company]. Goodman companies also put out paperbacks, the Lion Publishing series. Goodman’s companies would fill the newsstands with magazines, comic books and paperbacks. They were prolific, especially in the ‘40s and ‘50s. Martin Goodman also had a big line of all-fiction pulp magazines starting in the ‘30s. Other early comics publishers like ‘Busy’ Arnold and Stanley Morse also published a lot of men’s adventure magazines after the Comics Code came in. 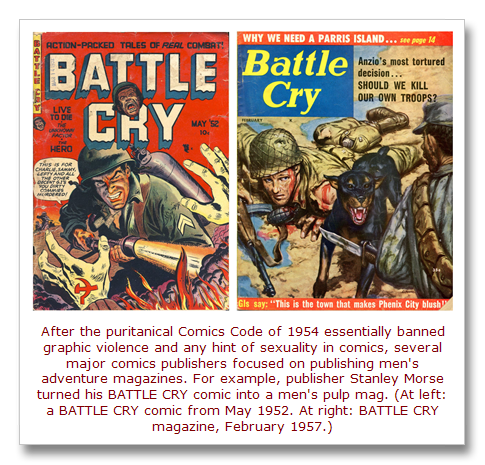 Before the Comics Code of the mid-1950s essentially banned sexy or violent images in comics, many comics readers were young men in their twenties and thirties and a lot of the comics covers looked like men’s adventure magazine covers.

DEVINE: No, it didn’t. When you look at some of the late men’s adventure magazines from the mid-1970s, like late Seventies issues of STAG and FOR MEN ONLY, they weren’t anything special to anybody. They were missing the marketplace. They weren’t quite giving the readers what HUSTLER was, and they weren’t holding on to their original readers who wanted to read war stories.

In the 1940s and 1950s, before the Comics Code, there were a lot of action, adventure, horror and war comics with covers that have scenes much like those on men’s adventure magazines. They had “Good Girl Art” style covers, bloody war scenes, even bondage and torture scenes.

DEVINE: True, though the art was a little bit simpler. They weren’t painted covers, not lush paintings, like the digest pulps and men’s pulp mags had. They were line drawings that were colored. But Golden Age comics of the ‘40s and early ‘50s had a lot of covers that were similar to the digest pulps and men’s adventure magazines. Especially during World War II, some of the comics had Nazis or Japanese soldiers torturing women, and there would be Captain America and Bucky or some other hero coming to the rescue. Very sensational. [See the examples shown in this previous post about Syd Shores, who was both a comics and men’s adventure artist.]

The men’s adventure magazines published in the 1950s don’t have many Nazi bondage and torture covers. The Nazi covers seemed to become popular in the 1960s. Do you have any theories on why?

DEVINE: In part I think it’s because there was a general surge of interest in Nazis in the ‘60s. There were famous Nazis who were finally being captured, like Adolf Eichmann. I remember his capture in 1960 and his trial in 1961 made a lot of news. The search for Nazi war criminals was a big thing. Where is Martin Bormann? He’s in Paraguay or someplace. Where’s Josef Mengele? Things like that. So, the men’s adventure magazine publishers, especially the ones that published the ‘sweat mags’ like MAN’S STORY, ALL MAN and others had a lot of the Nazi covers and stories that were sensationalizing all this. On newsstands, you would see a newspaper with the latest news about the Eichmann trial and near that was a men’s adventure magazine with a cover showing some Nazis torturing scantily clad women. Eventually, those types of covers ran their course. Now, they’re popular collectors’ items and there’s still a big audience for things about Nazis in general.

Of course, the covers with evil Nazis are very politically incorrect. But, as you mentioned, many readers of men’s adventure magazines were American military veterans. So, despite what some critics say, I don’t buy the theory that the magazines were “glorifying” Nazis or that the readers identified with them.

DEVINE: They didn’t. The Nazis were portrayed as evil. You don’t identify with an evil Nazi, you identify with the hero that’s going to save the damsel in distress from the Nazi.

When you wrote the Guide back in the late 1990s, you estimated there were about one hundred to two hundred serious collectors of men’s adventure magazines in the U.S. Do you think there are more now?

DEVINE: I’d say now there are maybe three hundred or four hundred serious collectors. And, there are always some new people starting up collections.

Do you have any tips for someone who wants to start a new collection from the ground up?

DEVINE: Do some networking with existing collectors. Make it known that you’re looking to buy. Watch eBay constantly. Be prepared to spend a lot of money. As time passes, this stuff becomes harder to get.

This is the end of my interview with Bill Devine. Thanks again to Bill for doing the interview and for all the pioneering research he did about men’s adventure magazines.

An interview with Bill Devine, author of DEVINE’S GUIDE TO MEN’S ADVENTURE MAGAZINES…