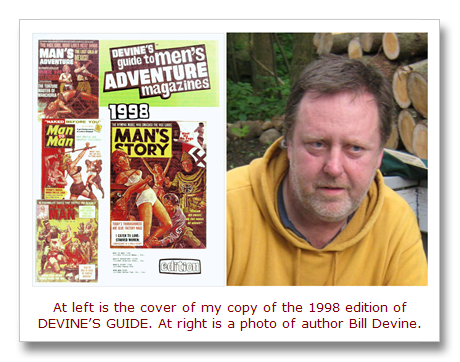 I first got into collecting vintage men’s adventure magazines in 2003, after I read one of the two must-have books about the genre, IT’S A MAN’S WORLD by Adam Parfrey, which was published that year. (The other must-have book is Taschen Publishing’s MEN’S ADVENTURE MAGAZINES, which features the art and magazine collection of Rich Oberg, who is now a friend of mine and a collaborator on this blog.)

In the back of Adam Parfrey’s book there’s a condensed version of a publication titled DEVINE’S GUIDE TO MEN’S ADVENTURE MAGAZINES.

This condensed version provides a list of more than 130 men’s adventure periodicals and key facts about each, such as the publishers and dates of publication. After seeing it, I decided to try to find a copy of the complete DEVINE’S GUIDE.

It took me years to find one and it was expensive to buy. But by that time I was hooked on collecting men’s pulp mags and to me it was worth it. 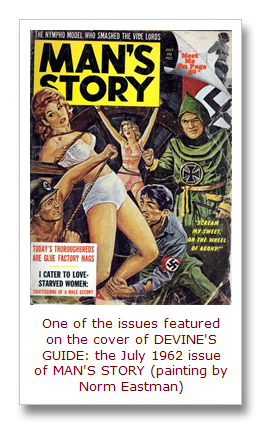 DEVINE’S GUIDE is the first — and, at present, still the only — guide to men’s adventure periodicals. It was written and printed in the late 1990s by a collector of comics, vintage magazines and antiques from Bath, Maine named Bill Devine.

The print version includes a lot of interesting information that’s not in the condensed version published in IT’S A MAN’S WORLD.

In addition to key facts about each magazine, the print version includes several sections Devine wrote about the history of men’s adventure magazines. It also includes a long list of artists who did cover paintings and interior illustrations for the genre, with notes on the titles they worked for most frequently.

After I finally found a copy of DEVINE’S GUIDE and read it, I was awed by the incredible amount of research that had clearly gone into creating it.

A few months ago, I decided to track down Bill Devine and talk to him about his guide. After some initial conversations, I asked Bill if he’d be willing to make a digital version of DEVINE’S GUIDE available to readers of this blog as a joint venture and if he’d do an interview with me.

He said ‘yes’ to both requests.

You can now download a PDF copy of the complete DEVINE’S GUIDE TO MEN’S ADVENTURE MAGAZINES via my Payloadz store. (Half of the $9.99 cost helps keep this blog alive, so for fan of men’s pulp mags there are two good reasons to buy a copy.)

I’m posting the phone interview I did with Bill here in two parts. The first part, transcribed below, focuses on how he came to write his guide… 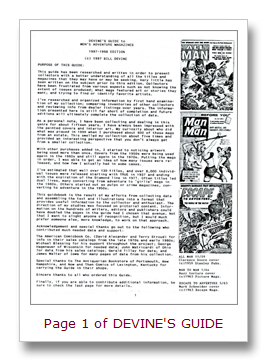 Bill, thanks a lot for talking with me. I used to live in Maine myself. Is that where you grew up?

DEVINE: Yes, I lived in Bath, Maine as a kid in the 1950s. Then my family moved to the suburbs of Boston and I spent my teenage years there. I moved back to Maine about 15 years ago. I’m actually living in the house that I lived in back in the Fifties. It remained in the family and got handed down to me.

We’re about the same age. When I was a teenager in the Sixties I was only dimly aware of men’s pulp mag. Were you into them back then?

DEVINE: Not as much as I would be later. My dad was a veteran and a collector of World War II  souvenirs and he brought some men’s adventure magazines home occasionally. Not the ones with the Nazi bondage covers. He liked the titles like MALE, MEN and FOR MEN ONLY, the Atlas/Diamond group titles that had a lot of World War II stories and came under the umbrella of Martin Goodman’s Magazine Management company. 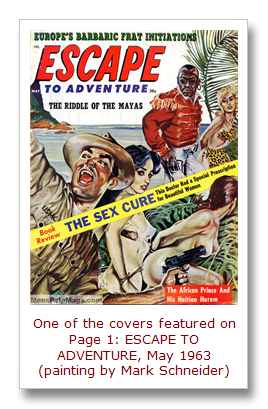 Did you notice men’s adventure magazines on the newsstands in the Sixties?

DEVINE: When I was young teen in Boston I bought comics at newsstands. They were at a kid’s level. The men’s magazines, the sweat mags, were always at a higher level, so I never really noticed them that much. I remember seeing them more at barber shops. When you got a haircut at the barber shop in those days there were often a lot of men’s adventure magazines laying around for customers to read. So, you’d be sitting down for a half hour waiting for the barber to cut your hair, reading those magazines. That was probably my biggest early exposure to them, in barber shops.

When did you start collecting them?

DEVINE: Well, in my teen years, I started collecting comic books. When I graduated high school I started to notice Playboy and other men’s magazines. That’s when I started seeing all the great covers on the men’s adventure magazines. So I’d buy some occasionally and read them. I didn’t save them in the beginning. It wasn’t until the late ‘70s and early ‘80s that I started seeing them at the comic book shows and realized that people were paying big money to collect them — well, big money back then, which was only two or three dollars. 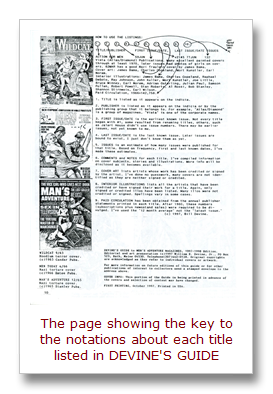 You were a serious comics collector?

DEVINE: Oh yeah, very serious and I still have a collection. I was partly inspired to collect men’s adventure magazines after meeting David T. Alexander, who founded the legendary American Comic Book Company in Los Angeles with Terry Stroud in 1970. I remember I went out there with a friend of mine to the San Diego Comics convention and we spent a couple of days at David’s house, with him and Terry Stroud. They had a house in the hills of old Studio City and their house was full of old comic books and vintage magazines, including a lot of old men’s adventure magazines. It was just a treasure trove of stuff to look through.

As you probably know, David is in Tampa now and has the David T. Alexander Collectibles “Culture and Thrills” website. That site, and his store on eBay, are two of the best places to find high quality copies of men’s adventure magazines. 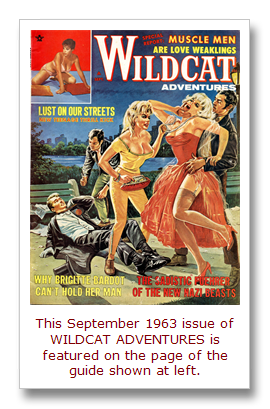 DEVINE: Yeah, they always had the goods, the prime comic books, the Golden age stuff, and the men’s adventure magazines and other men’s magazines from the 1950s and 1960s. They had stuff that nobody else had.

My copy of DEVINE’S GUIDE is the 1998 edition. The introduction says that at that point you had been collecting men’s adventure mags for about 15 years.

DEVINE: I may have had some before that. I remember there was one comic book dealer who showed up in Boston in the early 1970s who had 30 or 40 copies for a couple of bucks each. I thought they were great so I bought all he had. That’s when I started to put together a collection and realize how many different titles there were. I started looking for them at that point.

The intro says you stared working on your guide after you got a big collection from an estate. 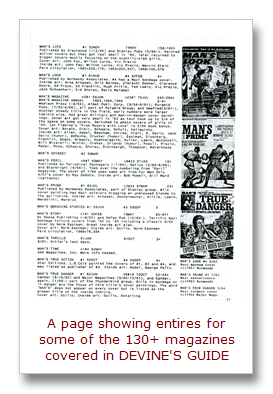 DEVINE: There used to be a bookstore and newsstand I went to in Boston in the Seventies called Corn Hill Magazines. The owner’s name was Larry Rideout. By the 1990s, the store had closed and he was getting old. He was just setting up in flea markets. But he still had this incredible warehouse full of old books, comics and magazines. I used to go to his warehouse on Saturdays to find stuff for my collection. Then, I started selling for him on consignment at the comic book shows. In 1996, he passed away unexpectedly and I still had a bunch of his comics and magazines, but his brother said to just keep them. That’s how I ended up with about six or seven hundred men’s adventure magazines all at once, which increased my collection about fivefold. About that time, I moved back to Maine and started writing the guide. I was doing mail order then. Selling comics and magazines full time. I also had baseball cards and other collectibles.

How many editions of DEVINE’S GUIDE did you do? 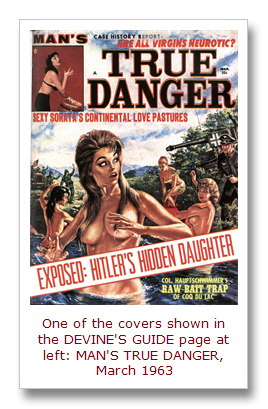 DEVINE: There was a preview copy in 1997. Then there was a 1998 edition that had some updates based on things I had learned.

You printed the copies yourself?

DEVINE: I typed the pages up on my computer and printed out a master. Then I went to Staples and Xeroxed all the inside pages. I made about a hundred sets of inside pages at a time. I made the covers in color on a color photo copier I had. I would put together 20 or 40 complete copies at a time and use different magazines on the covers of each set, so there are probably about 10 different covers. I sold them by mail order and sold a few wholesale orders to some stores. When it was time to print another batch, I’d put together another a new cover with a different assortment of magazines on the front.

Do you know how many copies you published?

Well, I have a treasure then.

DEVINE: Yeah, I guess you do. I keep meaning to reprint it. But the original computer I had all the data on got trashed, so all the data is gone. I’d have to start from scratch all over again.

This is the end of Part I of my interview with Bill Devine. Here’s a link to Part II.

If you don’t want to spend years trying to find an original copy of DEVINE’S GUIDE TO MEN’S ADVENTURE MAGAZINES, like I did, you can buy the PDF copy Bill Devine has allowed me to make available in the MensPulpMags.com virtual newsstand.

Your purchase will also help keep this blog alive, since Bill shares the profit 50/50 with MensPulpMags.com.

The Bruce Minney Interview– Part 2: “Sweat Magazines,” paperbacks and beyond…