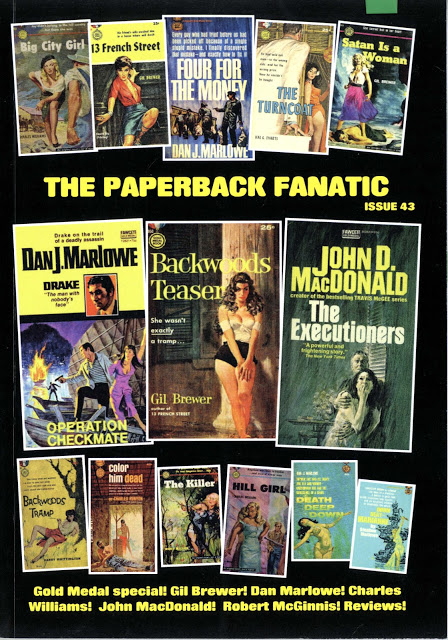 As you can tell from my previous posts about vintage paperback expert and pop culture historian Justin Marriott, I’m a bit in awe of him. He’s incredibly knowledgeable and incredibly prolific. He currently publishes six different, terrific fanzines and writes a large percentage of the articles in them.

The oldest, first published in 2007, is THE PAPERBACK FANATIC, a wide-ranging publication about various types of vintage paperbacks from the ‘50s, ‘60s and ‘70s and the writers, artists, editors and publishers who created them.

In the years since them, Justin has launched five additional fascinating, lushly-illustrated fanzines: THE SLEAZY READER, which covers the “sleaze paperback” subgenre; PULP HORROR, covering books and other media in the realm of horror and the supernatural; MEN OF VIOLENCE, the first fanzine to focus on vintage men’s action/adventure novels and magazines; MONSTER MANIACS, a fanzine devoted to vintage horror comics and magazines; and, HOT LEAD, a new zine about Westerns that Justin created with Paul Bishop.

Paul is a novelist, pulp fiction historian, blogger and publisher I’ve also written about in previous posts here. In recent years, he has added Western novels, movies and TV shows to his realms of knowledge. During the past couple of years, he has co-edited three books about them: 52 WEEKS • 52 WESTERN NOVELS, 52 WEEKS • 52 WESTERN MOVIES, and 52 WEEKS  • 52 TV WESTERNS. And, he recently launched the new website about Westerns SixGunJustice.com and a weekly Six Gun Justice podcast. 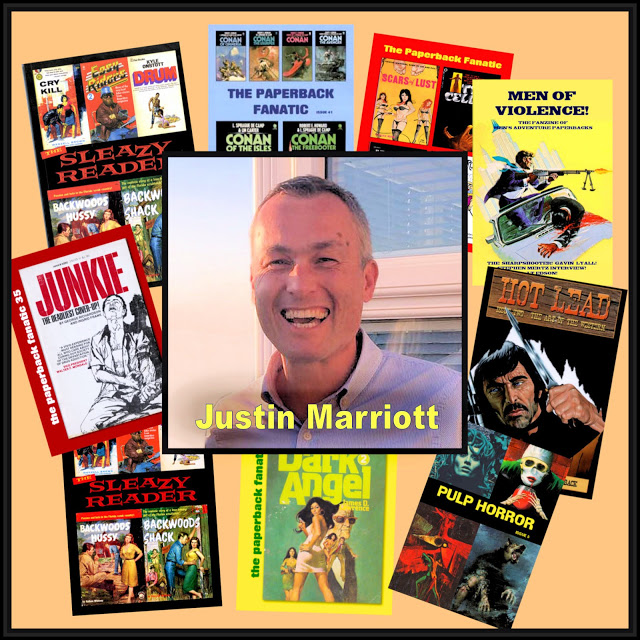 He also included an article by his long-term collaborator and fellow paperback maven, Rob Matthews, an interview with my co-editor of the Men’s Adventure Library book series, Wyatt Doyle, and a set of “Book Bonus” men’s adventure magazine scans I provided.

The Gold Medal Books line was created in 1950 by Fawcett Publications. Before that, paperbacks were softcover editions of hardcover books. Fawcett was a pioneer in publishing paperback originals. Its Gold Medal line attracted many of what are now considered to be the best pulp fiction writers of the 1950s, 1960s and 1970s, as well as many top illustration artists.

“Book Bonus” versions of many Gold Medal books were often featured in those mags and in MAMs created by other publishers, such as Martin Goodman’s Magazine Management company (ACTION FOR MEN, FOR MEN ONLY, MALE, MAN’S WORLD, MEN, STAG, etc.).

Another overlap between Gold Medal and the MAM genre is the fact that some Gold Medal novelists made extra money writing stories for MAMs.

Moreover, some of the best artists who did paperback cover art for Gold Medal and other mid-20th Century paperback publishers produced cover art and interior illustrations for men’s adventure mags.

That brings up one of the things I especially admire about Justin Marriott’s fanzines. Whenever he’s able to ID the cover artist for a book, he names them in the cover scan captions.

This is not only significant to me because I’m an illustration art fan. It’s also significant from a paperback history perspective, since cover art was often a main reason why people bought paperbacks in the ‘50s, ‘60s and ‘70s, before (sadly) publishers started depending on the use of staged or stock photos and big-ass text on their covers.

Books in that article feature cover art by several great artists who did both paperback covers and artwork for MAMs, most notably Mitchell Hooks, Robert McGinnis and Barye Philips. 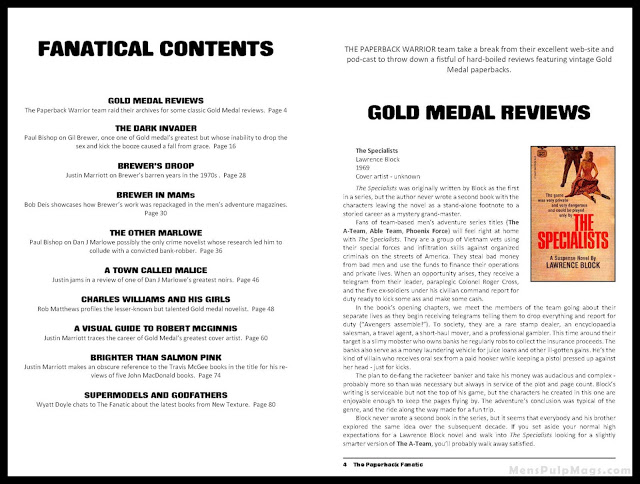 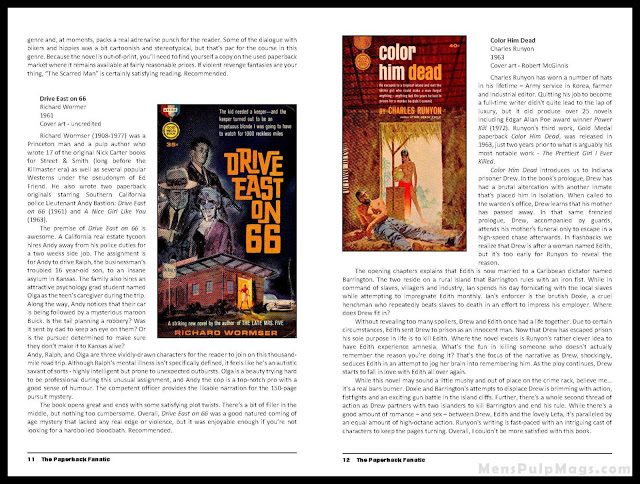 The next article in this issue, “THE DARK INVADER,” is Paul Bishop’s fascinating look at the books and troubled life of writer Gil Brewer.

Brewer became one of Gold Medal’s star authors in the ‘50s. Unfortunately, his career was derailed by alcohol and mental illness in the ‘60s. Even after that, he kept churning out crime and “sleaze” paperbacks, TV tie-in novels and magazine stories, under his own name and pseudonyms. He died in 1983 at age 60, due to the health impacts of long-term alcoholism. By the way, the smaller cover on the page shown at right below is Brewer’s novel THE GIRL FROM HATEVILLE (1958) and is one of the early paperback covers done by Samson Pollen, whose original men’s adventure magazine paintings are featured in our books POLLEN’S WOMEN and POLLEN’S ACTION.

In the following article, aptly titled “BREWER’S DROOP,” Justin Marriott discusses novels Brewer wrote under pseudonyms in the 1970s, as his physical and mental health declined. 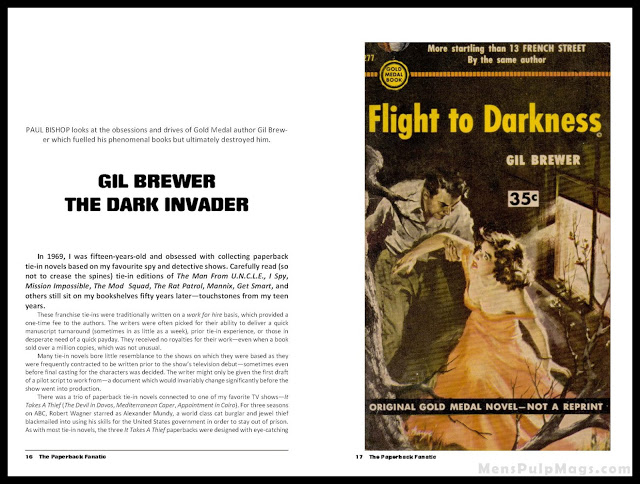 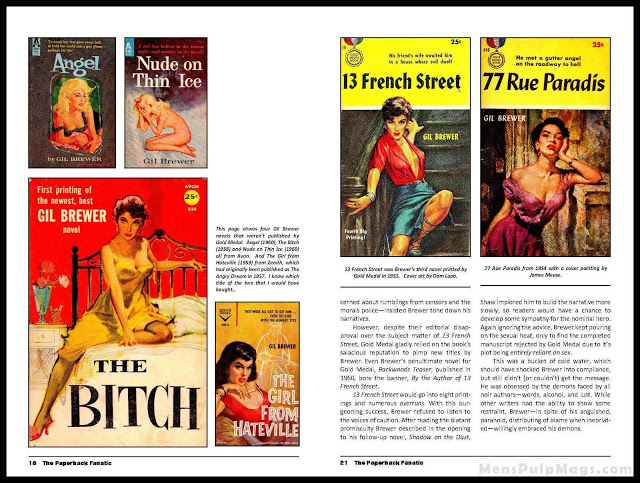 Next is “BREWER IN MAMs,” a set of scans of “Books Bonus” adaptations of Brewers novels in men’s adventure magazines from my collections. Like most other such book adaptations in MAMs, they feature cool artwork.

The examples of MAM versions of Gil Brewer novels in PAPERBACK FANATIC: ISSUE #43, include three with artwork by the great paperback cover and MAM illustration artist Charles Copeland: “BACKWOODS TEASE,” from MEN, February 1964, a version of Brewer’s novel BACKWOODS TEASER (1960); “KILLER’S LOVE SLAVE,” from MEN, September 1966, a condensed version of THE HUNGRY ONE (1966); and, “HOUSE OF CAPTIVE WOMEN,” from MALE, January 1957, a condensed version of A KILLER IS LOOSE (1954). 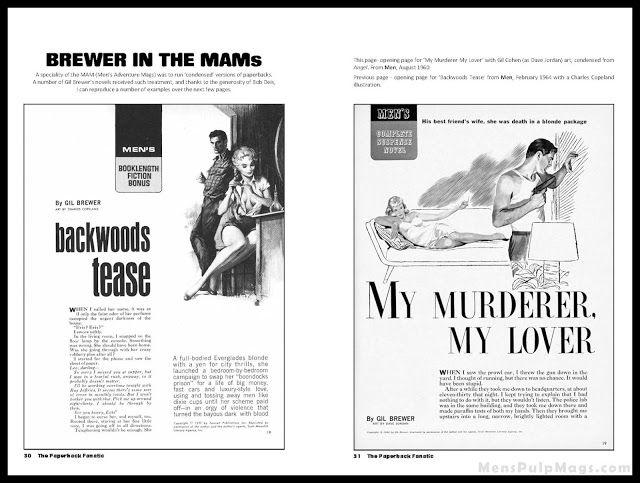 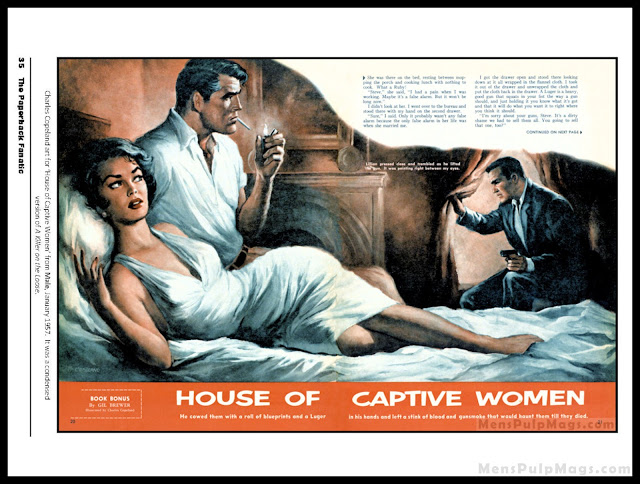 Two examples feature artwork by the equally great paperback cover and MAM illustration artist, Gil Cohen, who went on to become of the world’s top military aviation artists. As noted in the interview I did with him for this blog, Gil is especially known to action/adventure paperback fans as the main cover artist for the first 200 novels in the Executioner/Mack Bolan series created by Don Pendleton. (As I write this, we are nearing the release date for a new book in our Men’s Adventure Library series that will showcase Gil’s original cover paintings for that series.)

The MAM “Book Bonus” stories with Gil Cohen illos shown in PAPERBACK FANATIC: ISSUE #43 are “MY MURDERER MY LOVER,” from MEN, August 1960, a condensed version of Gil Brewer’s novel ANGEL (1959), with the artwork credited to Gil’s occasional pseudonym, Dave Jordan, and “THAT FRENCH ST. WOMAN,” from MAN’S WORLD, February 1964, a short version of Brewer’s 13 FRENCH STREET (1951). 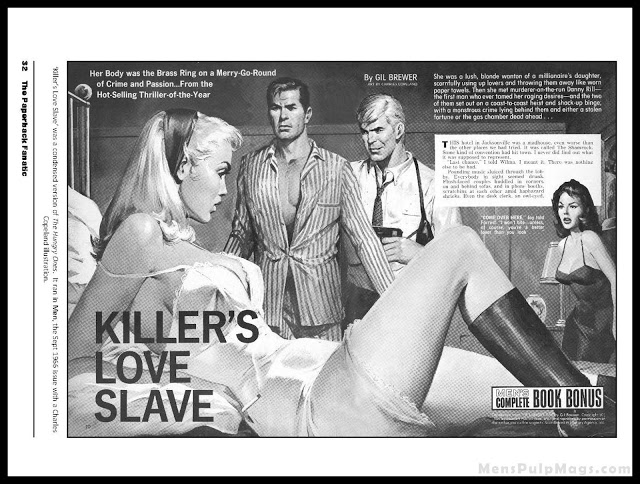 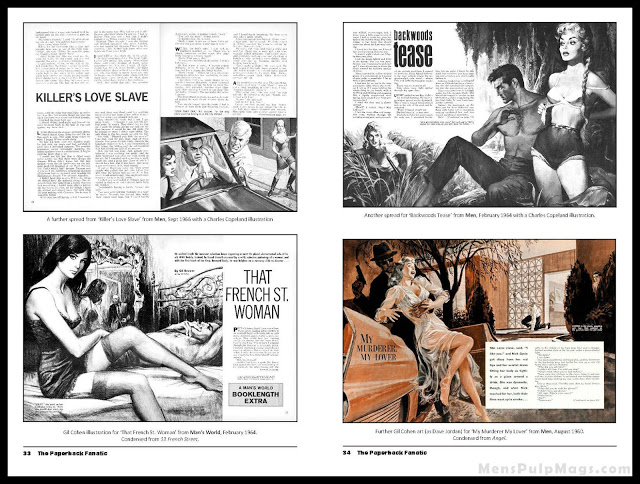 The title “THE OTHER MARLOWE” refers to the common confusion between Dan Marlowe and Stephen Marlowe, a popular writer of mystery and science fiction novels, and Raymond Chandler’s fictional Private Investigator Philip Marlowe.

As Paul explains (and as recounted at length in Charles Kelly’s biography of Marlowe, GUNSHOTS IN ANOTHER ROOM), Dan J. led a genuinely strange life. He was friends and a writing collaborator with convicted bank robber and former member of the FBI’s Most Wanted list, Albert F. Nussbaum. He was into strange sexual fetishes. He also suffered from recurring migraines and amnesia. Despite those and other personal issues, Marlowe was a talented writer and his novels are revered by many vintage crime and mystery aficionados, especially his series featuring the amoral thief and bank robber Earl Drake. 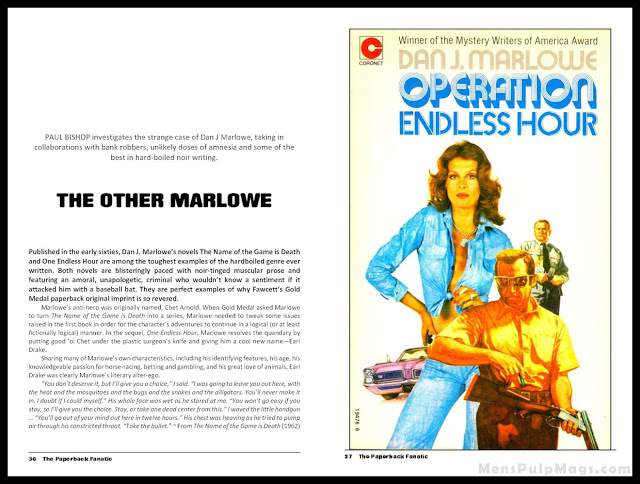 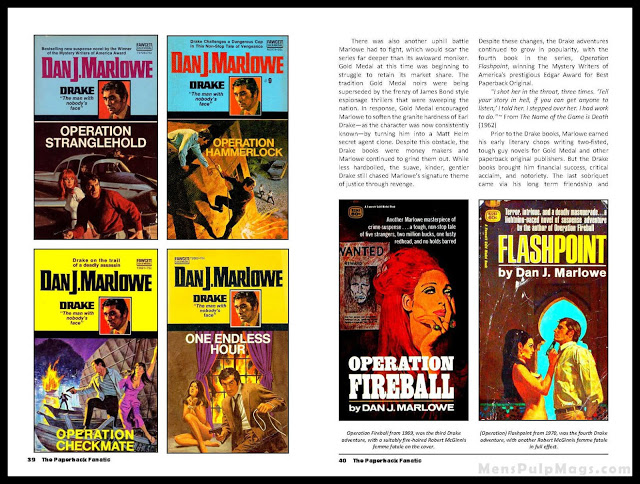 In his article, Paul notes why two of the best-loved novels among Marlowe fans are the Drake novels THE NAME OF THE GAME IS DEATH (1962) and OPERATION ENDLESS HOUR (1969).

The next article by Justin Marriott delves into the third of the top three fan favorite Marlowe novels, THE VENGEANCE MAN (1966). This is not a Drake novel. Indeed, the lead character, Jim Wilson, is even more amoral than Drake. He’s a murderer who kills his wife and a sociopath who winds his way through a small town full of back-stabbers, nymphomaniacs, and other sociopaths.

That’s followed by Rob Matthews’ article about one of Gold Medal’s lesser-known crime novelists, Charles Williams. It sheds light on why other top crime writers consider Williams to be one of the best. In fact, as Rob notes, acclaimed novelist and anthologist Ed Gorman once wrote “if you’ve never read Charles Williams then you’ve never read American noir’s most important neglected writer.”

Rob includes what may be the first complete Charles Williams bibliography, a daunting task given the many variant titles of his novels that have been published over the years. 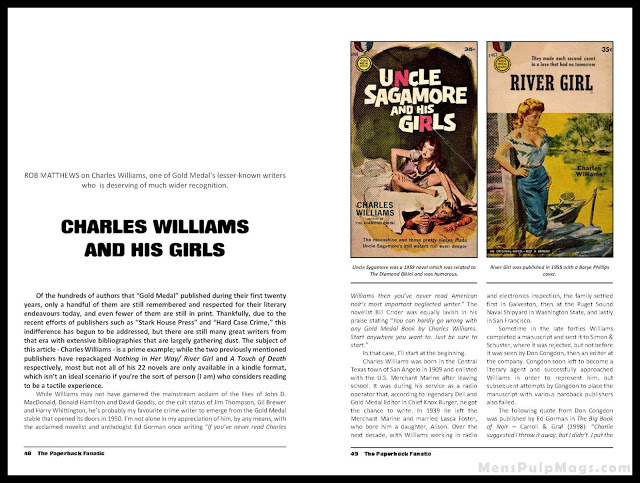 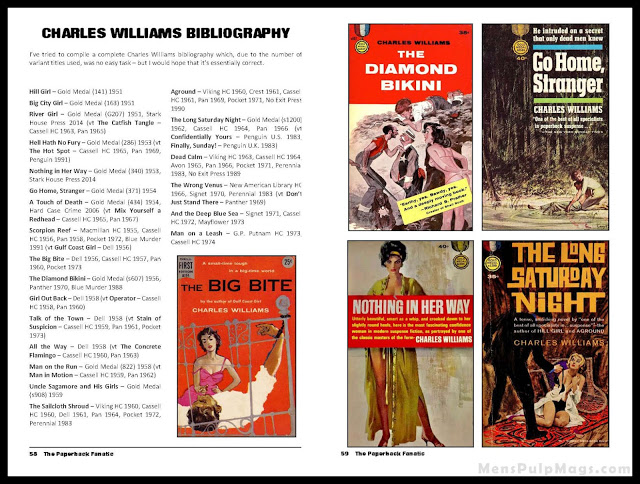 Next, Justin Marriott provides an overview of the paperback cover of Robert McGinnis, one of the most famous of all American illustration artists. Justin picked 26 covers McGinnis did for Gold Medal paperbacks, arranged in chronological order and accompanied by overviews of each novel. 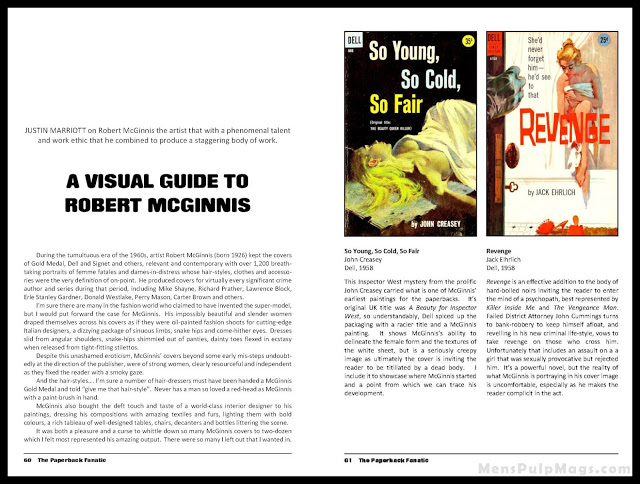 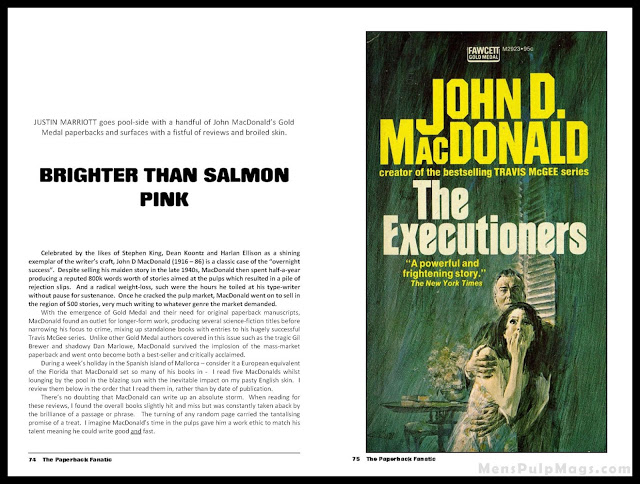 I give Justin himself a gold medal for the final entry in PAPERBACK FANATIC: ISSUE #43. It’s an interview with the head of the New Texture book and CD publishing imprint, Wyatt Doyle, my co-editor for and graphic designer of the books in our Men’s Adventure Library series.

In the interview, Wyatt discusses our two latest books. The most recent is our book featuring original men’s adventure magazine paintings by one of the greatest illustration artists who worked for that genre — and any other — Mort Kunstler. It’s titled MORT KÜNSTLER: THE GODFATHER OF PULP FICTION ILLUSTRATORS. You can read more about that one and see a preview in my previous post at this link.

Not long before we published the book showcasing Mort’s MAM artwork, we published EVA: MEN’S ADVENTURE SUPERMODEL. It focuses on the life of the legendary artist’s model, pinup photo model and actress Eva Lynd. You can read more about that book in the post here and see a video preview here. 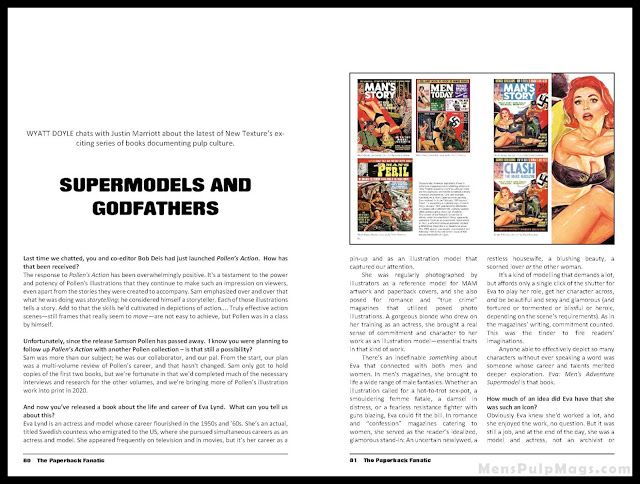 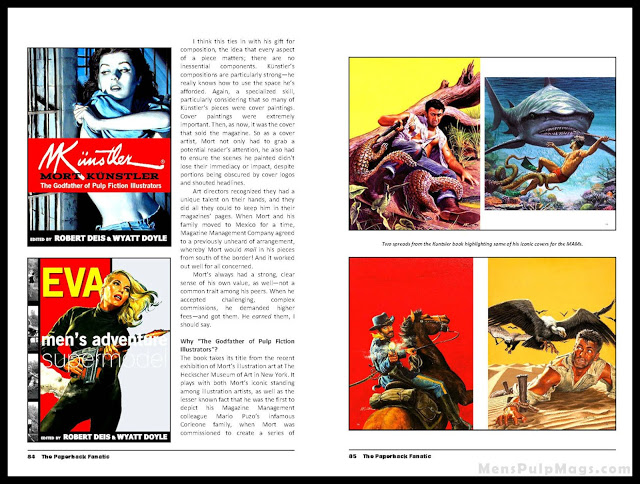 Thanks to Justin for his continued support for our indie publishing efforts and congrats on another great issue of THE PAPERBACK FANATIC.