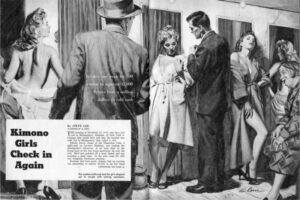 To men’s adventure magazine collectors, Eva Lynd is best known — by sight if not by name — as a favorite model of artist Norm Eastman.

She appeared on many of the classic cover paintings Eastman created for the “sweat magazine” subgenre of men’s pulp mags, including MAN’S BOOK, MAN’S EPIC, MAN’S STORY, MEN TODAY, NEW MAN and WORLD OF MEN (published by the Reese and EmTee companies).

On those covers, Eva usually “played” the iconic, scantily-clad damsel in distress being tortured by some evil Nazi or saved by some heroic GI.

Often, the sadistic fiend or hero was modeled on Steve Holland — the favorite male model of Eastman and many other illustration artists in the 1950s and 1960s.

In recent weeks, I’ve had the pleasure having an ongoing email dialogue with Eva about her varied and fascinating career as a model and actress. And, every week she has been surprising me with some new revelations.

For example, although I was aware of her modeling work for Norm Eastman, I didn’t know she had also modeled for some other famous illustration artists of the 1950s and 1960s.

Then one day she sent me a photo of an age-browned, two-page interior spread from a men’s adventure magazine that she had pasted in the pages of an equally age-browned scrapbook.

It was used for the story “KIMONO GIRLS CHECK IN AGAIN” in the May 1957 issue of KEN FOR MEN, one of the Diamond/Atlas magazines published by Magazine Management. 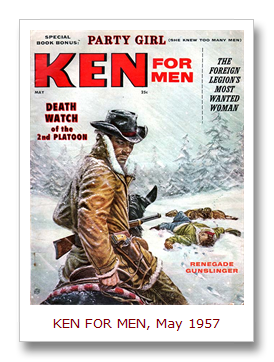 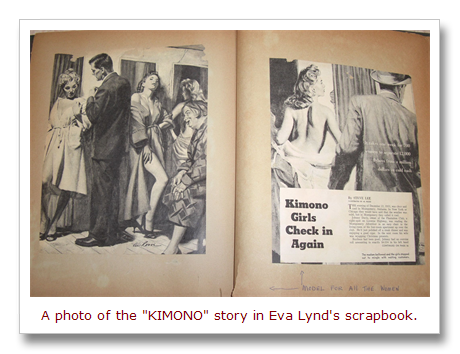 I asked Eva what she got paid for being an artist’s model in the late ‘50s.

“The going rate to model for illustration artists artist like Al and Norm back then was 25 dollars an hour,” Eva recalled. “And I was glad to get it.” (Indeed, $25 in 1957 adjusted for inflation would be about $200 today.)

Rossi did many illustrations for men’s adventure magazines. But he is probably best known for the cover paintings he did for risqué pulp paperbacks, including those that are sometimes derisively — and lovingly — referred to as “sleaze paperbacks.”

The most famous pulp paperback with a cover painting by Al Rossi is the 1953 Ace Double paperback edition of William Burroughs’ early novel JUNKIE (Ace D-15), published under the pseudonym William Lee. Rossi also did the cover painting for NARCOTIC AGENT, the book on the flip side of this now highly-valuable Ace double. 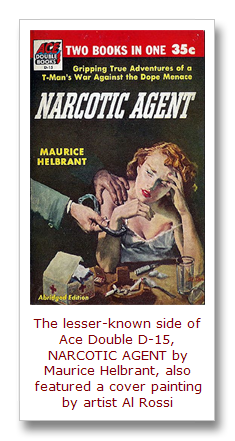 Until Eva told me, I didn’t know she had modeled for Rossi and she had almost forgotten it herself.

As Eva and I began exploring some of Rossi’s work it became apparent that he had used her for both men’s adventure illustrations and paperback cover paintings.

For example, Eva sent me a photo of another old tearsheet from a men’s adventure magazine that showed half of a two-page spread by Rossi, featuring a “close-up” of her. Though she didn’t recall what it was from, I was able to track it down. 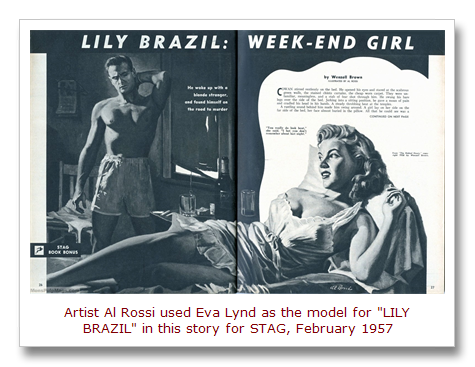 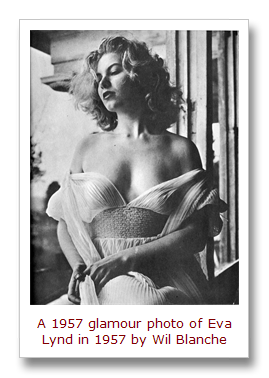 It was used for a cool, noir-style story in the February 1957 issue of Magazine Management’s flagship periodical STAG.

Titled “LILY BRAZIL: WEEK-END GIRL,” it was excerpted from the 1956 paperback THE NAKED HOURS by Wenzell Brown. The novel featured a cover by Ray Johnson — another great illustration artist who did artwork for men’s adventure magazines during part of his career.

You can tell that the man in Al Rossi’s illustration for STAG is not based on Steve Holland and Eva didn’t know who he was. You can also tell from the subhead that he’s in big trouble: “He woke up with a blonde stranger, and found himself on the road to murder.” 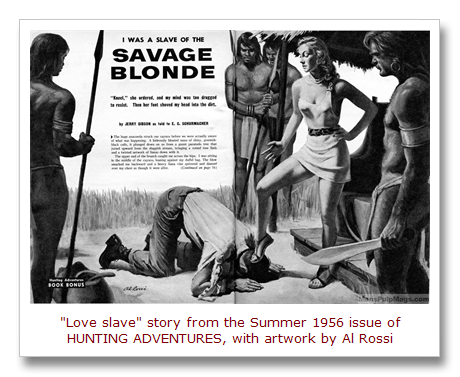 Eva also appears to be the model Rossi used for the imperious white jungle queen character in his illustration for “I WAS A SLAVE OF THE SAVAGE BLONDE.”

That wild, highly-entertaining “love slave” yarn was originally published in the Summer 1956 issue of HUNTING ADVENTURES.

It’s one of the classic men’s adventure magazine stories included in the WEASELS RIPPED MY FLESH! anthology I put together with Wyatt Doyle

I’m currently working with Eva and men’s adventure art maven Rich Oberg to try to ID all of the men’s pulp mag illustrations by Norm Eastman and Al Rossi that feature Eva.

Between Eva’s scrapbook and memories, Rich’s notes from conversations he had with Norm before he died, and the huge collection of men’s adventure paintings and magazines Rich owns, we have a good shot at finding most of them.

Confirming the list of paperback covers that feature Eva as a model will be harder.

“All the paperback books I had with me on the cover got ruined in a rainstorm when there was a leak in our garage a few years ago,” Eva told me.

We do know that Eva was a model for quite a few of Al Rossi’s paperback cover paintings. In fact, Eva sent me a series of intriguing reference photographs that Al Rossi took of her alone and her with Steve Holland.

Several of the photos Eva sent me clearly look like setups for pulp paperback covers. I haven’t been able to figure out which books they were all used for yet. However, I think I have IDed two of them. 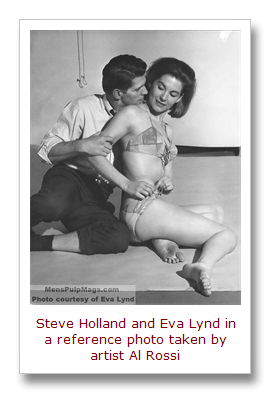 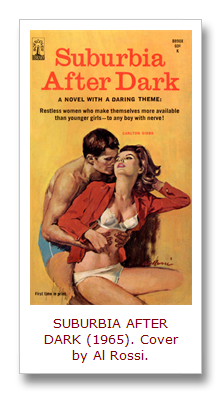 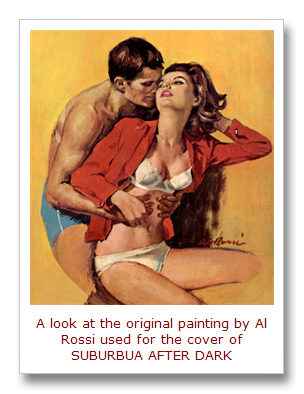 I suspect Rossi used a different shot from that session with Eva and Steve as his reference photo for the SUBURBIA AFTER DARK cover art.

Another Rossi photo Eva sent me is an alluring shot of her on her back, viewed from above. “I don’t know what this became,” Eva said. “But it’s a nice shot.”

After some image searching online, I think I know. It looks to me like that photo came from the modeling session Rossi drew upon for his cover painting for THE EMPTY BED (1966), written by Louis Lorraine. 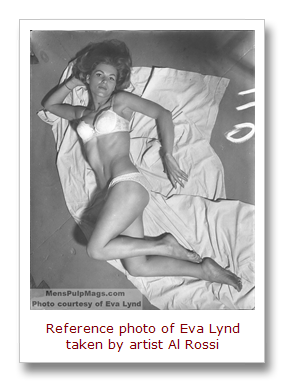 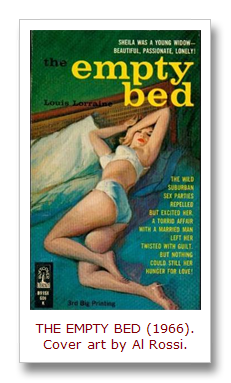 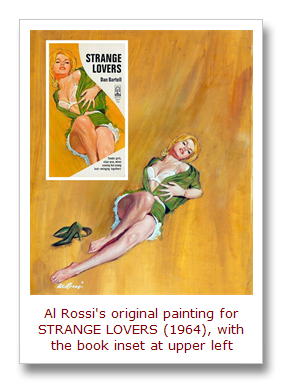 I also believe Eva was the model for a gorgeous Al Rossi cover painting recently offered for sale on the Heritage Auctions site. It was used for the 1964 paperback STRANGE LOVERS, penned by Dan Bartell.

In the meantime, you can read “I WAS A LOVE SLAVE OF THE SAVAGE BLONDE” by buying a copy of the WEASELS anthology — or read “KIMONO GIRLS CHECK IN AGAIN” by clicking this link to download a PDF copy of the May 1957 issue of KEN FOR MEN from the MensPulpMags.com virtual newsstand.