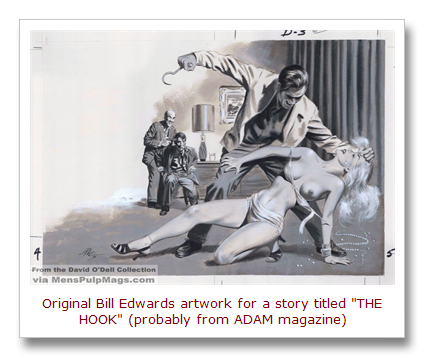 One of the great things about the Facebook group associated with this site is that it has attracted many other knowledgeable fans and collectors of mid-Twentieth Century pulp art and pulp fiction.

Among them is David O’Dell, a California-based graphic designer who has worked for a major high tech firm for over thirty years.

David is also an avid collector of vintage illustration art.

And, recently, David has been wowing members if the Men’s Adventure Magazines Facebook group by posting a series of photos of the Edwards illos in his collection.

However, some are a bit racier and have more explicit T&A than most men’s pulp mag illustrations created prior to the 1970s.

Consider, for example, the example at the top of this post and those below… 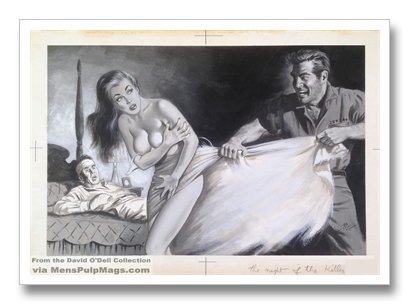 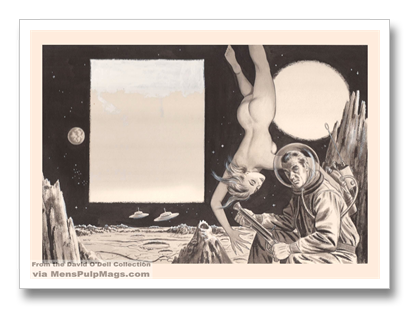 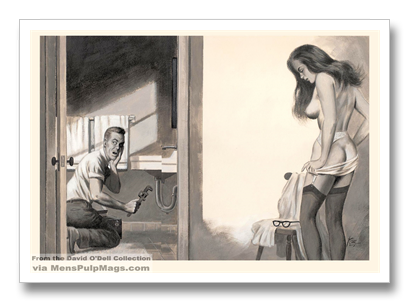 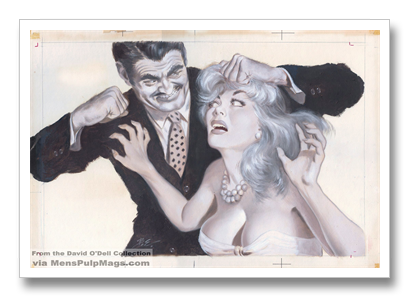 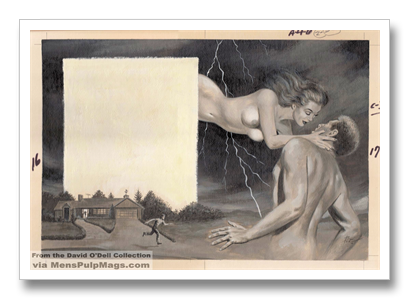 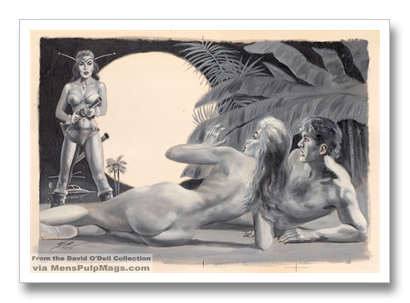 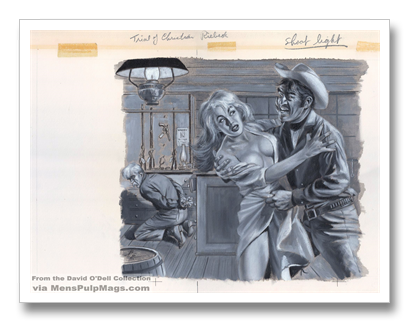 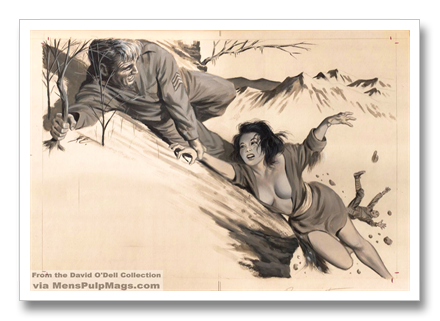 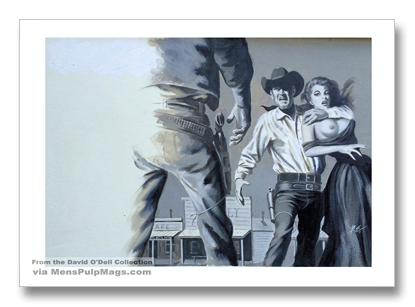 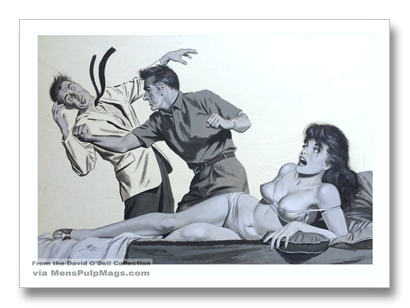 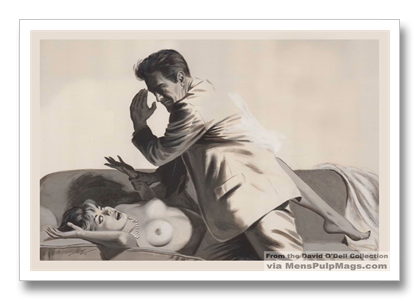 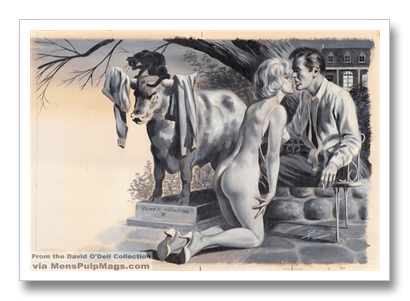 As cool as Edwards’ interior illustrations are — and I think they a very cool — he’s probably best known for the titillating cover paintings he did for “sleaze paperbacks” in the 1950s, 1960s and 1970s.

As noted in a bio written by L. Truman Douglas for the great online fanzine EI, Edwards did hundreds of such covers and they are highly popular among fans of that genre. 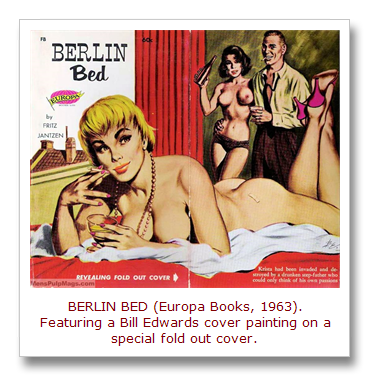 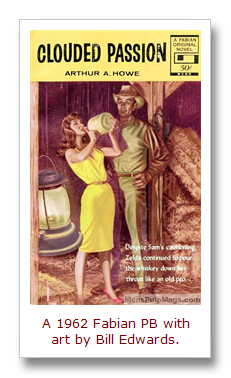 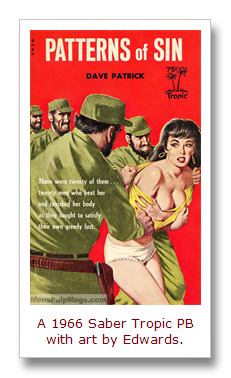 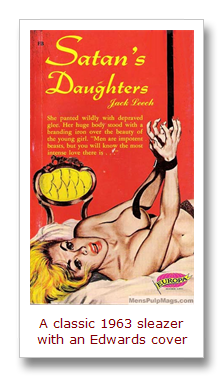 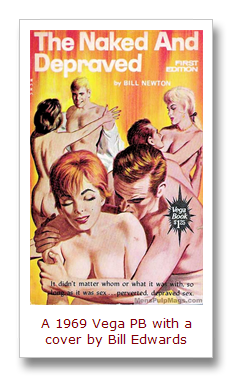 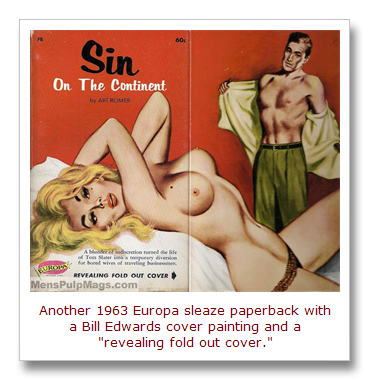 After looking at Edward’s paperback covers and interior illustrations, you might be surprised to find out about some of the other facets of his colorful life.

He was born in New Jersey in 1918, and showed a talent for art as a child. In his teenage years, he spent summers working on ranches in Wyoming and sketching horses and cattle in his spare time. 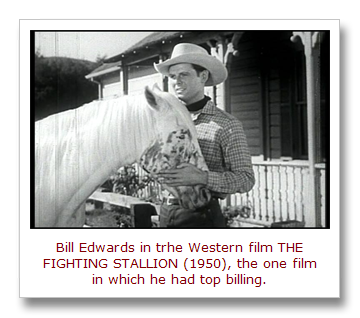 He eventually got good enough at being a cowboy to begin riding broncos and Brahma bulls in the Western rodeo circuit.

After a series of broken bones put an end to his rodeo career, he moved to New York, where he worked his way through art school at the Art Students League. He paid his way by working as a model for the Conover Agency, posing for magazine and catalog artwork and photos.

Around 1940, Edwards’ manly good looks caught the attention of a talent agent who brought him to Hollywood.

The biography of Edwards on IMDB.com notes that he appeared in dozens of movies and TV shows from the early 1940s to the mid-1980s, though he never quite succeeded in becoming a full time or famous actor. 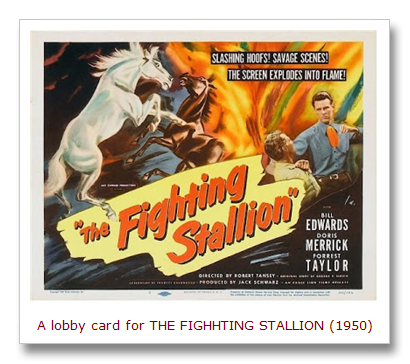 Despite his complete lack of experience, Warner Brothers saw promise in Bill’s blond-haired, blue-eyed good looks and solid-oak build and placed him under contract in 1942. For the first two years he appeared in a number of unbilled parts as reporter and military types in such films as Murder in the Big House (1942), Yankee Doodle Dandy (1942), Escape from Crime (1942), Air Force (1943) and Princess O’Rourke (1943).

Unable to rise above these small parts, he moved to Paramount where he earned his first featured part as Forrest Noble, the mayor’s son who is engaged to Ella Raines in the Preston Sturges classic Hail the Conquering Hero (1944). He then went on play Diana Lynn‘s hunky love interest in Our Hearts Were Young and Gay (1944) and its sequel Our Hearts Were Growing Up (1946) but couldn’t do better than being billed sixth and eighth in the films Miss Susie Slagle’s (1946) with Veronica Lake and The Virginian (1946) with Joel McCrea, respectively.

Freelancing by 1947, Bill found himself cast in primarily “Poverty Row” programmers. He was billed third behind Jane Withers and Robert Lowery in the Pine Thomas production Danger Street (1947) and made use of his cowboy-raised upbringing with the westerns, again third billed in Home in San Antone (1949) starring Roy Acuff, Panorama from a Moving Train on White Pass & Yukon Railway, Alaska (1905) starring Kirby Grant and Border Outlaws (1950) starring cowboy singer Spade Cooley. 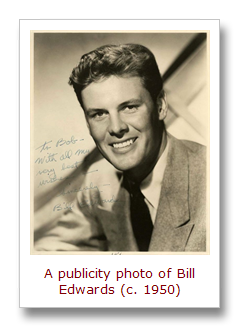 He received his one and only star status in the western The Fighting Stallion (1950) for the Jack Schwarz Productions.

It would have seemed Bill could have continued on as a cowboy star but his acting proved wooden and following a few more years in films and TV guest spots (“Bonanza,” “Dragnet,” etc.), abandoned his career and returned to his first joy — art.

He later became a familiar name in California as an exhibited oil and acrylic painter of the Old West and as an illustrator. A well-known scuba diver and instructor in the Southern California area, he at one time owned a diving and scuba gear shop. Bill also returned to occasional acting in the 1970s and 1980s, notably the film

Long married to Hazel Allen in 1946, the couple had one daughter, Linda. They divorced in the mid 1970s after nearly 30 years of marriage and Bill married Beryl Hunter in the ensuing years. Following their divorce, he remarried first wife Hazel, who survived him. Bill suffered from a disease that attacked his muscular system in his final years and he died of pneumonia in Southern California in 1999 at age 81.

Along the way in his art career, Edwards was given the prestigious honor of being chosen as one of the artists who provided paintings for the US Air Force Art Program.

Sixteen of the paintings he created for that program are still part of the official United States Air Force Art Collection and can be viewed online.

Here are a few of them… 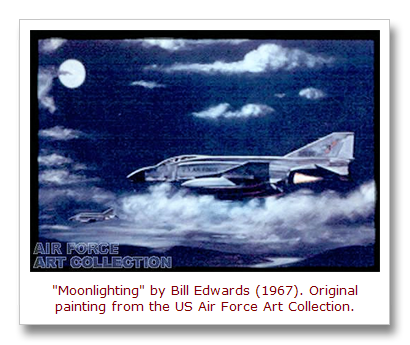 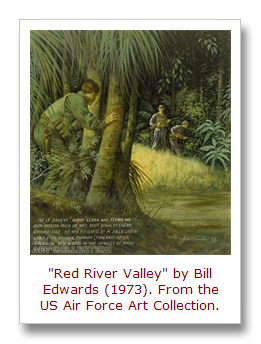 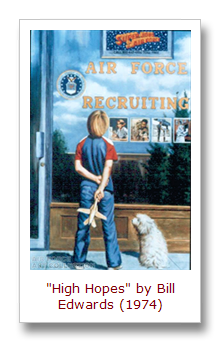 Clearly, Bill Edwards was an intriguing man. Thanks to David O’Dell for helping to make me more aware of him and for allowing me to share the Edwards artwork he owns here.

Earl Norem is gone, but his men’s adventure and comics artwork is immortal…