The previous post here focused on Marion Michael, star of the 1956 cult film Liane, Jungle Goddess. Marion is one of the two famous “jungle girls” featured in the premiere issue of South Sea Stories, published in July 1960. 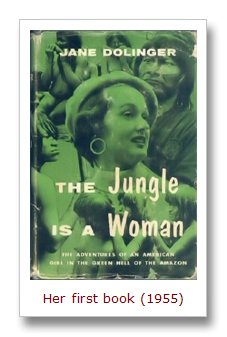 The other is Jane Dolinger, one of the most interesting woman associated with men’s adventure and bachelor magazines of the 1950s and 1960s.

She’s the only woman who was both a pin-up model and a writer of exotic travel and adventure stories for vintage men’s mags.

Her nickname back then was “Jungle Jane” and she was called “the most glamorous travel writer in the world.”

More recently, she has been called “a real-life Lara Croft” and a “female Indiana Jones.”

During her remarkable career she wrote more than 300 magazine stories and eight books.

Dolinger may be best known for the ongoing series of exotic/erotic adventure articles she wrote for the girlie mag Modern Man from the late 1950s to the late 1960s. These typically featured on-location or staged photos of Jane in scanty native garb or other revealing story-related costumes.

As noted on the excellent, retro-oriented site Java’s Bachelor Pad (a site that I highly recommend):

“Month after month for, Modern Man readers were treated to Jane Dolinger’s globe-trotting accounts as well as a healthy dose of cheesecake posed in exotic locales. She was the all-American girl who faced danger and found adventure no matter where she landed. One month she would be Queen of the Amazon, the next she was in the middle of a Voodoo ceremony, and then it was off to a Moroccan harem. No matter where she was, she always looked great whether draped in leopard skins, wrapped in South American tapestries, or dressed as a Egyptian princess.” 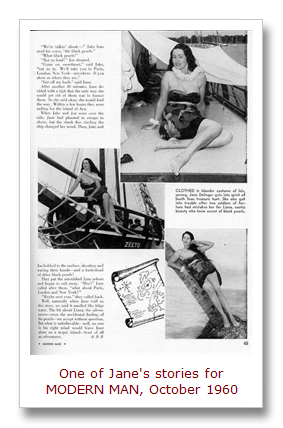 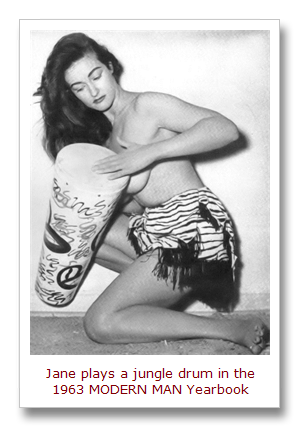 Dolinger was also the Modern Man cover girl in December 1959 and appeared in a jaw-dropping nude photo spread in the February 1965 issue.

In addition to her popular series of articles for Modern Man, Dolinger was one of the few women who wrote stories for men’s adventure magazines. 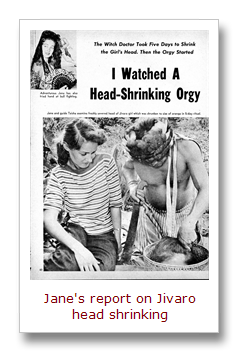 In this story, Dolinger recounts how she watched a Jivaro headhunter transform a young woman’s severed head into a shrunken tsansta. And, she describes the process in vivid detail, starting with this attention-grabbing graf:

“A strange hush fell over the Jivaros. Now all eyes were focused on the basket. The witch doctor’s chant became a frenzied shriek and ended on a high discordant note. My heart pounded furiously and I tensed as I saw the tiwipa’s hand snake into the open basket and bring out the bloody head.

Standing, he held it high, so that all could see. It was the head of a girl — a young girl about 15 years of age. She had long blue-black hair and the color of her skin had turned a sickening white. Her eyes were closed and her pale lips were slightly parted. Dirt and coagulated blood covered the neck where it had been severed from the body.

It was the most gruesome and yet strangely fascinating sight I had witnessed during the past year in the Greater Amazon Basin.”

The article shows photos of Dolinger watching the head being, er, processed. There are other shots of her examining the finished product and a close-up of a collection of shrunken heads that purportedly includes those of two white men. 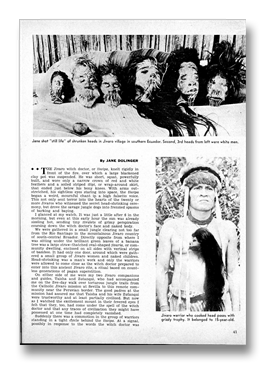 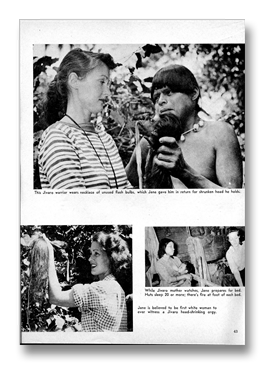 Like most of Dolinger’s stories, this one has a basis in fact and her real travel experiences. But some aspects clearly seem like embellishments. 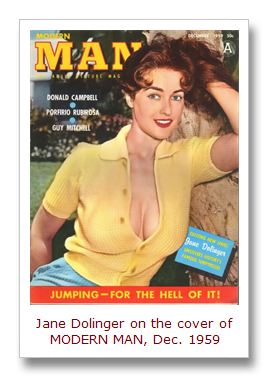 The story of how Jane became an adventure travel writer is amazing in itself. She left her parents’ Pennsylvania home at age 19 looking for a career that would fit her impressive intelligence and adventurous spirit. She ended up in Miami, where she saw a “Help Wanted” ad in the local newspaper that intrigued her. It read:

The ad was placed by the veteran adventure travel author and Hollywood scriptwriter Ken Krippene, who was preparing to head out on an assignment to South America with professional cameraman Bob Farrier.

Dolinger responded to the ad, met with Krippene and the two hit it off.

During the next year, Ken and Jane traveled together to Peru, went deep into the Amazon interior and lived for months with primitive tribes. She developed her own skills as an author. They both wrote magazine articles based on that trip and others that followed, many of which were published in men’s adventure and bachelor magazines.

Not long after their initial travels in South America, Krippene and Dolinger were married. She was in her early twenties. He was in his fifties. They remained happily married and continued their globe-trotting writing careers until Krippene’s death in 1980. 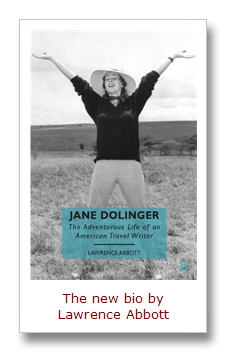 Jane died of cancer 15 years later. When she passed, the world lost one helluva woman.

It’s maintained by Lawrence Abbott, an Instructor of English and Writing at the University of Pennsylvania who wrote the forthcoming biography about her, Jane Dolinger: The Adventurous Life of an American Travel Writer. (It’s on my Amazon.com Wish List already.)

If you’d like to see more of Jane — literally speaking — the most revealing set of pics from her Modern Man articles and nude photo spreads can be found here.

She wrote it several years after her early travels with Ken Krippene. And, there’s a paragraph in it that seems to sum up her satisfaction with the unusual path her life took.

“At the age of 22 I was already a seasoned explorer,” she wrote. “Not that I had planned it that way. But for the grace of God and a cleverly-written help-wanted ad in a Miami newspaper, I probably would still be one of the army of discontented secretaries, stifled with boredom and lost in the endless labyrinth of office routine.”

Thankfully for her legion of fans back then and those of us who still remember her fondly today, “Jungle Jane” didn’t become a secretary.