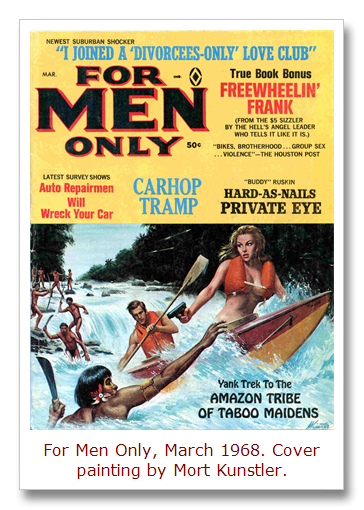 During our recent wars in Iraq and Afghanistan, even the anti-war protesters have been saying they “support the troops.”

It was different during the Vietnam War. And, men’s adventure magazines of the time provide some vivid glimpses of that difference.

This weekend, I was reading the March 1968 issue of the men’s pulp mag For Men Only, which features a rip-snorting cover painting by the renowned illustrator Mort Kunstler.

A few pages in, I was struck by several short news items in the issue’s “Last Minute Memo for Men” department.

“Many of our chest thumping DRAFT CARD BURNERS are phony paper martyrs,” said a section headed MEMO: MEN AT WAR.  “They’re not burning their draft cards at all, only 25-cent PHOTOSTATS. No real guts that might inspire begrudging admiration here.”

The following news bite notes (with apparent approval) that a “favorite pastime” of seamen moored in Viet Nam’s Haiphong Harbor “is betting on winners in the dogfights between Red MIGs and U.S. jets over the city.”

An item on the lighter side reports that a “New York wigmaker says he sells 400 Beatle type hairpieces per month to BOOTS [i.e., newly enlisted or drafted men] shorn in basic training. They stuff them in their pockets, slip them on when in town off base.”

Then there’s this: “Movement underway among PRO-VIET WAR GIRLS to counter the ANTI-WAR HIPPIE chicks’ slogan: ‛GIRLS SAY YES TO MEN WHO SAY NO.’

The patriots’ line is: ‛GIRLS GIVE IN TO MEN WHO GO IN.” 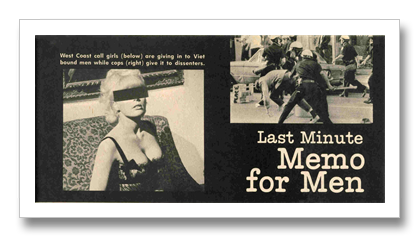 The “girls say yes” slogan suggested to young men that they’d have a better chance of getting laid if they refused to be drafted. This inspiring anti-war ploy was popularized, maybe created, by singer Joan Baez. In the late 1960s, she regularly performed her concerts in front of a banner printed with the slogan. She also posed for a famous/infamous poster that used it.

To me, the girls say yes and no slogans highlight an interesting difference in the political rhetoric used then and now. At the same time, things like the pointed use of the word “patriots” in the For Men Only “news” item shows that, unfortunately, some things never seem to change.

I just report, you decide.